While President Biden’s fiscal policies get much of the credit for contributing to today’s high inflation, there’s more to the story. The Biden-Harris administration’s regulatory agenda adds to the costs of that inflation.

The Foundation for Government Accountability’s Jonathan Ingram highlights the role of regulations in driving up prices in a recent op-ed:

The role of regulations in the inflation crisis is largely overlooked but shouldn’t be. When Washington wraps the economy in red tape, businesses must spend massive sums on compliance.

That cash doesn’t materialize from thin air. Every dollar that goes toward hiring lawyers, filling out paperwork and redesigning products and assembly lines gets passed to consumers through higher prices. Mercatus Center research finds that a 15% increase in federal regulation hikes the cost of consumer goods by a full percentage point.

This puts the president’s regulation obsession in perspective. In its first year, Team Biden added more than 72,000 pages of regulations, executive orders and agency notices. That’s 25% more than the Trump administration added in its first year, according to my review of the Federal Register. Biden’s team also pushed through more major regulations in his first year than any president in modern US history—69 such regulations compared with 22 under Donald Trump and 52 under Barack Obama. 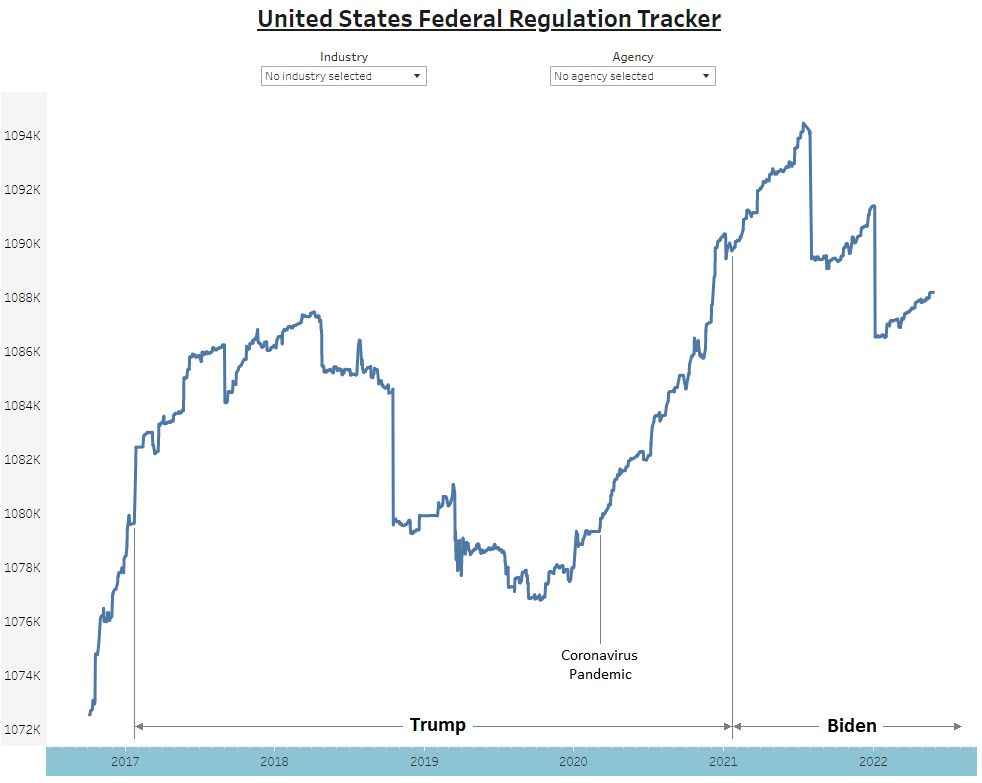 Unlike the Trump administration’s initiative to reduce the government’s regulatory burden on Americans, President Biden’s regulations achieve the opposite outcome. Dan Goldbeck and Dan Bosch of the American Action Forum estimated the burden of President Biden’s new regulations from his first year in office. They find the Biden administration increased Americans’ costs by $201 billion as they forced businesses to do an extra 131 million hours of paperwork.

The Biden-Harris administration’s regulatory agenda costs Americans both time and money. Its costs are being passed through to American consumers through price increases. Suppose the administration wants to get serious about reducing inflation. In that case, it needs to shrink the federal government’s regulatory burden as part of its plan. Assuming the administration ever develops such a plan.