Something amazing happened in 2018. For the first time on record, the estimated cost for Americans to comply with federal regulations will go down instead of up.

That’s the word from Dan Bosch and Dan Goldbeck of the American Action Forum, who found that for the first time since the AAF began tracking their cost in time and money back in 2005, Americans will see a net savings of $7.8 billion in having to comply with newly issued federal regulations.

The chart below shows how that compares with every previous year for which the AAF has compiled data. 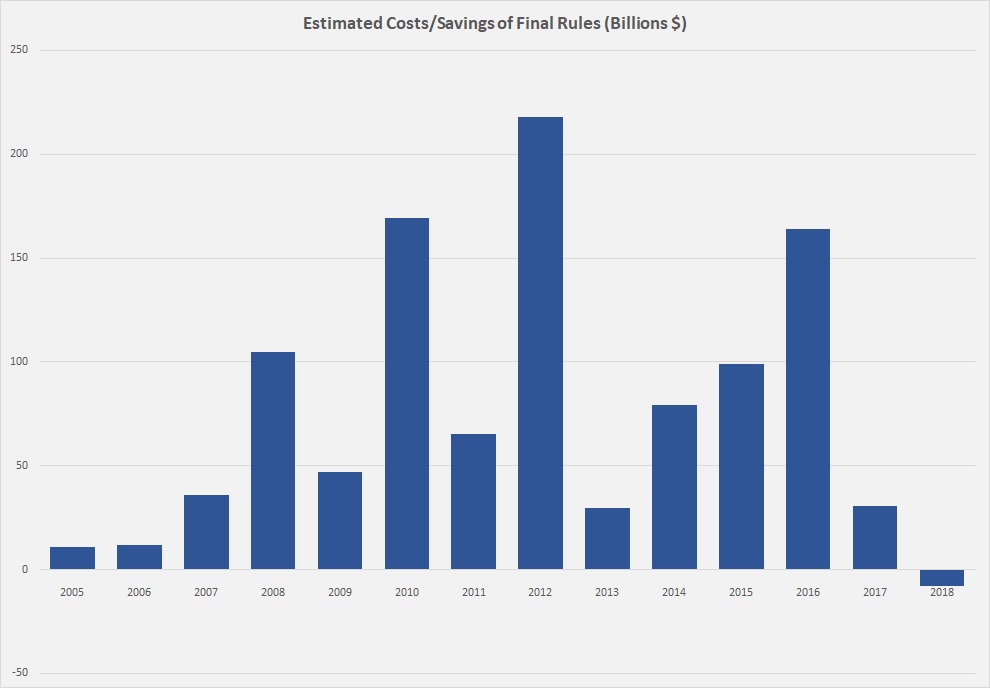 On the downside, Bosch and Goldbeck also found that complying with the 324 regulations that were finalized in 2018 will collectively burden Americans with a net increase of 9.9 million hours of time to complete new paperwork.

Most of that additional paperwork will very specifically burden all the American businesses and farmers who have to deal with the U.S. Department of Agriculture’s newly issued National Bioengineered Food Disclosure Standard, which will require an estimated 20.5 million hours of their time.

Bosch and Goldbeck indicate that this 20.5 million hour increase time cost is an extreme outlier, however. Most other federal agencies issued rules that will reduce the amount of time that the Americans spend with their regulatory paperwork.

Looking more broadly, the year in paperwork was still rather deregulatory on the whole. If one were to exclude the bioengineered food rule, the various paperwork burden estimates in 2018 amount to approximately 10.6 million fewer hours. The rule that cut the most red tape was a Centers for Medicare & Medicaid Services (CMS) rule that cut more than 5.5 million hours. As AAF has noted before, CMS has been one of the more prodigious agencies in cutting paperwork as a part of otherwise mundane payment schedule rules. In fact, out of the top 10 rules in terms of paperwork cuts, six are CMS payment rules that collectively include nearly 11.6 million hours of paperwork reductions. Such a focus on this aspect of the administrative state likely contributed toward the Department of Health and Human Services (which houses CMS) claiming the title of “Biggest Saver” amongst agencies in fiscal year 2018.

Bosch and Goldbeck give credit where it’s due for the achievement in the net reduction in the cost of complying with federal regulations.

The Trump Administration ramped up deregulatory activity in 2018, resulting in government-wide net regulatory savings for the first time since AAF began tracking. It achieved this by more than doubling its final deregulatory action rate. It will have to continue this trend if it hopes to achieve the projected net savings target of $17.9 billion identified in its fiscal year 2019 regulatory budget.

Since I normally cover the government spending and waste beat, coming across this story was an unexpected and pleasant surprise. I’d love to see it become something more than a once-in-fourteen years achievement.