All I Want for Xmas Is Fewer Regulations and Less Paperwork

2019 was another big year for reducing the burden of federal regulations on Americans, continuing a trend that President Trump initiated with Executive Order 13771 on January 30, 2017. That executive order set the goal that for every new regulation the administration generated, an average of two regulations would be eliminated.

That’s something that started off easy, because the administration inherited an abundance of regulations of questionable merit, but has become harder with the passage of time, because the regulatory low-hanging fruit has already been picked, so to speak.

The latest report card from the administration on its regulatory reform progress bears that out. The Competitive Enterprise Institute’s Clyde Wayne Crews has tallied the number for each year from 2017 through 2019.

Back in FY2017, much fanfare was made over the elimination of 67 significant rules while adding only three for a claimed (and challenged) 22-to-1 ratio. Detail on what rules came and went back then is here. The fall Unified Agenda at that time revealed a more modest but successful four-to-one ratio, but on the other hand there had been streamlining of guidance documents and independent agency rules that the administration could have taken credit for back then in its accounting, but did not.

Earlier this year, diving into the spring 2019 Unified Agenda with the fiscal year still a work-in-progress, I found the administration technically still exceeding, but barely, the two-for-one directive with a 2.2-to-one ratio, with 15 rules in and 33 out at the time. I assembled interim details on what the rules were here.

The chart below visualizes the Trump administration’s progress in reducing the federal government’s regulatory burden on Americans: 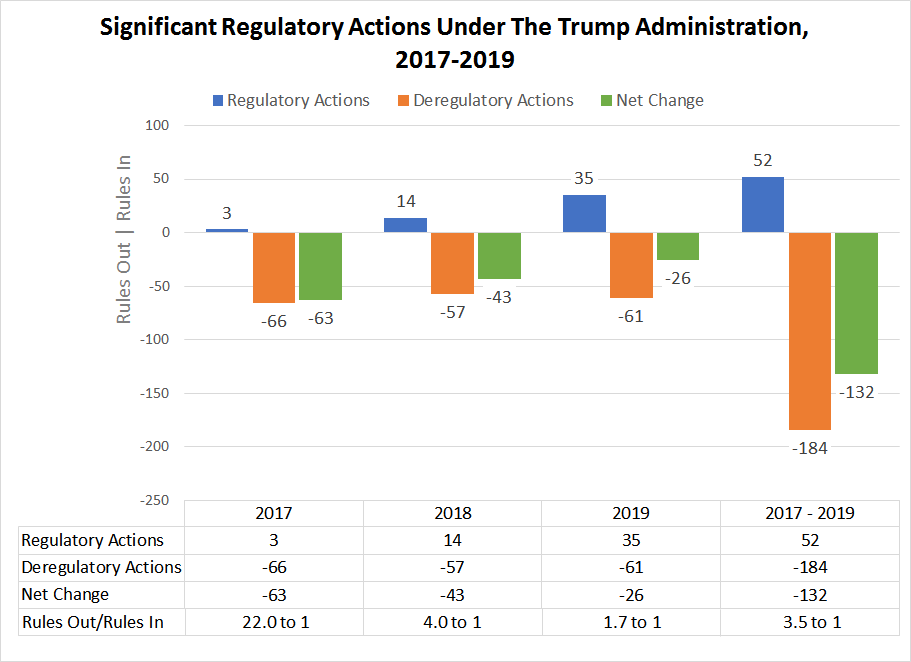 Even though it is becoming harder to eliminate twice as many regulations as it generates with each passing year, it appears the Trump administration will succeed in achieving an average of eliminating two old regulations for each new regulation it creates through 2020. From 2017 through 2019, it has averaged eliminating 3.5 federal regulations for everyone it has introduced.

The Trump administration has claimed its deregulatory actions have reduced regulatory costs by nearly $50 billion and has projected those savings could reach $220 billion once they are fully implemented, saving American households $3,100 a year, although that estimate has been challenged as exaggerated.

Douglas Holtz-Eakin, the former director of the Congressional Budget Office and the current president of the American Action Forum, argues that the Trump administration can do more to save Americans time in complying with federal regulations by focusing on the paperwork federal agencies mandate:

The Trump Administration’s success in controlling regulatory costs has been a regular feature of Eakinomics. But that doesn’t mean that everything is perfectly hunky-dory. For example, as noted by AAF’s Dan Goldbeck, “Despite broader deregulatory efforts, the cumulative amount of paperwork imposed by the federal government has increased by over one billion hours in recent years.” Since the goal of the Paperwork Reduction Act (PRA) was to reduce paperwork, it is pretty obvious that the PRA is not working.

An alternative would be to impose the same kind of budget on paperwork hours that agencies now face for their regulatory costs. This policy should be a relatively straightforward endeavor, as much of the data one would need is already available. As Goldbeck puts it, the Office of Information and Regulatory Affairs (OIRA) “has a repository of the cumulative paperwork burdens imposed by ‘information collection requirements’ (ICRs) utilized by agencies that it updates daily. That establishes a baseline, both overall and on an agency-by-agency level. The ICR clearance process already includes hard estimates of how changes in certain requirements would affect their public burden.”

Saving Americans time by reducing the amount of paperwork they have to do to comply with federal regulations is a ripe source of additional improvement for the Trump administration to pursue. At the state level, an initiative called “Project Re:Form” recently won a design award for its work revamping the 40-page DHS-1171 form the state of Michigan had required applicants for state public benefits program to submit, shortening it by 80 percent while also cutting in half the amount of time the state needs to process it, making government both less costly and less inefficient.

The federal government also has a lot of low-hanging fruit that has yet to be picked. If it’s too late to get that for Xmas, can we at least get it for a New Year’s resolution?