The Origin of Bidenflation

How did today’s high inflation in the U.S. get started?

There is a debate among economists about the causes of the high inflation that defines Joe Biden’s presidency. On one side are President Biden’s economists, who claim their policies are not responsible. On the other side are economists whose arguments are supported by a growing mountain of evidence that says otherwise.

Economists at the Federal Reserve Bank of San Francisco recently published an economic letter confirming the amount of inflation unleashed in the U.S. economy is unique. Here’s the central figure from the letter, which illustrates how different U.S. consumer price index (CPI) has been from other major industrialized nations. 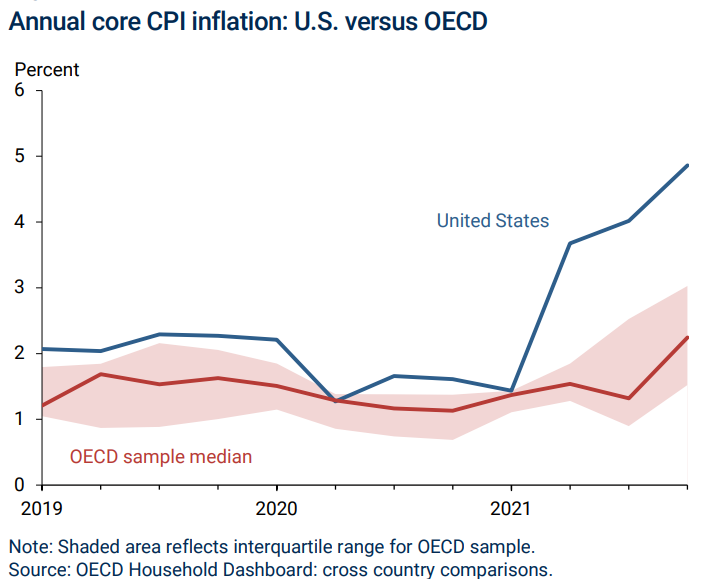 The chart confirms the core CPI in the U.S. exploded upward in the second quarter of 2021. Meanwhile, CPI in the countries of the Organization of Economic Co-operation and Development (OECD) did not. The upward explosion in U.S. inflation follows the passage of President Biden’s American Rescue Plan Act in March 2021.

This policy flooded the U.S. economy with extra stimulus checks and child tax credits through 2021. Many of those who received this income went on spending sprees during that time. The money also enabled many to avoid returning to work as COVID lockdowns were lifted. The result was a guaranteed recipe for inflation because it artificially starved the economy of workers as the demand for goods and services increased.

In a separate analysis, other Federal Reserve economists say President Biden’s economic policies didn’t just create inflation; they exported it to other countries. 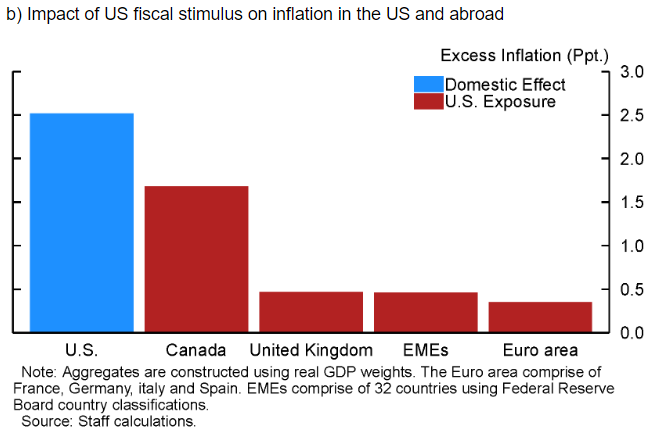 The Fed economists estimate the Biden administration’s policies added at least 2.5 percent of excess inflation to the U.S. economy. President Biden’s inflation added 1.5 percent to Canada’s inflation rate, a country that shared many of the same supply chains as America. Other regions were less affected, seeing less than half a percent added to their inflation rates.

Here’s the bottom line for emphasis:

Biden can talk a good game about “returning our fiscal house to order,” but it’s clear he doesn’t understand why prices are going up—and that his policies will keep them high for the foreseeable future.

It doesn’t help that President Biden’s fiscal policies were shaped by economists who don’t believe they create inflation. They’re in denial because they don’t want to be held accountable for it.