Let’s Start a Tax Revolt with Our iPhones 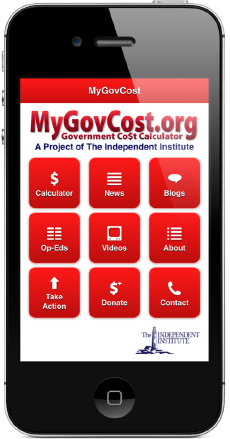 Tax Day is upon us and at the federal level we’re told that Washington spends $3.5 trillion a year. The annual federal deficit stands at $514 billion. The national debt has climbed to $17.6 trillion. All of these numbers are staggering, and that’s the problem. Few people can relate to such large numbers because they obscure a more basic question: What does Washington’s spending cost me?

To answer this question, The Independent Institute created the MyGovCost Government Cost Calculator in 2010. And today the Institute has launched an accompanying mobile app for iPhones and iPads called MyGovCost, which allows people anywhere to find out how much money federal spending is costing them. It’s a personalized number based on information you supply regarding your age, annual income, and education level.

This person’s total federal tax bill through age 80 will be more than $529,000. If instead they had been able to invest this money at an annual rate of 6.1 percent (an historically attainable rate), they would have had a nest egg exceeding $2.7 million.

The MyGovCost app allows our 35 year old to ask herself or himself: Will I get $2.7 million worth of services from Washington? The wars in Iraq and Afghanistan alone will cost this person nearly $9,000 in lost retirement savings. Are these wars worth it?

The free MyGovCost app is now available for the iPhone or iPad on the Apple App Store.

In the nation’s most populous state of California, more people are deciding they’re not getting their money’s worth from government. A new poll finds that 60 percent of Californians say they pay “much more” or “somewhat more” in taxes than they should. Is a new tax revolt brewing in California? Let’s hope so because it’s long overdue in California and everywhere else.