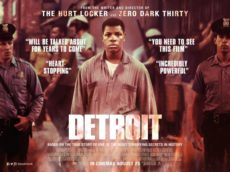 The opening lines in the chyron running with the black and white still photos did not bode well for Kathryn Bigelow’s new film Detroit. The overly simplistic, politically hyped, narrative ran, in effect, like this: During the Great Migration, African Americans moved north to jobs, whites moved out to better jobs in the suburbs, and the city center hollowed out. By implication, the 1967 “rebellion” in Detroit and in other U.S. cities during that sweltering summer was inevitable.

Fortunately, Bigelow’s moving and evocative drama is much more nuanced and layered than this introduction suggests. She delivers a fact-based story that should leave audiences perplexed. Indeed, even those that choose to label these “domestic disturbances” for what they were—race riots—will be asking themselves the big question she doesn’t answer: Why didn’t these riots evolve into the grassroots rebellions that activists hoped they would become? (See also historian and fellow blogger Jonathan Bean‘s work on race riots, violence, and police here.)

Bigelow (The Hurt Locker, Zero Dark Thirty, Point Break) has produced a film on a timely and relevant subject. And the way she chose to tell the story is itself worthy of discussion. The movie begins, sustains itself, and ends on a series of palpable injustices that most Americans would prefer to forget, despite recent police shootings of unarmed black men.

The Detroit riot began when police raided an unlicensed drinking club above a printing company on 12th Street. Eight-two African Americans had gathered to celebrate the return of two local men from the Vietnam War in the upstairs space. No one knows who notified the police, but rather than close the illegal bar and tell everyone to go home, the police arrested everyone in the bar.

Onlookers gathered in the street, started yelling at the police, and a bottle flew at the police. Four days later, 43 people were dead: 33 African-Americans (24 shot by police officers and national guardsmen) and 10 whites. Nearly 1,200 people were injured, 7,231 people were arrested (including a 4 year old and an 82 year old), 2,509 stores lay pillaged or in ruins, and 388 families no longer had homes. Economic damages amounted to between $40 million and $45 million ($293 million and $329 million in 2017 dollars).

With so many victims, choosing a specific point of view for the film Detroit would be daunting. Screenwriter Mark Boal (The Hurt Locker, Zero Dark Thirty) chose to focus on an incident within the riot: The deaths of three African American men and beatings of nine others (including two white women) in the Algiers Motel. The hotel was a black-owned business, one of three purchased by the couple. The hotel was notable in that blacks were prohibited from staying before it was purchased by the new owners. Known as a center for drug dealing and prostitution, local police raided the Algiers frequently. Notably, some of the hotel’s best customers were GM executives who worked at the nearby corporate headquarters.

As the unrest unfolded and the violence escalated, civilians and police became wary and skittish. In fact, two of the victims in the Algiers Hotel were members of the Dramatics singing group (played by Algee Smith, Earth to Echo, Saints and Sinners, The New Edition Story, and Jacob Latimore, The Maze Runner, Collateral Beauty, Sleight) who fled to the hotel amid the chaos on the streets when their concert was cancelled. After taking refuge, they met others partying at the hotel including drug dealers and two young white women (played by Hannah Murray of Game of Thrones and Kaitlyn Dever of American Girl, Short Term 12) claiming to be from Ohio.

The police raid the Algiers after they hear what they believe are gunshots and someone reports sniper fire. The police are joined by national guardsmen. Over the course of the night, the police beat and torture the twelve of the hotel occupants, all civilians, while attempting to wring out confessions and find the gun. The gun, as in the real incident, is never recovered.

Afterward, prosecutors file charges against three of the policemen and a black private security guard (John Boyega, Attack the Block, Star Wars: The Force Awakens, The Circle) who witnessed most of the events. All are acquitted, even though two of the cops confess to taking part in the killings. A judge rules that the confessions are inadmissible because the police officers were not read their Miranda Rights. The defense also argues the deaths were justifiable given the violence and fear surrounding the arrests.

The case was an enormously complex one to prosecute at trial, but Bigelow does an excellent job of weaving a narrative among multiple players that closely resembles the record...at least what is known of the record. She also pieces together events that are not in the record—something noted in the movie—but not in a way that unfairly slants the story. In truth, the Algiers Motel incident is an example of tragedy and shocking injustice, the outcomes driven by racism and prejudice, and an appropriate allegory for the times.

At the same time, Bigelow doesn’t fall into the storytelling trap of ennobling political activists and radicals. She keeps the story grounded in the very real human terror inflicted on the defenseless men and women subject to whims of an armed, unaccountable police force. She conveys the chaotic nature of the street violence, random looting, willful destruction of property, and attacks on emergency response personnel trying contain the fires. (Two firemen were killed during the riots.)

She also gives her characters layers. Detroit is an ensemble movie, with each of the subjects showing a different side to the incident without ever justifying the brutality and injustice of the police actions. Even the racist cop, Philip Krauss (Will Poulter, The Maze Runner, Chronicles of Narnia: Voyage of the Dawn Treader, The Revenant), who orchestrated the emotional and physical torture is shown for his human weaknesses beyond rote racism, including fear and panic when he steps over the line. Similarly, the black security guard who witnessed most of the events, and who was armed at the time, is shown as a conflicted man, walking a tightrope between intervention and preserving his own life.

Detroit is not about any one individual, but how violent events can overwhelm individuals while opening the door to evil. Bigelow immerses the audience in the chaos through well-choreographed camera work and subtle story transitions showing that no one was safe during the riot. All who participated were victims in some sense although the injustices were disproportionately meted out.

While one would hope an event as brazen and shocking as the Algiers Motel incident would not happen in 2017, recent more isolated cases involving panicked officers shooting unarmed civilians keeps the specter of this tragedy relevant and visible, and Detroit relevant to our times.

See also The Beacon blog posts by Jonathan Bean on race, violence, and the police here, and the Detroit Riot here, here, and here. His book Race and Liberty in America can be found here.