The Trump administration has often trumpeted its effectiveness in reducing the number of regulations that U.S. government agencies impose on regular Americans and businesses. But since the arrival of the coronavirus pandemic, the number of new regulatory restrictions issued by federal agencies and departments has exploded, reversing much of the progress the Trump administration had made. 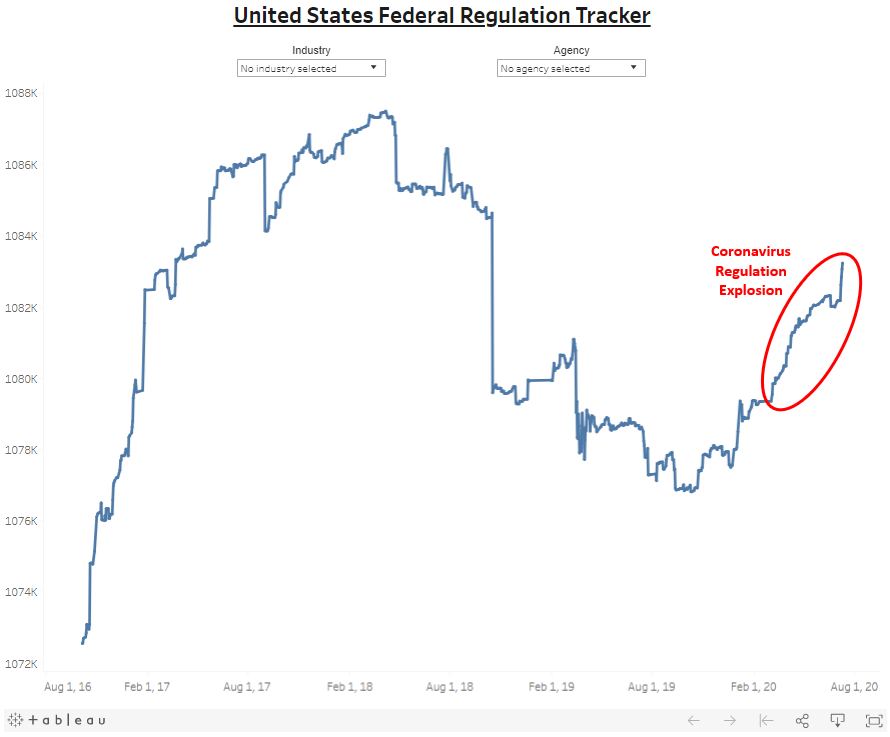 That explosion builds on a reversal in the downward trend that began in late 2019. What’s surprising about the new surge in federal regulations is that the majority of new restrictions have not been issued by the agencies playing the most significant roles during the coronavirus pandemic. The pie chart below reveals which agencies have contributed the most to the net increase. 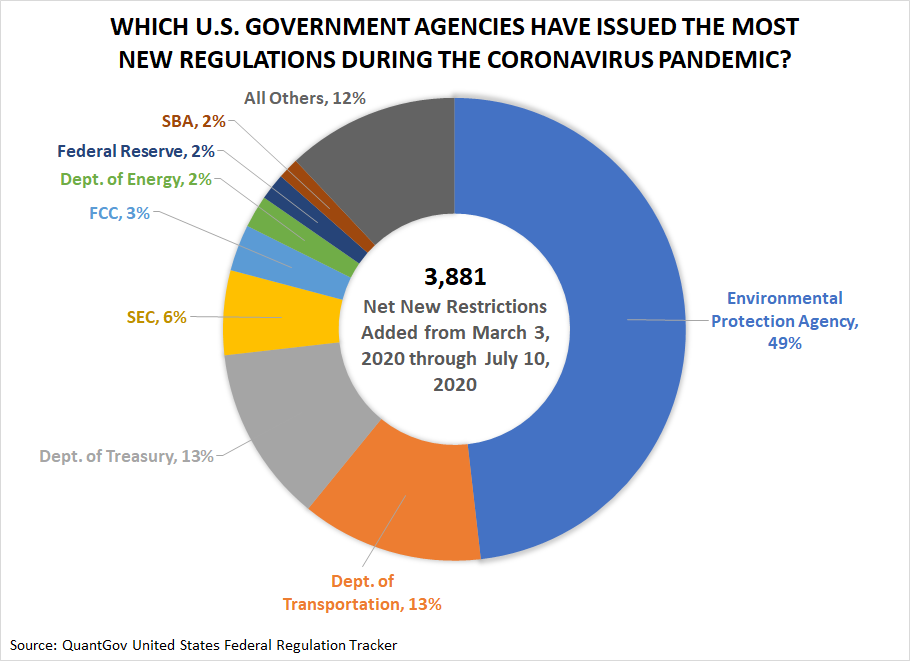 The Environmental Protection Agency (EPA) has been the most active issuer of new restrictions, accounting for 49 percent of the net increase during the first four months of the pandemic by itself. The Departments of Transportation and Energy, along with the Securities and Exchange Commission (SEC) and Federal Communications Commission (FCC), combined to add another 24 percent of the total net new regulations.

Meanwhile, the Treasury Department, the Federal Reserve, and the Small Business Administration (SBA) together account for just 17 percent of the 3,881 net new regulations. That small percentage is very surprising considering that each has been especially active in pumping out trillions of stimulus dollars and loans to aid distressed American families and businesses.

Writing at the American Action Forum, former Congressional Budget Office director Douglas Holtz-Eakin wonders whether or not the Trump administration is now past peak deregulation:

The Trump Administration deregulatory juggernaut has been a centerpiece of its economic policy. Indeed, in 2017, 2018, and 2019 the executive agencies racked up three consecutive declines in regulatory budgets. AAF’s Dan Bosch, however, documents the latest data from the Office of Information and Regulatory Affairs (OIRA) may have already passed “peak deregulation.”

Specifically, OIRA released the most recent (“spring” 2020, released on June 30) version of the semiannual Unified Agenda of Regulatory and Deregulatory Actions which outlines nearly 2,700 rulemakings expected to be the agency workload over the next year. As Bosch puts it, “What jumps out in the data is that the number of active actions that are tagged as both ‘significant’ (those with economic impacts of at least $100 million annually or raise novel policy issues) and ‘deregulatory’ (those with net savings) are outnumbered by those tagged as both significant and ‘regulatory’ (those with net costs).”

That raises two possibilities. The first is that the administration has changed its tune and is interested in pursuing more regulation. Or, more likely, the opportunities for finding regulations with net savings must be diminishing. If so, comparing counts of significant deregulatory actions and significant regulatory actions over the past indicates that peak deregulation occurred in the spring of last year. The failure to continue reducing the regulatory burden is not an indictment of the administration’s reliance on regulatory budgets. Even in an era of rising regulatory costs, the use of budgets provides the incentive to implement each rule as efficiently as possible.

When it comes to regulations, the U.S. government is now going in a very different direction than earlier. That change means regular Americans and businesses will be increasingly burdened by their costs.