Tax Cuts and Tariffs: Policies at Odds with Each Other

In his two and a half years in office, President Trump has enacted two major fiscal policy initiatives: tax reform legislation and tariffs on foreign goods imported to the United States. According to Bloomberg, the cost of tariffs may soon exceed the benefits of tax cuts for middle-earner households by a big margin:

Here’s how the math works: middle earners got an average tax cut of $930 for the tax overhaul passed in late 2017, according to the Urban-Brookings Tax Policy Center. The tariffs already in effect cost the average household about $831, according to research from the New York Federal Reserve.

Add in the additional tariffs on another $300 billion in Chinese goods that Trump proposed in May, and is still considering, and that increases the cost for an average family of four to about $2,294 annually, according to research from “Tariffs Hurt the Heartland,” a coalition of business groups.

Here is what those numbers look like in a graph: 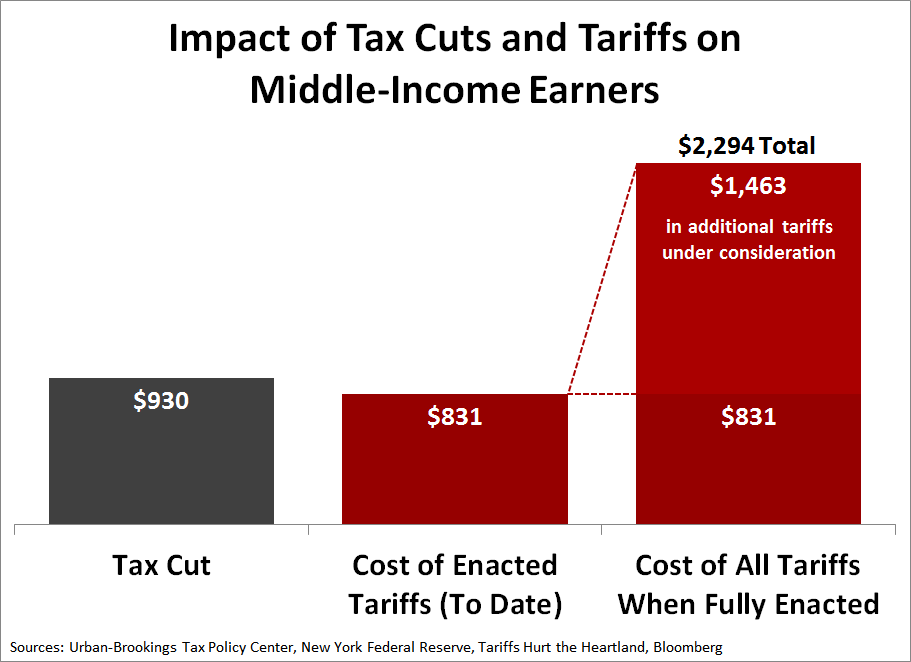 Since tariffs are taxes, the net cost to a middle-income earning American household would be $1,364 if all these tariffs go into effect, with the tariffs wiping out the benefit of the president’s tax cuts.

The good news is the aforementioned tariffs that President Trump was set to impose on imported goods from Mexico now appear to be indefinitely on hold, so at least the costs of tariffs are no longer set to grow as high as feared.

Meanwhile, if the pending tariffs on Chinese-produced goods bound for the United States go into effect, middle-class Americans would be justified in seeking additional income tax cuts to compensate for the added costs.

If U.S. farmers can claim they deserve additional bailouts from China’s tariffs on U.S. goods to compensate for their loss of income, there is no legitimate reason to exclude regular U.S. taxpayers from a similar benefit.