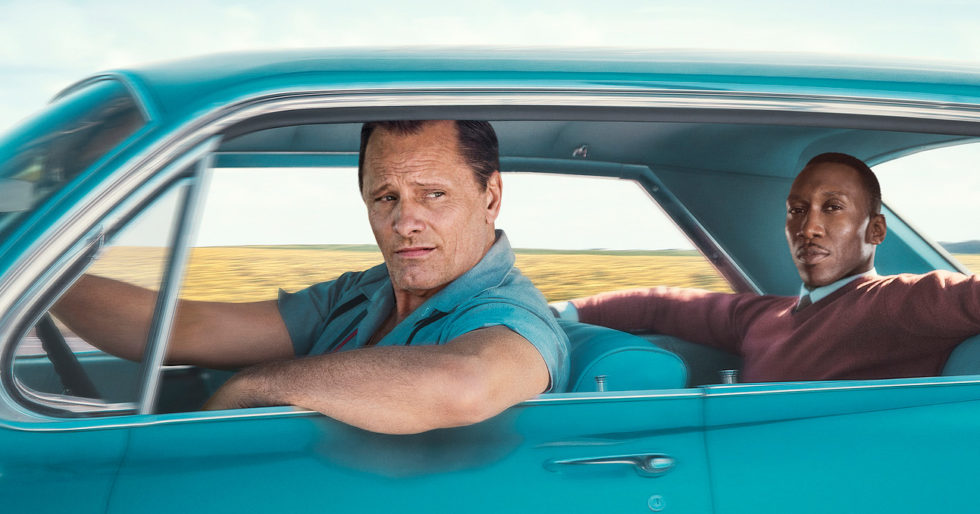 One of the big winners during movie awards season this year appears to be Green Book, a compelling historical drama about race in America. The movie, however, rises above jingoistic answers to America’s race problems and takes time to ponder layered questions of individuality, identity, and class. As a result, Green Book joins the ranks of several other notable films that explore America’s complicated history with race, including Hidden Figures, Moonlight, Detroit, Marshall, and Loving, just to name a few.

The movie takes its name from The Negro Motorist Green Book, a booklet that provided listings of motels and restaurants that would cater to traveling African Americans during segregation. Rooted in a true story, Frank “Tony Lip” Vallelonga (Viggo Mortensen, Lord of the Rings trilogy, Captain Fantastic, A Dangerous Method) is a street smart Brooklyn native working as a bouncer at the famed Copacabana nightclub in New York City in the early 1960s. He is a devoted family man to his wife Delores (Linda Cardellini, The Avengers: Age of Ultron, Mad Men, Bloodline) and two sons. He’s also a racist, a fact established early. In early scenes, he throws away drinking glasses used by two African American men repairing his kitchen and engages in prejudiced banter with his Brooklyn friends while speaking Italian.

When the Copa closes for renovations, Frank’s out of a job. Strapped for cash, but too proud to admit it to his wife, he hustles for work. He ends up pawning personal belongings for cash to make ends meet.

When Frank is contacted by an associate for a job as a driver, he agrees to the interview, not realizing that his boss is Don “Doc” Shirley (Mahershala Ali, Moonlight, Hidden Figures, Marvel’s Luke Cage), a world-renowned classical and jazz pianist living above Carnegie Hall. He is also black. Shirley has earned doctorates in psychology, music, and liturgical arts. He is also a prodigy, performing with the Boston Pops at 18 years old and the London Philharmonic at nineteen. Mahershala Ali earns his Golden Globe award-winning and Oscar nominations with his performance as the refined, cultured, and well-educated performer who undergoes his own transformation.

The conflict that drives the story—a cultured African American in segregated America versus the unrefined hard knock street smart Italian American from Brooklyn—is pretty evident. But the story and movie run much deeper and along many more layers than many might see at first.

The plot follows the real world story. Shirley is booked for a series of performances that extend into the Deep South. They start in Pittsburgh, then drive to Indiana, Kentucky, and even deeper into Mississippi and Louisiana. This travel itinerary gives the movie an unusual and compelling plot arc. Shirley and Vallelonga stay in five-star hotels and dine in the top restaurants while starting out their tour in Pennsylvania. The quality of their accommodations, however, steadily deteriorates. The social climate also begins to plummet as the pair drive into increasingly racialized communities. Shirley’s need for a driver, who is really a bodyguard, becomes apparent.

To the movie’s credit, the early confrontations with racism do not start in the South. Vallelonga and Shirley travel from Pittsburgh to Bloomington, Indiana. When Vallelonga arrives at the concert hall where Shirley is scheduled to perform, he finds that the piano is not the Steinway specified in the contract, and is out of tune. When confronted, the stage manager at first refuses to honor the signed agreement. The incident becomes Tony’s first test of his duty to uphold his agreement with Shirley as well as his core sense of common decency. The incident also triggers introspection on the part of Tony.

This racist act in the movie is a non-trivial plot point and rooted in the history of racism above the Mason-Dixon Line. At its height, 30% of Indiana’s native-born white men were members of the Ku Klux Klan. While scandal brought the organization down as a political force, the Klan was clearly tapping into deep-seated attitudes about race well into the 1960s (and even today by some accounts) even though state and local laws did not enforce legal segregation as they did in the Deep South. From Indiana, Tony escorts Shirley into additional venues, ever deeper into the Jim Crow South.

As Tony witnesses the social pressures and expectations that haunt Shirley, and the challenges of doing what should be an easy gig, he evolves. Similarly, Tony’s love for his wife and family strike a chord with Shirley. Their personal relationship deepens as Shirley helps Tony write letters back to Delores. (The letters were also real.) Each concert brings a new challenge to Tony and Shirley as both characters come to grips with their own sense of personal identity within much larger and encompassing personal contexts of love, relationships, work, ethics, and priorities. The climactic scenes take place in Birmingham, Alabama as well as a smaller “Sundown Town”—a town where curfews required blacks to be indoors at night. Both Tony and Shirley are challenged with how far they will bend to the oppressive and humiliating social pressures of segregation.

Green Book has been nominated for Best Picture, Best Actor (Viggo Mortensen), Best Support Actor (Mahershala Ali), Best Original Screenplay, and Best Film Editing for the 2018 Academy Awards. It’s already won a Golden Globe for Best Motion Picture (comedy), Best Supporting Actor, and Best Screenplay. With these accolades, and many more, Green Book is likely to be a front runner for wins in its categories.

Green Book earned these nominations. It’s also earned an important place in America’s ongoing discussion about race. The movie’s frame of individual human dignity is a welcome touchstone for mediating the conflict and chronic misunderstandings that permeate current public debate and discussion.

Samuel R. Staley is a Research Fellow at the Independent Institute and Managing Director of the DeVoe L. Moore Center in the College of Social Sciences at Florida State University. He is a contributing author to the Independent books, Property Rights and Housing America.
Posts by Samuel R. Staley | Full Biography and Publications
Academy Award Nominee Green Book Jim Crow Racisim
Comments
Before posting, please read our Comment Policy.