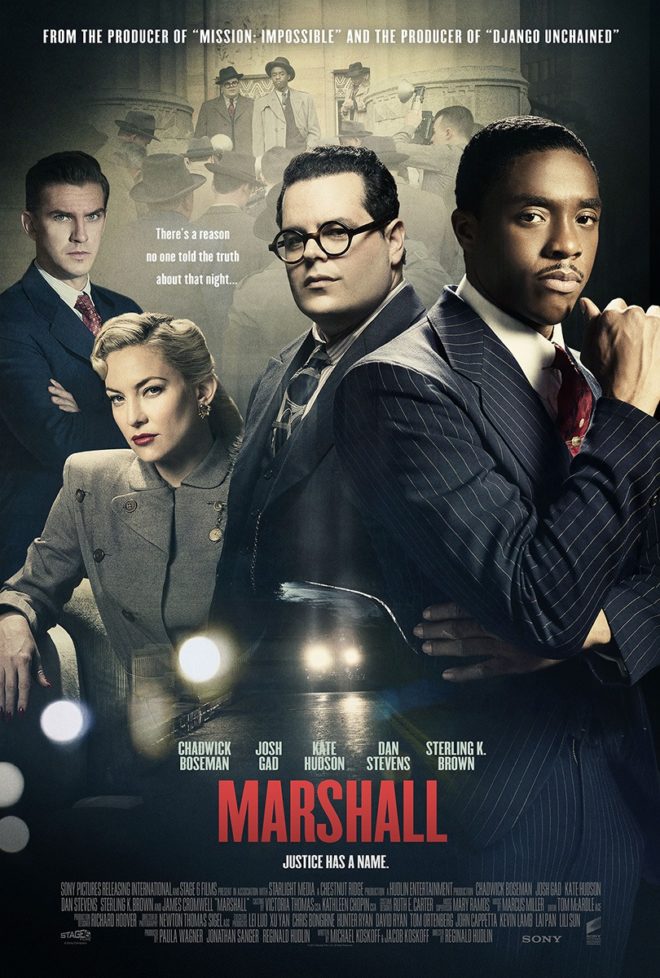 Marshall, the biopic of the illustrious and path-breaking civil rights attorney Thurgood Marshall, is an important reminder about just how deep-seated racism and prejudice were in American society (and some say still are). Well acted and evenly paced, the film is a worthy addition to a growing list of good films depicting layered aspects of the African-American experience and the fight for justice. (Other moves include Hidden Figures, Loving, Fences, Twelve Years a Slave.)

Some viewers might find the content of Marshall unfamiliar because so much of the contemporary discussion of racism targeting African Americans centers on the South under Jim Crow and slavery. The American Civil War is well over one hundred years old. Jim Crow and its racially segregationist laws were legally dismantled in the 1960s. Most history books give short shrift to the ways racism was institutionalized in social and cultural institutions in northern states. But the entire nation has been struggling with the consequences of both legal (de jure) and de facto racial segregation since colonial courts sanctioned slavery in the 1660s.

Thus, Marshall’s setting, 1941 Greenwich, Connecticut, is important to the story as well as raising awareness of a much neglected part of the twentieth century Civil Rights Movement. The story centers on a now largely forgotten criminal court case, The State of Connecticut vs. Joseph Spellman. Prosecutors charged African-American chauffeur Joseph Spellman (Sterling K. Brown, This is Us, Army Wives) with raping and then attempting to kill wealthy socialite Eleanor Strubing (Kate Hudson, Almost Famous, Nine, Deepwater Horizon). After sixteen hours of interrogation, Spelling confessed to the crime.

But the details and publicity surrounding the case attracted the attention of the NAACP and its principal trial attorney, Thurgood Marshall (Chadwick Boseman, 42, Get On Up, Captain America: Civil War). Marshall was already well known for his challenges to legal segregation in the South, and even argued cases successfully before the Maryland Supreme Court. The NAACP dispatched him to Greenwich, Connecticut to investigate and potentially represent Spelling.

In Connecticut, Marshall is paired up with Samuel Friedman (Josh Gad, Frozen, A Dog’s Purpose, Beauty and the Beast), a white Jewish lawyer who, in the film, is more interested in working civil court cases than courting controversy in a criminal case. Friedman attempts to get off the case, believing his representation of an African-American would undermine his professional reputation and ostracize him within the wealthy community of Greenwich. A racist judge (James Cromwell, Babe, Star Trek: First Contact, The Green Mile), however, requires him to continue as local counsel in a transparent attempt to stack the deck against Spellman. Marshall coaches Friedman through the case, developing the strategy and instructing him on its execution.

Strong performances by Boseman and Gad, as well as almost the entire supporting cast, hold the film together. Boseman effectively convey’s Marshall’s aptitudes as a confident, privately thoughtful, and clever legal strategist. One particularly salient scene has Marshall advising Friedman to draw out the sordid details of Spellman’s past while on the stand—child abandonment, dishonorable discharge, and accusations of thievery. This would neutralize the sensationalism attached to Spellman’s backstory and mitigate the negative impact from the prosecution’s cross examination. Meanwhile, through Marshall’s coaching, the film shows Friedman transform from a meek, unsophisticated insurance lawyer to a grounded civil rights advocate.

On the whole, Marshall is a well constructed and executed courtroom drama with a strong lesson about the enduring importance of racism and prejudice. This point comes home in the climactic scenes when Louisiana born and bred Spellman, caught in a lie, reveals that the consequence of telling the truth in the South would be a lynching. Viewers see how the brutal injustice of Jim Crow corrupts the criminal justice system in the North, unleashing simmering prejudices and racial hatred that reinforce cultural if not legal segregation and oppression.

For all its strengths, however, the director and screenwriter make a creative choice that may well undermine the film’s credibility for informed audiences. In a move apparently intended to maintain creative tension and keep forward momentum in the story, the screenwriters chose to use Friedman’s character as a metaphor for white disinterest and then conversion to the cause of civil rights. The film notes in the concluding scenes that the real Samuel Friedman rose to prominence as a civil rights attorney and advocate, but implies this reputation followed the Spellman case. In real life, Friedman was apparently a competent attorney and strong civil rights advocate. While the case would have certainly elevated his profile, Friedman’s nephew says his uncle’s reputation as an accomplished attorney and civil rights advocate were well established prior to the case.

Moreover, Thurgood Marshall’s on-screen attempts to convince the fictionalized Friedman of the overarching importance of civil rights litigation undermines the film’s ability to demonstrate one of Marshall’s most well recognized intellectual and practical legacies: modern public interest law. Individual court cases are tactical plays in a long-term strategy focused on embedding fundamental principles and values in law. The film conflates this prescient understanding of legal strategy with Marshall’s attempt to educate his reluctant co-counsel on the value and tactics of criminal court proceedings.

Narrative films, however, should not be confused with documentaries. Screenwriters often change, combine, eliminate, or add characters to serve the purpose of the story. In this case, however, by diminishing the reputation of a real person, the director and screenwriters trivialize an important part of the history of the U.S. Civil Rights Movement. White support, and Jewish support in particular, was an essential component for financing and leveraging many of the successes of the movement. An early scene alludes to this fact when Marshall’s supervisor at the NAACP suggests a win in the Spellman case would be important for generating private financial support for their public interest litigation efforts.

Writing a stronger character for Friedman would not have diminished the iconic status or significance of Marshall—who ended up winning all but three of the 33 cases he argued before the U.S. Supreme Court—the NAACP, or the NAACP Legal Defense Fund. It also would have strengthened the historical accuracy of the film and given the real-life Friedman his due for his courageous work at the time.

One final note: Don’t skip the credits. The filmmakers have included an audio clip of the real Thurgood Marshall at the end.