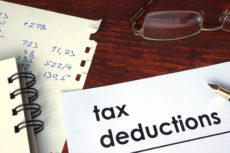 In a recent post in The Beacon, I said that President Trump’s tax reform proposal is a move in the right direction. But I find part of it very troubling: He wants to keep the mortgage interest deduction and the deduction for charitable contributions for individual taxpayers.

Both of these deductions have reasonable justifications, but so do a host of other deductions; both those in the current tax code and some that various interest groups would like to see added. Arguing that these two should be kept rather than eliminating all deductions speaks to the power of the interest groups that support them. That tells us right away that any tax reform that does occur will be shaped by special interests, and that additional interests are likely to enter the tax reform conversation to modify the tax code for their own benefit. Indeed, President Trump’s bargaining position begins by acknowledging that these interests can’t be beat, so should be accommodated.

On the surface, the deduction for charitable contributions makes some sense, in that the help many charities give to those in need reduces the demand for government services. However, many charitable contributions find their way to amenities favored by the rich, like art museums and symphony orchestras, or to public policy organizations that push the agendas of their donors. I’m all in favor of private charity, but don’t see why the tax code should treat it differently from any other expenditure.

Prior to 1986 all interest payments were deductible, and President Reagan wanted to eliminate that deduction to help cover the cost of lower rates for everyone. He almost did it, but the real estate industry was too powerful a lobby, so while all other interest deductions were eliminated, the home mortgage interest deduction remains. By keeping it in his proposal, President Trump is acknowledging that in 2017 the real estate industry is too powerful a lobby to defeat, just as they were in 1986.

In addition to standing out as a glaring nod to the power of these entrenched special interests, President Trump’s endorsement of those deductions opens the door for other special interests to plead their cases as the debate on tax reform begins. Why should the tax code accommodate some interest groups but not others? The tax code is the mess it is today because of the ability of interest groups to have it modified for their benefit. President Trump should not have started the tax reform debate by acknowledging that some interest groups are too powerful to be beat.

Both of these deductions are claimed mostly by upper-income people. A better proposal would have eliminated all deductions, and incorporated lower rates for everybody. It’s a bad idea to acknowledge the influence of special interests over the tax code before negotiations for tax reform have even begun. My objection is not so much with these specific deductions, but with the implied recognition that when it comes to tax reform, some interests are too politically well-connected to oppose.