Trump’s Tax Plan: A Move in the Right Direction 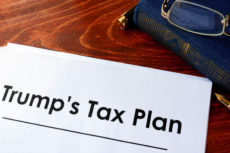 President Trump released an outline of changes he hopes to see in the federal income tax. If his proposal became law, we would have a better tax system than we do now.

One major change would be reducing the corporate income tax rate from 35% to 15%. The US has one of the highest corporate tax rates in the world, which is responsible for the “tax inversions” and other corporate financial manipulations that keep revenues from US corporations overseas. Rather than trying to pass regulations to prevent this activity, a better policy is to make it attractive for corporations to do business in, and keep their revenues in the United States.

On the personal income tax side, rates would be lowered slightly and most deductions would be eliminated, compensated for by a doubling of the standard individual deduction. Only deductions for charitable contributions and home mortgage interest would remain: a testimony of the effectiveness of the lobbying done by non-profit organizations and real estate interests. Slightly lower rates would be a slight improvement, as would simplifying the tax code.

Trump also calls for eliminating the estate tax. There are obvious interests that will push back on this, calling it a tax break for the rich, but the fact is that income tax has already been paid on the money that people leave in their estates, and the estate tax amounts to a double tax. Of course, some will argue that the rich should be double-taxed, and I’m guessing this recommendation will meet with substantial resistance as the debate goes ahead.

Those are the major changes, and they (along with the smaller changes Trump recommends) all have solid arguments to support them. If it’s a choice between the current tax code and one that implements these recommended changes, we’d be better off taking Trump’s tax package. We’ll see where the debate goes on this. There will surely be compromises along the way, and while I don’t like to be pessimistic, my guess is that the compromises will all make Trump’s proposals worse.