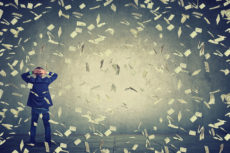 It seems like Venezuela always provides great classroom examples for all the wrong reasons.

I’ve written on this blog multiple times about the government of Venezuela and the polices it has enacted. I’ve argued that falling oil prices aren’t to blame for the country’s troubles and that the once-high oil prices only masked the underlying shortages caused by government policy. I’ve discussed how the major price controls put in place in Venezuela have made it difficult to impossible for people to find goods ranging from toilet paper and feminine hygiene products, to meat and flour.

Here we are again. The Venezuelan government is once again proving its complete ignorance of basic economics. Its people are paying the price. According to the BBC, Venezuelan president Nicolas Maduro announced that the country’s minimum wage and pensions would increase by 50 percent in an effort to combat the country’s rampant inflation, which the IMF projects will reach 1,600 percent this year. The monthly wage will now be over 40,000 bolivars—about $60 at the official exchange rate ($12 on the black market). For perspective, this is about enough money to purchase a single pair of pants.

In discussing the minimum wage increase (the fifth in the past year), Maduro stated, “To start the year, I have decided to raise salaries and pensions. In times of economic war and mafia attacks...we must protect employment and workers’ income.”

Yikes. Where do we start?

First, the idea that the minimum wage will protect workers and their income is fallacious. Here’s another of those “economic zombies” I discussed last week. The fact of the matter is, when you make things more expensive, people buy less. This holds true for everything—from lemonade to ladders to labor. By making workers more expensive, employers will be faced with tough decisions on how to recoup their losses. They will likely have to cut work hours or fire their employees.

Second, such measures will do precisely nothing to combat inflation or stabilize the overall price level. As the late economist Milton Friedman once said, “Inflation is always and everywhere a monetary phenomenon.” That is, inflation is caused by an increase in the money supply.

Increasing the amount of money in the system or mandating higher wages does nothing to increase wealth. As economist Antony Davies explains in this short video,

The prices of goods and services adjust to reflect the change in the money supply. As more money is printed, it will take more of the devalued currency to buy the same goods and services as before. Therefore, increasing the amount of money in people’s pockets doesn’t increase their wealth or make them better off at all!

Now many countries don’t mind some inflation. In fact, many governments “target” an inflation rate of 2 to 3 percent per year. Venezuela, however, is on the verge of (or perhaps already in the grips of) what’s called “hyper inflation.” This occurs when a country experiences rapid price increases and a fast erosion of the real value of its currency. While most people wouldn’t notice if the price of their goods increased by 2 percent over the course of year, they’d certainly notice if the price increases by 500 percent.

The results are never good.

In Weimar Germany, for example, waiters climbed on tables to announce new prices every half hour. Workers collected their wages in wheelbarrows. People used banknotes as kindling. Children played with worthless marks, turning them into kites and other crafts. Others used money as wallpaper. Throughout history, other countries have struggled under the crippling effects of hyperinflation. Zimbabwe and Hungary offer two other well-known examples.

Unfortunately, those who suffer the most under these policies are the people of Venezuela. Hard-working people are watching helplessly as the money in their pockets becomes practically worthless. They wait in endlessly long lines for a chance at purchasing the few goods on the shelves. They look at their savings and their retirement accounts and realize they have no way of recouping their losses. Now, with yet another increase in the minimum wage, workers will have to again worry whether or not their jobs will be there in the coming weeks and months.

Oh, Venezuela, while I love good examples for principles lectures, I’d be thrilled if you’d stop giving me so many.