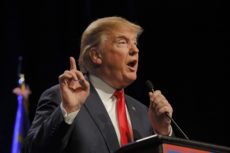 A few months back, I wrote on Donald Trump’s run for the White House and his economic policies. At the time, I noted that, love him or hate him, he’d gone farther than pretty much anyone had anticipated.

I have to admit that I was surprised that Trump secured the Republican nomination for the Presidency, but the Republican National Convention last week left no more room for doubt. Trump is the GOP nominee.

Several people asked me what I thought of the RNC. Until the last night, I was honestly able to respond with, “I haven’t watched, but hear it’s been a show.” Alas, on the final night of the convention, my husband turned on the TV as Mr. Trump was speaking. What I heard him say made me both remarkably sad and incredibly angry.

The number of new illegal immigrant families who have crossed the border so far this year already exceeds the entire total from 2015. They are being released by the tens of thousands into our communities, with no regard for the impact on public safety or resources.

One such border-crosser was released and made his way to Nebraska. There, he ended the life of an innocent young girl named Sarah Root. She was 21 years-old, and was killed the day after graduating from college with a 4.0 Grade Point Average. Her killer was then released a second time, and he is now a fugitive from the law.

I’ve met Sarah’s beautiful family. But to this Administration, their amazing daughter was just one more American life that wasn’t worth protecting. One more child to sacrifice on the altar of open borders. What about our economy?

Following his speech, Trump took some serious heat for his remarks. This criticism was wholly justified. In fact, Trump couldn’t be more wrong on immigration.

Alas, this is not the first time that Trump has accused immigrants of possessing inherent criminal tendencies. In the past, he’s referred to Mexican immigrants in particular as criminals, drug dealers, and “rapists.”

As I noted in my earlier blog, this narrative simply fails to match up with the statistics. Study after study after study has found that both illegal and legal immigrants are less likely to commit crimes or be put in jail than their native counterparts. (See here and here for additional examples and sources.)

In a similar way, Trump’s concern for the “resources” taken by immigrants once again doesn’t stand up to empirical investigation (or a two-minute search of any internet search engine, for that matter). Ku and Bruen, for example, found that when it comes to public benefits like Medicaid and the Supplemental Nutrition Assistance Program (SNAP), low-income immigrants use these services at a lower rate than native-born individuals.

Moreover, a practical mountain of studies has found that immigrants, illegal included, pay far more in taxes than they receive in public assistance. In fact, according to the Department of Agriculture, the agency that administers food stamps, immigrants have poured into Tennessee, Alabama, the Carolinas, and other states with exceptionally low welfare benefits—but many jobs. In 2011, the Institute for Taxation and Economic Policy released a study showing that undocumented immigrants paid $11.2 billion in state and local taxes in 2010 alone. A 2013 study by the OECD found that documented and undocumented immigrants consistently add significantly more to the economy than they use in public services. The study found the average immigrant household in the U.S. made a positive annual contribution to the U.S. economy of about $11,000.

The truly wretched part of all of this is that, despite decades of data to dispute the claims made by Trump and others, they have become remarkably popular. Instead of recognizing all of the incredibly good things immigrants, both legal and illegal, do for the US economy and for US citizens (not to mention the positive impact on things like global poverty), these people are used as easy scapegoats for people displeased with modern America.

In total, I watched about three minutes of the RNC.

It was three minutes too much.