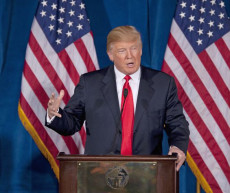 Regardless of whether you find him remarkable or repulsive, there is no denying that the political machine known as Donald Trump has gone further than pretty much anyone anticipated. From winning key early races, to garnering a massive number of general election voters, there is the real possibility that Trump could be the GOP presidential nominee.

While supporters offer many reasons for backing Trump, many cite his stance on immigration reform as a key issue. That is, Trump proposes to make immigration policies much more strict. The following is directly from his campaign website.

When politicians talk about “immigration reform” they mean: amnesty, cheap labor and open borders. The Schumer-Rubio immigration bill was nothing more than a giveaway to the corporate patrons who run both parties.

From here, the website provides a laundry list of proposed reforms to tighten immigration. Trump suggests “making” Mexico pay for a border wall, “requiring” businesses to hire American workers first, increasing the prevailing wage for H-1B visas (in an effort to price immigrant labor out of the market), tripling the number of ICE officers, and changing the law so illegal immigrants are automatically deported.

Any economist (or anyone vaguely familiar with how a budget or politics works) should look askance at any number of these policies. It’s doubtful that many of these policies could ever be successfully implemented.

But the more important issue is if such policies should be implemented and the reasons the Trump campaign offers for such immigration rules. When we look at the facts, Trump’s claims simply don’t hold water.

When he announced his presidential campaign, Trump stated that many immigrants coming into the U.S. are criminals. He referred to Mexican immigrants in particular as criminals, drug dealers, and “rapists.”

If we look at the facts, however, we find that study after study has found that immigrants of all varieties, legal and illegal, are less likely to commit crimes or be put in jail than their native counterparts. (See here and here for additional examples and sources.)

Trump’s plan also calls to cut off welfare support for immigrants, citing concerns that many come to “leech of the system.” Once again, however, the data does not support this claim. Looking at immigrant use of public benefits like Medicaid and the Supplemental Nutrition Assistance Program (SNAP), Ku and Bruen found that low-income immigrants use these services at a lower rate than native-born citizens. In fact, as opposed to draining the system, numerous studies have found that immigrants consistently pay far more in taxes than they receive in public assistance. According to the Department of Agriculture, the agency that administers food stamps, immigrants have poured into Tennessee, Alabama, the Carolinas, and other states with exceptionally low welfare benefits—but many jobs.

When it comes to issues of immigration, it’s important we get the facts right. It’s easy to blame immigrants for the U.S.’ current economic and social problems. They’re an easy scapegoat. But the fact of the matter is, getting rid of the immigrants won’t solve any problems and would actually make life significantly worse for natives. What Trump and so many other people fail to see are the benefits that all immigrants, regardless of their legal status, bring to the table. Immigrants boost the economy and bring new people and ideas together. Immigrants, illegal and legal alike, create jobs, contribute greatly to the country to which they immigrate, and are less likely to be in jail or use public assistance than their native counterparts.

Build a wall around bad ideas and bad policy, not borders.