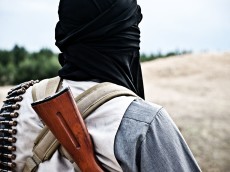 File this under the category of “I told you so.”

In 2014, I wrote a piece on the idea of arming “moderate” Syrian rebels. The threat posed by the Islamic State, known also as ISIL or Deash, led many in Congress and President Obama to call for hundreds of millions of dollars to assist rebel forces.

I argued this was far from a good idea. I pointed out that the U.S. government has a track record of gifting weapons to those fighting those entities considered “unfriendly” to U.S. interests. Between 1970 and 1979, for example, the U.S. government sent some $74 billion in weapons abroad. Fueled by Cold War tensions, similar trades took place up until the early 1990s. Although the USSR collapsed and communism is no longer considered the predominant threat, the trend of giving arms to groups has continued ever since.

The idea behind such transfers is straightforward, by equipping those sympathetic to U.S. interests with weapons, the government hopes to defeat their opposition while decreasing or eliminating the “need” for U.S. troops.

While this may sound all well and good, the reality is not nearly as simply. I argued that these plans are doomed to fail. Put simply, these plans assume that the U.S. government can identify a problem, construct a solution, and effectively implement it. It neglects the fact that any intervention abroad involves operating in a highly complex system. Success requires an intimate knowledge of politics, economics, and religion, among other things. Moreover, any foreign intervention impacts hundreds of thousands, if not millions of people. It is absolutely impossible to know ex ante how these actors will react to a new policy, and how their reactions will cause other changes. This often results in positively disastrous consequences.

Consider the case of Afghanistan. In 1979, the U.S. government chose to arm a rebel group sympathetic to U.S. interests in an attempt to drive out the Soviets. While the policy did have the desired short-term effects—the USSR withdrew from the country—the long-term consequences left much to be desired. Those same rebels, who were once described by President Reagan as “freedom fighters,” formed the basis of the Taliban. Decades later, these once “moderate” rebels were on the receiving end of a U.S. invasion.

Alas, bureaucrats tend not to learn from their mistakes or those of their predecessors. The U.S. government began sending weapons and aid to Syrian rebel groups. They delivered some 50 tons of ammunition, in a single night alone. The U.S. government did not just arm one group, but attempted to coordinate dozens of rebel groups to achieve a common mission.

What could possibly go wrong?

The LA Times recently reported the following headline, “In Syria, Militias Armed by the Pentagon Fight Those Armed by the CIA.” The article reported how different parts of the U.S. government provided weapons and aid to different rebel groups. These various groups, now fighting for control over various parts of Syria, are shooting at each other. Pentagon-provided guns are shooting at CIA-provided guns, in an outcome so predictable and tragic it’s practically Shakespearean.

There’s no need to worry, however. In early March, President Obama authorized a new program to train and arm Syrian rebels. This comes after suspending the initial program intended to do the same. According to the LA Times article,

[The initial program experienced] a string of embarrassing setbacks which included recruits being ambushed and handing over much of their U.S.-issued ammunition to an Al Qaeda affiliate.

In discussing the current problems in Syria, representative Adam B. Schiff (D-CA) stated that, “It [arming the groups and the current clashes] is part of the three-dimensional chess that is the Syrian battlefield.”

This one quote provides no better illustration of the hubris of policymakers. They have overwhelming confidence in their own abilities to fix problems of other societies, despite decades of example after example pointing to a need for humility and a check of “grand plans.” Instead of appreciating the complexities of the world in which we operate, they treat humans as pawns, pieces they can control on some supposed chess board.

What’s truly tragic in this scenario is that the people of Syria continue to suffer. Embroiled in a civil way that has lasted for more than five years, they are no better off today than they were when the U.S decided to “help” by sending weapons. In fact, many may be considerably worse off. The full consequences of these actions may not be seen for years. By then, those who pushed to send weapons to Syria will be long out of office, and a new crop of lawmakers will believe that, they too, can use their “expertise” to fix whatever crisis may appear down the road.