Death Valley? Peter Thiel and Steve Jobs on What Could Kill Silicon Valley 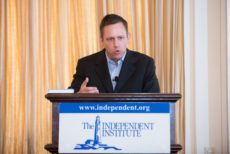 On January 27, legendary entrepreneur Peter Thiel told a packed house at an Independent Institute luncheon, at the Olympic Club in San Francisco, that to blaze new trails ask: “What important truth do very few people agree with me on?” One of mine is that California will not be the epicenter of the tech industry someday. But why would this happen and how long will it take?

Creativity is just connecting things. When you ask creative people how they did something, they feel a little guilty because they didn’t really do it, they just saw something. It seemed obvious to them after a while. That’s because they were able to connect experiences they’ve had and synthesize new things. And the reason they were able to do that was that they’ve had more experiences or they have thought more about their experiences than other people.

Unfortunately, that’s too rare a commodity. A lot of people in our industry haven’t had very diverse experiences. . . . The broader one’s understanding of the human experience, the better design we will have.

Steve Jobs’ diverse experiences included tinkering with machinery as a boy, dropping out of college and attending calligraphy classes, exploring India and studying Buddhism, living on an apple farm, pursuing electronics in a home-based computer club, and being a pot-smoking lifelong Beatles and John Lennon aficionado.

Free-spirited product gurus like Steve Jobs, who are driven by experience, curiosity, exploration, and synthesis, are not drawn to insular and regimented environments. They are drawn to Silicon Valley because, in the words of Peter Thiel, it is the “center of the counterculture in our society today.” But this crucible of innovation could be destroyed.

In his talk for the Independent Institute, based on his bestselling book Zero to One, Thiel said that we have lived recently in “a period of globalization with somewhat more limited technological progress—a lot [of innovation] in computers and the world of bits, not so much in the world of atoms.”

The reason for this is government regulation: “[F]or the last 40 years, we’ve lived in a world where bits were relatively unregulated, atoms were more or less regulated to death. And that’s a political explanation for why we’ve had this strange dichotomy.”

But as bits and bytes become integrated into the world of atoms, i.e., into physical products such as smartphones, automobiles, and “the internet of things,” there will be growing pressure by threatened interests to regulate these physical things “to death,” thereby killing the creative environment that gives rise to tech innovations. We are already seeing this in California and elsewhere, and it threatens the long-term survival of Silicon Valley.

To protect taxi companies, California lawmakers are imposing ever-more expensive and clunky regulations on ride-sharing companies such as Lyft, Uber, and Sidecar. Home-sharing services, such as Airbnb and HomeAway, are also in the crosshairs. Many local governments, worried about losing hotel and tourism taxes, are imposing increasingly burdensome rules on home-sharing services, which threaten their business models and tie them up with expensive litigation. And the Federal Aviation Administration recently shut down the flight-sharing service Flytenow. Bits tied to atoms are starting to be regulated to death.

As this continues, Silicon Valley will eventually resemble K Street in Washington, D.C., where lobbyists and lawyers fight over how to divide industry profits. Company CEOs, with sales and marketing backgrounds not product backgrounds, will focus on increasing market shares by 1 percent, instead of inventing the next insanely great thing.

Nothing is revolutionary or countercultural about the K Street model, and it will drive away creative talent, leaving behind an insular and stagnant Silicon Valley and perhaps entire U.S. tech industry. Other nations can rush in to fill the void.

If you think this doomsday scenario cannot happen in Silicon Valley, all you have to do is look to Detroit. As Thiel noted:

General Motors was a technology company in the 1920s–the car companies were all super innovative–it probably was still sort of a tech company in the ‘50s, by the ‘80s investment in GM was a bet against German and Japanese innovation. So there is an arc were these things change.

Detroit was a booming, innovative city with a vast network of automobile manufacturers, parts suppliers, and shippers. Scale and network economies were the glue that held it together. But a combination of excessive costs, foreign competition, and bloated local government caused the car companies and the city of Detroit to collapse spectacularly.

Thiel noted that there is incredible value to being part of a heavily networked location such as Silicon Valley, but it comes with a huge risk:

Disturbingly, California is able to get away with putting quite a significant regulatory burden on its industries. . . . [T]he state was able to dramatically increase marginal tax rates in 2012 and it did not actually lead to any exodus whatsoever. People are sort of stuck . . . stuck in these network-effect-like industries [tech in northern California and entertainment in southern California] where people can’t leave.

The part that is dangerous about the California dynamic: that when you have super networked industries it’s possible that policy can go incredibly far wrong before anybody notices [such as in Detroit]. . . . The risk in California is not that we have some gradual decline, but that it gets pushed and it goes over the cliff completely. But I think we are still a ways away from that.

Perhaps, but maybe the tipping point is closer than anyone thinks as the policy attacks on applied technology escalate. It is not too late to reverse course with new policies so that California can continue “building the future” and hopefully prove my “truth” wrong.