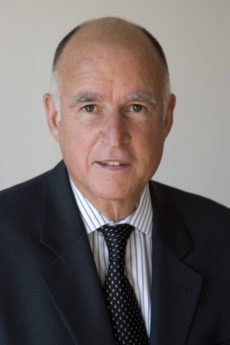 As a teenager, Jerry Brown left Santa Clara University to attend a Jesuit seminary, intent on becoming a Catholic priest. Moral arguments in the context of public-policy debates have always been important to him. So during his inaugural address on January 5, as he became California’s governor for an historic fourth term, Brown quoted biologist Edward O. Wilson regarding climate change: “Surely one moral precept we can agree on is to stop destroying our birthplace, the only home humanity will ever have. . . . [W]e are needlessly turning the gold we inherited from our forebears into straw, and for that we will be despised by our descendants.”

Unfortunately, Governor Brown chose to focus moral outrage on the climate issue alone, and he failed to make the moral argument against California’s public pension system, which represents the state’s greatest financial challenge since the Great Depression and is a severe threat to future generations.

In his speech, Governor Brown said: “[W]e must not lose sight of our long-term liabilities. We have to face honestly the enormous and ever growing burden of the many commitments we have already made. Among these are the costs of pensions and retiree health care . . .”

He said further: “My plan has been to take them on one at a time. We have now taken steps to deal with the unfunded teachers’ pensions and those of the [state] public employees.”

But by any measure, the piecemeal approach has failed, and public pension reforms thus far have been inadequate. As noted by the New York Times: “Changes in the [California] state employee pension system approved last year [2012] do not, in the view of most analysts, come close to addressing the long-term pension liabilities over the horizon.” And the state legislature will likely backslide on its CalSTRS teachers’ pensions funding plan, approved in 2014, once the additional payments begin to really pinch.

CalPERS estimated that the 2012 reforms will save the fund between $42 billion and $55 billion over 30 years, while CalSTRS said it will save $22.7 billion over 30 years. These savings might sound substantial until one realizes total unfunded liabilities for these two pension behemoths are at least $275 billion. Significant reforms are still needed, and the moral case for change is strong.

The failure to fully fund the pension promises is a moral failure: allowing the current generation to receive public services that they are not fully paying for, and pushing the costs onto future generations.

The unwillingness to confront the true scope of California’s pension costs, to pay for the promises made, and to make changes to control future obligations means these costs are being pushed onto our children and grandchildren, who are being used as piggy banks to pay for promises they did not make and for services they did not agree to. The injustice of this system is apparent to anyone who cares to see.

Left unchanged, the financial burden of the pension system will crush our children and grandchildren, leaving them with a depleted future and a depleted California. The responsibility to fix this problem is as great as any moral imperative because it directly impacts the quality of life our children will enjoy and their chances for upward mobility.

Governor Brown should put pension reform at the top of his agenda to help restore the California dream. My forthcoming book, titled California Dreaming: Lessons on How to Resolve America’s Public Pension Crisis, explains how six reforms would fix California’s pension crisis permanently in an equitable, responsible, and moral way. The book is a blueprint for reform, not just for California, but also for the rest of America.

Courageous political leadership will be needed to get the reforms in California Dreaming adopted. Governor Brown told the New York Times in August 2013: “I’ve said there needs to be more pension reform.” As he enters his final term as governor, now is the time for Brown to pursue additional, meaningful changes.

In his inaugural speech, Governor Brown said: “[T]he challenge is to build for the future, not steal from it, to live within our means and to keep California ever golden and creative, as our forebears have shown and our descendants would expect.” Governor Brown is in a position to live up to these words by being the elder statesman on pensions, to stand above partisanship and demonstrate true political leadership by helping to permanently solve the pension crisis. This is the moral thing to do.