Thirteen Outstanding Books of the Past Decade

The end of a year or a decade tempts many of us to make up lists of the best or the worst of things—events, movies, songs, books—during the interval that is coming to a close. Having consumed many such lists, I now undertake to produce one of my own, with a twist.

The twist is that I cannot in good conscience represent my list as one that contains the best books of the past decade. My reading is much too limited for me to make up such a list, and I have no doubt that many excellent books were published that I did not read. However, I have read some excellent books that were published between 2000 and 2008, and I list them here with brief notations in order to bring them to the attention of readers who may not have read them. I present them not with an endorsement of everything they assume, affirm, or argue, but as the works of intelligent, thoughtful, and careful authors. Most of these books are works of exceptionally deep scholarship.

I list them chronologically, but I do not order or rank them here in any other way. 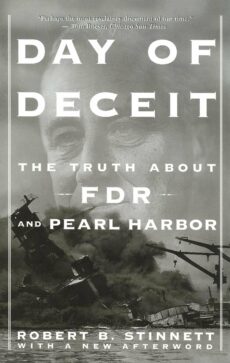 1. Robert B. Stinnett, Day of Deceit: The Truth about FDR and Pearl Harbor (New York: Free Press, 2000). Stinnett carried out an extraordinarily dogged search, involving many interviews with people directly involved and many years of digging in archives, formerly classified documents, and other sources, for answers to the two great questions: who knew what, and when did they know? Members of the Establishment will not like his answers, but they cannot accuse Stinnett of bias against Roosevelt: even after finding compelling evidence that U.S. leaders knew the Japanese attack of December 7, 1941, was coming, he continues to believe that the president acted properly by deliberately bringing the United States into World War II through the “back door.” 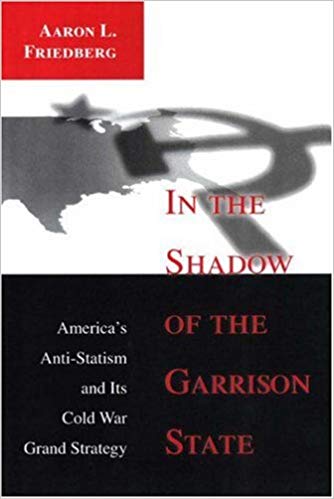 2. Aaron L. Friedberg, In the Shadow of the Garrison State: America’s Anti-Statism and Its Cold War Grand Strategy (Princeton, N.J.: Princeton University Press, 2000). I have argued that the crisis of World War II did much to promote statism in the United States. Friedberg argues, with impressive scholarship, that this outcome might have been much worse, and he explains in great detail why it wasn’t. 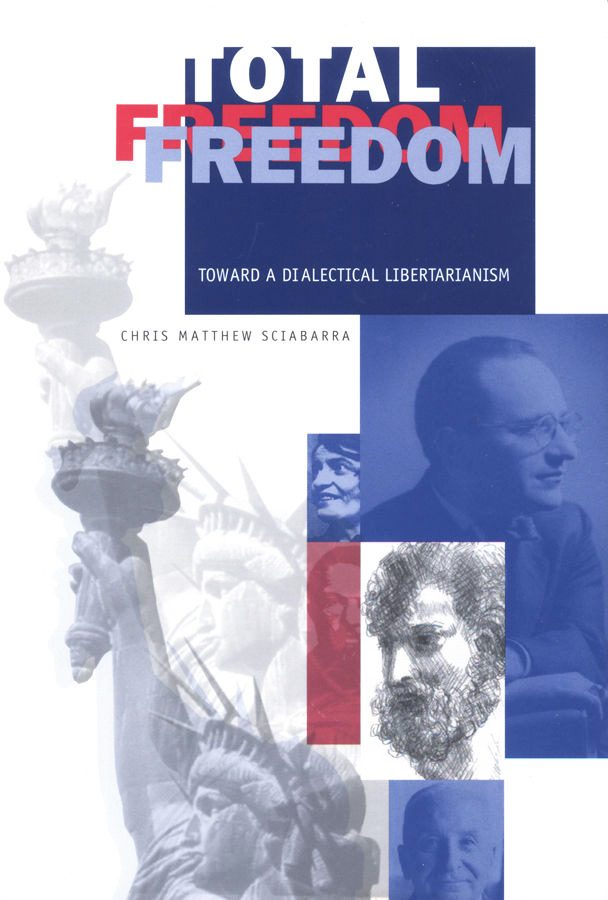 3. Chris Matthew Sciabarra, Total Freedom: Toward a Dialectical Libertarianism (University Park, Pa.: Pennsylvania State University Press, 2000). Sciabarra’s deeply-learned book ranges from Aristotle to Murray Rothbard. If you think of dialectics as grist only for block-headed Hegelians and other odd ducks, this book will change your mind. The greater part of it is given over to what is arguably the most sophisticated analysis ever made of Rothbard’s oeuvre. 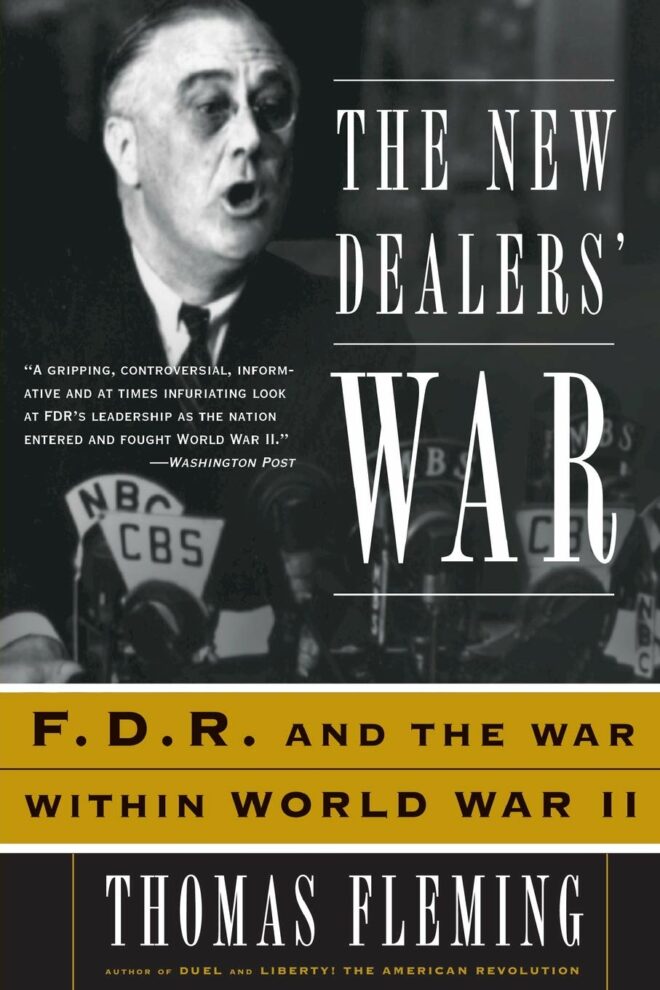 4. Thomas Fleming, The New Dealers’ War: F.D.R. and the War within World War II (New York: Basic Books, 2001). War, said Clausewitz, is the continuation of politics by other means, but war does not bring politics by the usual means to an end. Indeed, if anything, it sharpens and enlarges normal politicking because the stakes are greater than during peacetime. Because Fleming is not a Roosevelt idolater, but he is an exceptionally good historian, his book offers a refreshing antidote to the countless hagiographical works that have glorified Roosevelt and his lieutenants for their actions during the greatest of all wars. 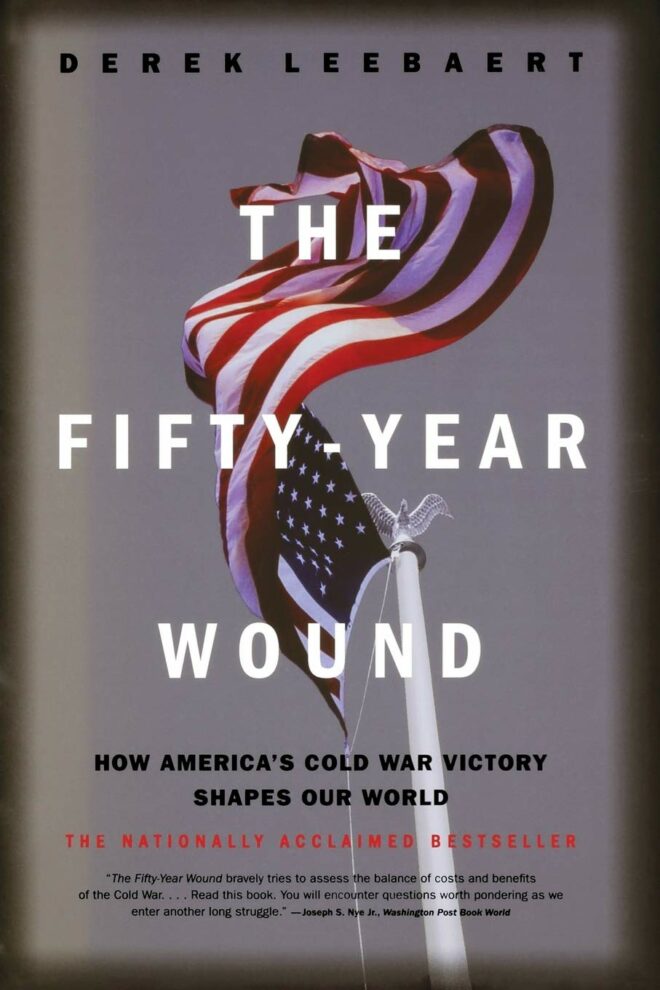 5. Derek Leebaert, The Fifty-Year Wound: The True Price of America’s Cold War Victory (Boston: Little, Brown, 2002). A highly informed, wide-ranging survey by an author who writes with an insider’s familiarity and an outsider’s detachment. Even if you disagree with his interpretation from time to time, as I did, you are certain to learn a great deal. 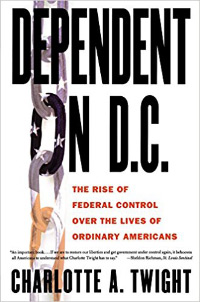 6. Charlotte A. Twight, Dependent on D.C.: The Rise of Federal Control over the Lives of Ordinary Americans (New York: Palgrave Macmillan, 2002). How exactly did the politicians bring us during the past century into our current inextricable entanglement in the welfare state? The road was paved with a great deal of lying and scheming by self-serving politicians. Twight’s forte is extraordinarily careful and complete documentation, combined with a novel analytical framework of her own design. 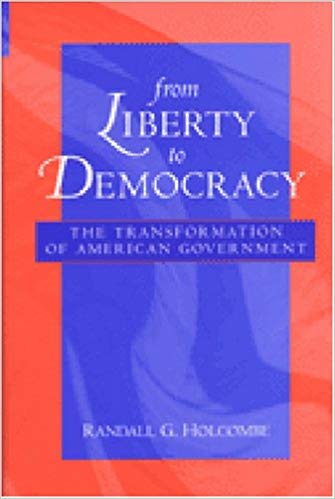 7. Randall G. Holcombe, From Liberty to Democracy: The Transformation of American Government (Ann Arbor, Mich.: University of Michigan Press, 2002). The Americans of the late eighteenth century fought a revolution for liberty, but during the centuries that followed, the revolutionaries’ descendants tended to substitute democracy for liberty, until, in our day, they had greatly expanded the former and greatly diminished the latter. Holcombe’s account carries us smartly from the colonial era to the twenty-first century. 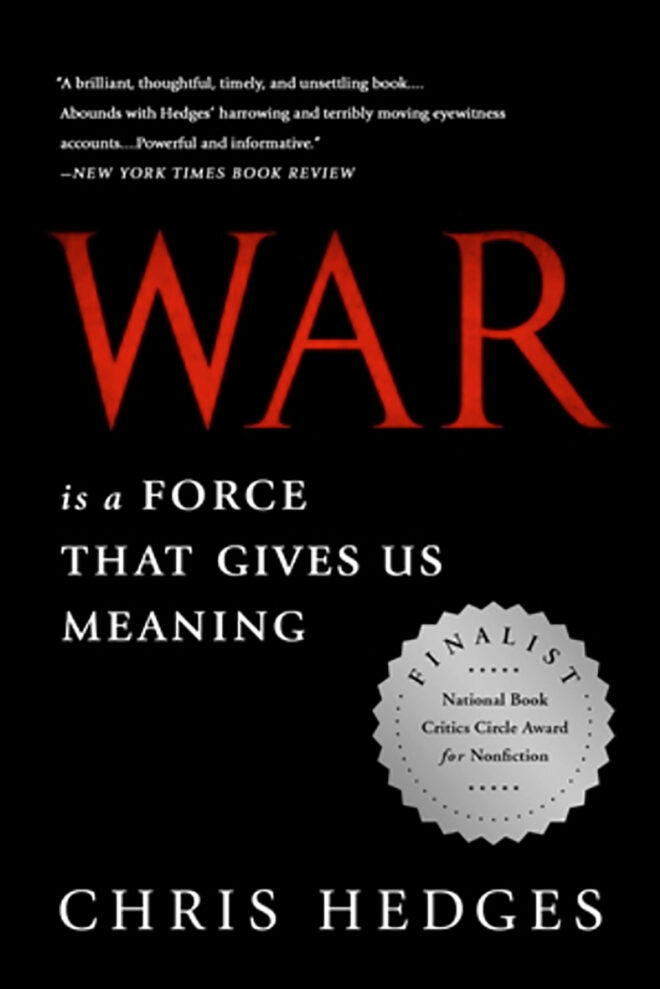 8. Chris Hedges, War Is a Force that Gives Us Meaning (New York: Random House, 2002). Journalist Hedges spent a great deal of time at the scene of wars. What he saw, though occasionally relieved by acts of humanity, was for the most part vile and disgusting, and hardly any different from vicious criminality writ large. If you’ve ever imagined war as glorious or uplifting, you need to read this book. 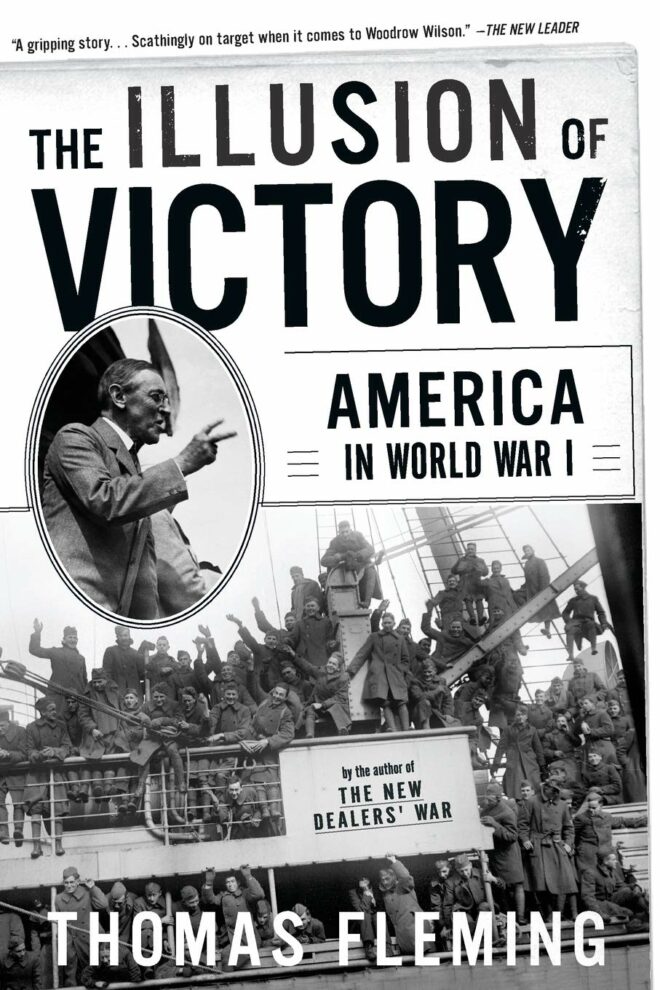 9. Thomas Fleming, The Illusion of Victory: America in World War I (New York: Basic Books, 2003). The prolific Fleming brought out this book only two years after the publication of his book on World War II, but it rests on reading and thinking that must have been done over a long period. Of all of the great mistakes that American “statesmen” have made, plunging the United States into the cauldron of the Great War was arguably the worst, because of the horrible train of events it set in motion in many parts of the world. 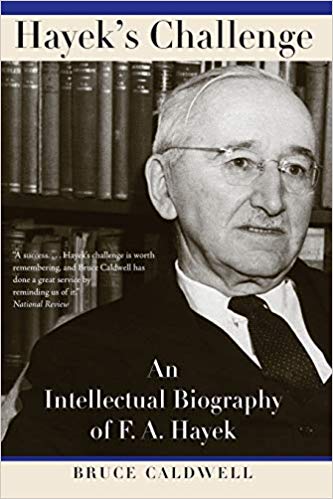 10. Bruce Caldwell, Hayek’s Challenge: An Intellectual Biography of F. A. Hayek (Chicago: University of Chicago Press, 2004). Hayek’s interpreters tend to be disciples or opponents. Caldwell, in contrast, approaches Hayek’s thought with a true scholar’s outlook. His book is replete with detail, context, and nuance. To my knowledge, it is by far the best work available for conveying an understanding of what Hayek accomplished and failed to accomplish as a social thinker. 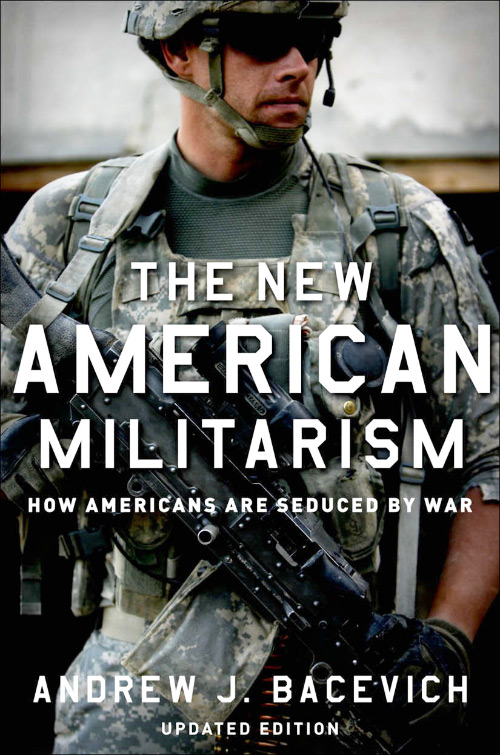 11. Andrew Bacevich, The New American Militarism: How Americans Are Seduced by War (New York: Oxford University Press, 2005). A retired Army officer with a Ph.D. in history from Princeton, Bacevich combines an insider’s understanding with adherence to scholarly standards and a genuine passion for saving the country from the disasters that spring from its current love affair with militarism and from the U.S. military’s global interventions. Although his misunderstanding of the international economics of oil demand and supply leads him astray in places, he has for the most part an excellent grasp of the socio-political role the military now plays in American life. 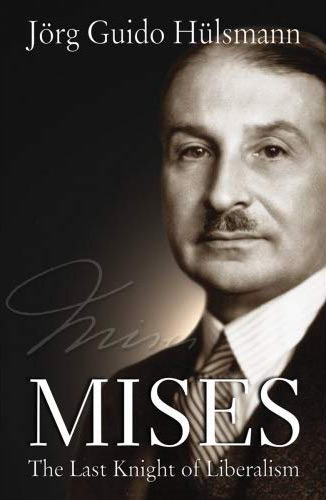 12. Jörg Guido Hülsmann, Mises: The Last Knight of Liberalism (Auburn, Ala.: Ludwig von Mises Institute, 2007). If I said I don’t love this book, I’d be lying. Not only do I wish I had written it; I wish that I had the talents and intelligence to have written it. Alas, I can only recommend this beautifully written volume to everybody as one of the very best books I’ve ever read: the product of deep and wide scholarship, it presents a fascinating account of the life, times, and intellectual activity of the twentieth century’s greatest economist. You can also learn a great deal from the book besides what it teaches you about Mises himself. 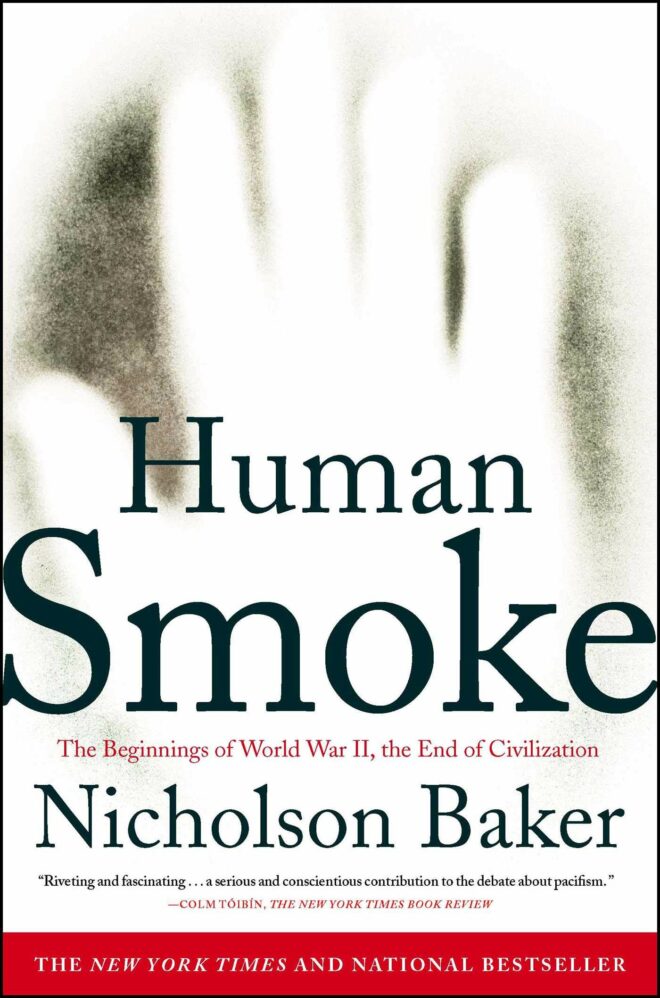 13. Nicholson Baker, Human Smoke: The Beginnings of World War II, the End of Civilization (New York: Simon & Schuster, 2008). Few books have moved me as deeply as this one. An unusual work, it is a sort of organized scrapbook of brief news accounts, excerpts from letters, and other contemporary sources in which the actors, great and small, speak for themselves. Baker intrudes only occasionally to set the scene. As the reader goes along, he comes to appreciate the great extent to which the horrible tragedy we call World War II was driven almost willfully by “statesmen” on both sides whose distinguishing qualities were viciousness, foolishness, vanity, overweening lust for power, utter irresponsibility, and recklessness. Some say that we get the leaders we deserve, but I refuse to believe that, on the average, we the people are nearly as evil as the “great men” who lead us.
Robert Higgs is Retired Senior Fellow in Political Economy at the Independent Institute, author or editor of over fourteen Independent books, and Founding Editor of Independent’s quarterly journal The Independent Review.
Beacon Posts by Robert Higgs | Full Biography and Publications
Aaron L. Friedberg American History Andrew Bacevich Books Bruce Caldwell Charlotte A. Twight Chris Hedges Chris Matthew Sciabarra Clausewitz Day of Deceit Dependent on D.C. Derek Leebaert Economics Europe F. A. Hayek Fascism FDR From Liberty to Democracy Human Smoke Imperialism In the Shadow of the Garrison State Japan Jörg Guido Hülsmann Ludwig von Mises Military Mises: The Last Knight of Liberalism Morality Murray Rothbard Nicholson Baker Politics Randall G. Holcombe Robert B. Stinnett Robert Higgs The Fifty-Year Wound The Illusion of Victory The New American Militarism The New Dealers’ War The State Thomas Fleming War War Is a Force that Gives Us Meaning
Comments
Before posting, please read our Comment Policy.
© 2023 INDEPENDENT INSTITUTE, 100 SWAN WAY, OAKLAND CA 94621-1428 | (510) 632-1366 | (510) 568-6040 FAX | SEND EMAIL