The U.S. government has once again smacked into the national debt ceiling. Technically, that means the U.S. government can’t borrow more than the $31.4 trillion previously approved by the U.S. Congress. But in practice, what it means is that the U.S. Treasury will start playing a shell game called “extraordinary measures” with the funds it controls. That game will continue until the U.S. Congress votes to reset the debt ceiling to a new level.

But like most things in Washington D.C., the latest debt ceiling debate isn’t really about the debt. It’s about who gets to choose how much the government will spend. Spending is the one thing that politicians and bureaucrats have complete control over, and it’s the one thing they care about most.

In a sane world, they would never spend more than they collect in tax revenues. But it’s not a sane world. They never want to spend less than they can, so they borrow the rest to make up the difference. That can work for a while, but thanks to President Biden’s inflation, the government has to spend more while its cost of borrowing has gone up. So, of course, that’s what President Biden wants to do.

The reality is continuing that rate of spending is no longer fiscally sustainable. Paying interest on the government’s borrowed money has become the fastest-growing part of federal government spending.

I put the following chart together to show how crazy President Biden’s spending plans are, showing how government spending, revenues, and the national debt will change from now through 2032. I’ve also shown how a plan to balance the budget by restraining the growth of spending over ten years would look like. 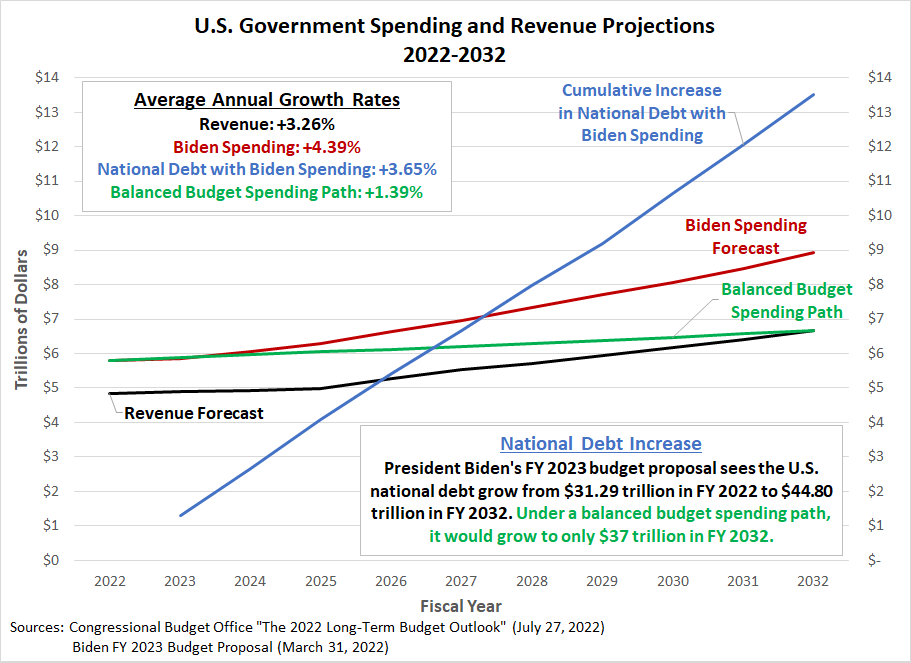 A Closer Look at the Next Two Years

Look closely at the balanced budget spending path for the years 2023 to 2025 and compare it with President Biden’s spending forecast. These are the only years he can count on being the U.S. President. There’s almost no difference for the 2023 and 2024 fiscal years, and the balanced budget spending path is just $250 billion smaller in FY 2025 than what he proposed to spend just last year.

It’s bizarre, then, to find President Biden refusing to negotiate with the new leadership in the U.S. Congress about accepting even modest spending reductions as the price for increasing the debt ceiling. It’s even stranger because President Biden brags about reducing the U.S

government’s budget deficit by $1 trillion in one year. Would President Biden force the U.S. government to default on its debts because he can’t abide by the thought of a spending cut two years from now? An amount that’s a quarter the size of how much he’s proud to have cut the deficit by just last year? For a budget that’s still bloated with coronavirus pandemic spending and other highly questionable line items?

If the new leadership in the House of Representatives was smart, they’d simply work out how high the debt ceiling would need to be to get to 2025 under the 10-year balanced budget spending path and vote on it. Then get down to business with putting together spending bills that follow that path. Then revisit the plan after Washington D.C. is entirely under new leadership in 2025.

Imagine that. A plan that involves claiming greater fiscal responsibility, minimal political sacrifices, and the chance to continue kicking the fiscal crisis can down the road. What politician in Washington D.C. could resist?