Let’s play a game. What do you think the fastest growing category of spending for the U.S. government will be over the next 30 years?

Here are your choices:

While most of these categories are self-explanatory, the Everything Else category includes all the budget items the U.S. Congress sets annually. It includes things like national defense, emergency pandemic spending, welfare, et cetera.

Are you ready for the answer? Here it is: 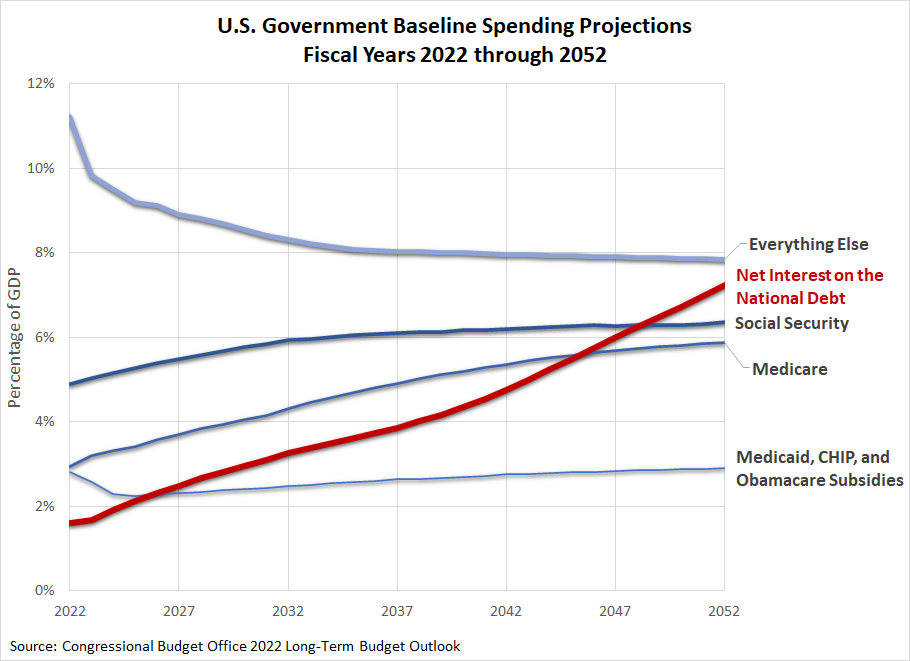 This data comes from the Congressional Budget Office’s 2022 Long Term Budget Outlook. The CBO identifies net interest on the national debt as what will be the fastest growing category of government spending for the next 30 years.

As you can see, Net Interest on the National Debt will grow larger than Medicaid, Child Health Insurance Program (CHIP), Obamacare Subsidies in 2026, Medicare in 2046, and Social Security in 2048. Assuming it continues growing as fast as the CBO shows, it will grow larger than all other government spending in 2054.

Net Interest on the National Debt

The CBO explains what will make net interest on the national debt grow so much faster than every other category:

The CBO projects that the average interest rate the U.S. government pays its creditors will rise because of inflation. Here’s how they see those interest rates changing from 2022 through 2052:

Inflation does a lot more than affect the amount of net interest the government must pay on the national debt. It also affects the revenue side of the U.S. government’s fiscal situation. I’ll have more to say about that soon!