It’s no secret that interest rates rose sharply in 2022. After sitting on its hands for more than a year, President Biden’s inflation forced the Federal Reserve into action. Its response was to hike interest rates; now, its interest rate hikes are biting into the economy.

The interest rates are also biting into the U.S. government’s budget. So much so the CBO projects interest payments on the national debt are on track to become the fastest-growing category of government spending.

But the CBO didn’t anticipate the Fed would be forced to raise rates as high and as fast as they have. The chart below from the U.S. Treasury’s fourth quarter presentation to the Treasury Borrowing Advisory Committee shows how much more costly they’ve become over the past year. 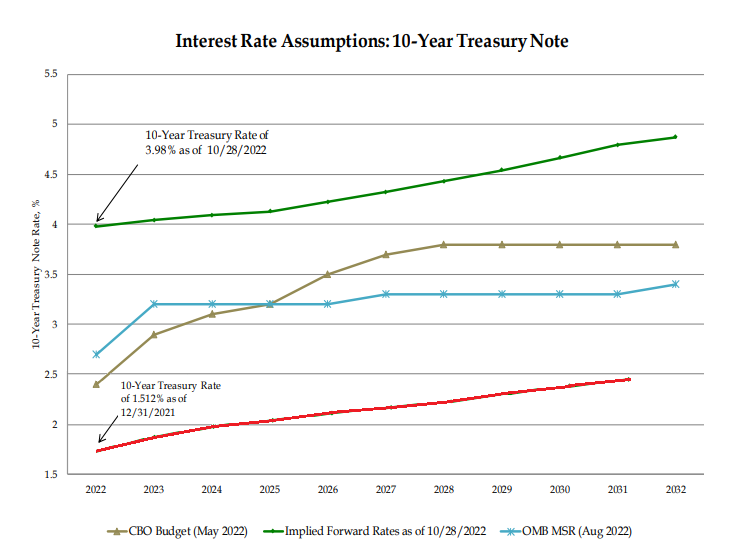 I’ve added the red data series to show the Treasury Department’s interest rate assumptions for 2022 through 2031 that they showed in their first quarter presentation. Both the Biden administration and the CBO have fallen behind the Fed’s rate hike curve.

What this means is the U.S. government’s debt servicing costs have skyrocketed faster than expected during 2022. Howard Wang of Convoy Investments provided some analysis on the subject back in November.

US debt servicing costs skyrocketed in Q3 as the rate shock propagated to the $31 trillion worth of federal debt, a number that continues to grow at a $1.5 trillion per year clip. Because of the high debt base, any small changes in average financing rate has a huge impact on ultimate debt costs to the government.

This number will only worsen as we continue to retire cheaper old debt and replace it with costlier new debt.

If the current ~4.5% average yield curve rate propagates to all $31 trillion worth of debt, we are looking at $1.4 trillion per year just in interest payments. This would be 29% of the 2022 FY total Federal tax receipt.

As a percent of GDP, the 2022 FY total Federal tax receipt was the third highest in U.S. history, so that’s saying something. With the U.S. economy headed toward recession in 2023 because of the Fed’s inflation-fighting rate hikes, how much longer will it be before the U.S. government has a fiscal policy reckoning?