Something’s Not Adding Up

2022 is almost over, which makes it an excellent time to take stock of the nation’s fiscal situation. In its 2022 fiscal year, the U.S. government:

The first two numbers come from the U.S. Treasury Department’s final report for the federal government’s 2022 fiscal year. The third number is what you get when you subtract the U.S. government’s total public debt outstanding of $30.93 trillion on September 30, 2022, from its recorded level of $28.43 trillion one year earlier.

As a percentage of GDP, 2022 represents the third-best tax take that Uncle Same has ever collected. Here’s a chart from the Tax Foundation that shows the U.S. government’s tax collections over the past 90 years: 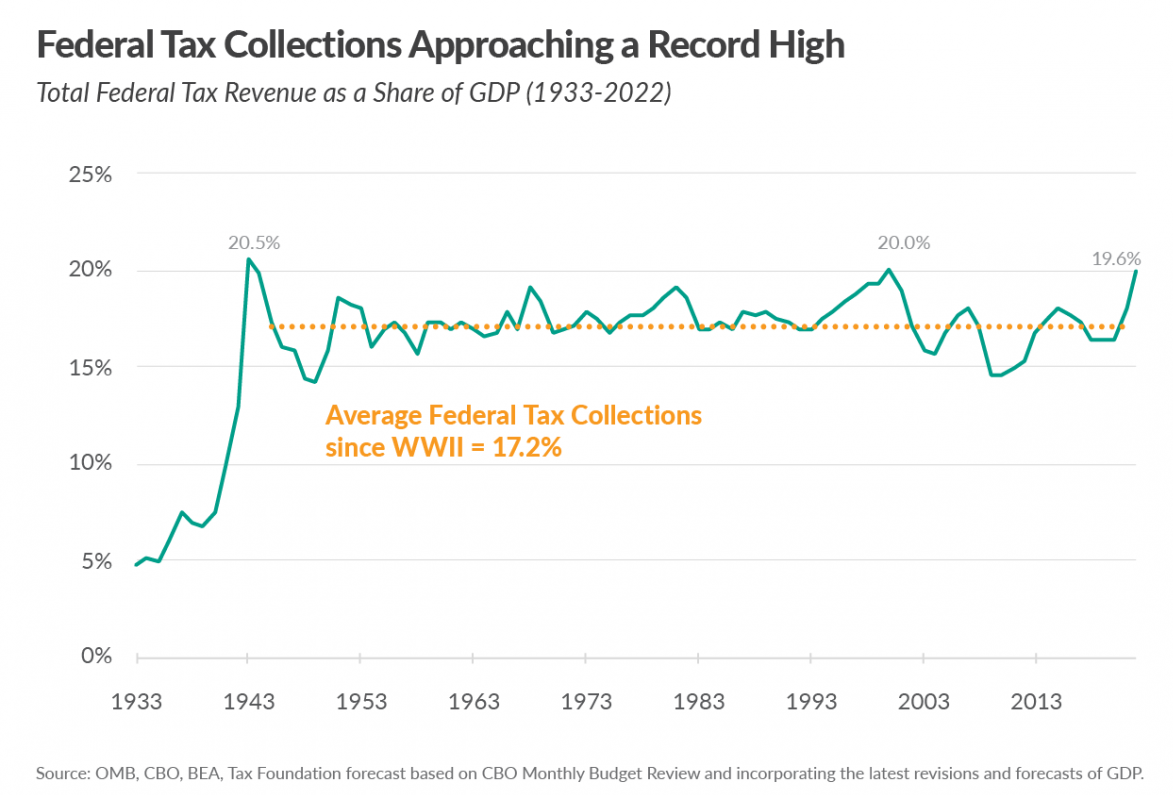 Here’s how the Tax Foundation’s William McBride describes how 2022’s third-highest-ever federal tax collections fit into history and was achieved (emphasis mine):

These are the kinds of tax revenues that should be producing a budget surplus. But they are not. McBride identifies the true reason why that’s the case:

Regarding spending in FY 2022, the CBO reports that despite the surge in tax collections, federal outlays far exceeded that amount. Total outlays were $6.3 trillion, resulting in a deficit of $1.4 trillion. Thus, spending was about 25.1 percent of GDP—a level only exceeded during the height of the pandemic in 2020 and 2021, and during World War II.

That leads to the question of what needs to change to fix that situation. McBride offers a prescription:

Record federal tax collections on top of surging prices—essentially an additional inflation tax paid by everyone who uses dollars—should not be used as a justification for more spending. Indeed, excessive spending in response to the pandemic is driving inflation, and rather than ramping up expensive relief programs (e.g., student loan forgiveness), we should be winding them down. Taxpayers should demand that pandemic emergency spending end now that the pandemic emergency is over, and that their tax dollars be used more judiciously or returned to them.

Much like how World War 2’s end meant it was time for the U.S. government’s war spending to end, the coronavirus pandemic’s end means spending to return to pre-pandemic levels. That would drop it to about 20% of GDP, the average since 1980.

Reducing excessive spending is the only viable path the federal government has to fix its fiscal health unless it risks entering into a fiscal doom loop. Failing to take that path would mark the failure of leadership at the highest levels in Washington, D.C.