The Competitive Enterprise Institute’s Clyde Wayne Crews measures and studies the impact of regulations issued by the U.S. federal government. Over the past year, Crews has had to become something of a detective because the numbers published in the Federal Register‘s online database weren’t adding up.

He found a problem in the database’s count of new rules issued by the Biden administration since it came into power. The problem is it is undercounting the Biden administration’s new rules by a large amount, making it appear they’ve issued fewer regulations than President Trump had. If true, since President Trump had made reducing burdensome and costly regulations a big deal during his presidency, that would be a rare success for President Biden.

But it’s not true. Instead of having something for over-regulated Americans to cheer, Crews indicates the Biden administration is obscuring the truth.

You’ve heard plenty from this quarter on broken disclosure and transparency in the Biden administration, which eliminated the “Deregulatory” designation for rules implanted by Trump and ditched Trump’s “rules for guidance” and the portals for disclosing guidance (but not before I tallied over 107,000 of them).

There are no indications we’ll be seeing the mandatory White House Report to Congress on the costs of regulations anytime soon, especially in the wake of a recent confirmation hearing for a regulatory oversight czar. I hope to be wrong on that.

In Washington D.C., when the truth isn’t easy to obtain, it is because politicians and bureaucrats have something to hide. They don’t want the information to become widely known. Because if it did, it would raise uncomfortable questions about their actions.

How Many New Federal Regulations Are There?

Initially, he said it appeared that Biden had issued fewer regulations. But as he dug deeper, Crews said a different picture emerged.

“Biden issued fewer rules than Trump did. That would seem counterintuitive, although not inexplicable; it takes time to issue new rules,” he wrote, adding, “Still, Biden’s ‘whole of government’ agenda would inevitably make one wonder where all the rules are. Well, it turns out they’re on the newer white-paper compilation charts. While the online database shows 3,257 rules, the document count in the newer roundup is actually 4,429, a 45.8% increase over Trump.”

Government regulations add to the cost of doing business. Because those costs get passed along to consumers, these rules directly contribute to the inflation that has come to define Joe Biden’s presidency. A 45.8% increase in the number of regulations issued by the federal government during Biden’s first year in office is a big number.

Crews tracked down a document the Federal Register uses to track its work, which indicates the number of new rules issued by year since 1976.

I made the following chart to show what it documents. The inset chart shows the average annual number of new rules issued by each president. 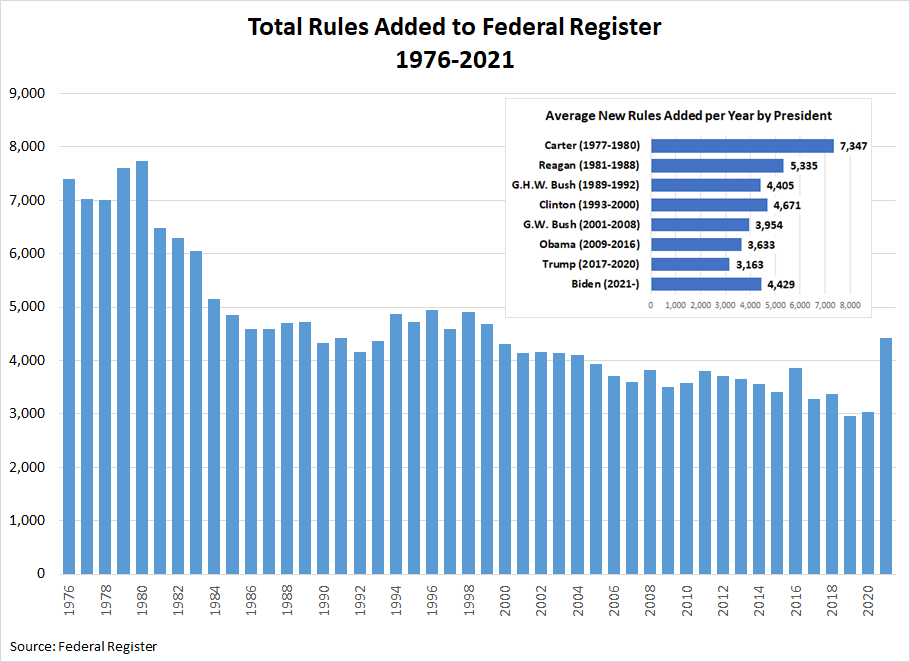 President Biden isn’t just reversing Donald Trump’s policies limiting the growth of new federal rules. He’s reversing 40 years of an improving trend to minimize the federal government’s regulatory burden on Americans. Most Americans would say that means the U.S. is heading in the wrong direction.

For President Biden, that’s a direction over which he has full control. What do you suppose he’ll direct his administration to do about how many rules they issue after the midterm elections?