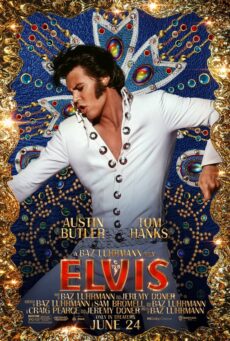 Luhrmann’s telling is historically faithful to the start, emergence, and decline of one of the most enduring icons of popular music. Featuring an outstanding performance by Austin Butler as Elvis Presley, the movie’s visuals are stunning. The editing is frenetic in places, but artful and reflective of the story’s tone. The imagery thoughtfully links critical themes, events, and emotionally transcendent moments in Elvis’s life.

Shaking Things Up Through a Villain’s Point of View

More controversially, Luhrman tells the Presley story using the point of view of Col. Tom Parker (Tom Hanks), the entertainer’s personal manager for more than two decades. In popular culture, and with more than a little justification, Parker is a villain in the Elvis story.

An illegal Dutch immigrant who never obtained American citizenship, Parker was first and foremost a promoter. He worked carnivals before establishing himself as a music promoter in the 1930s. Traveling throughout the Jim Crow South, he worked with leading country music acts. One of those acts would go on to become governor of Louisiana, who conferred on Parker the honorary rank of “colonel” in the state militia.

This background as a showman and promoter is critical to understanding the increasingly delusional perspective of Parker as he shepherds Elvis’s career through obfuscation, clever misrepresentation, cunning, and personal ambition.

Movie Stays Focused on the Rise of a Popular Icon

Yet, Luhrmann’s movie stays focused, never allowing Elvis to stray too far from the real-story of this culturally transformative performer. Audiences see Elvis’s triumphs as he incites young audiences, particularly young girls, as the tragedy of misplaced faith in people and unbalanced life choices. Nevertheless, clever dialogue and a masterful performance by Tom Hanks ensures that audiences see an authentic Elvis despite the increasingly jaundiced eyes of the Colonel.

The discovery and rise of Elvis Presley is one of those historical moments where the unchecked pursuit of personal profit, at first, yields to broad social benefit. Rhythm and Blues was a niche genre, and rock music was nascent. Presley changed the course of popular music.

Luhrmann refreshingly grounds Elvis’s story in African American rhythm and blues (R & B) and Gospel. These were the sounds that inspired Elvis. While he had little formal training and could not read music, he had good instincts. Elvis started out in Tupelo, Mississippi. By the time he was a teenager, however, he was in Memphis. He frequented the famous Beale Street, the now famous home to the city’s blues artists and performers.

Elvis’s counter-cultural, high-energy performances made him a perfect vehicle for introducing larger white audiences to black R&B. It also drew the ire of cultural conservatives and white supremacists, particularly, but not exclusively, in the South.

The movie credits Parker with seeing a broader vision, and the subsequent profits, by launching his act nationally. This popularity put Elvis and Parker in the cross hairs of cultural conservatives and white supremacists. Much of the protest focused on Presley’s provocative use of his hips and other “gyrations” that incited young audiences.

Lurhmann’s script does a nice job of using these contrasting ambitions to create the tension that moves the story forward. One particularly noteworthy example almost derailed his career. As Elvis gained national audiences, he was invited to appear on major prime time TV entertainment shows. His breakthrough was with Milton Bearle, but would soon include Ed Sullivan and others.

Comedian Steve Allen infamously refused to book Elvis unless he dressed and performed more conservatively. He dressed in a black suit with tails and sang a slower, melodic version of what would become an iconic rockabilly version of Hound Dog to a basset hound.

Using the perspective of Col. Tom Parker as a foil to Elvis’s personal and professional ambition is a bold and creative choice.

Did Elvis’s Performance Ambitions Lead to his Fall?

The tension between Parker’s need to earn money to support his gambling habit and Elvis’s performance ambitions keeps tension throughout the movie. As Elvis becomes more popular, Parker thwarts efforts to send him on an international tour (for reasons he fails to reveal to Elvis). Yet, Elvis is not let off the hook for ultimately bowing to Parker’s persuasive arguments to continue performing in the U.S.

Who bears responsibility for Elvis’ fall? Through the film, Elvis struggles with his desire to entertain and taking on adult responsibilities to manage his career. Parker certainly didn’t do Elvis any favors. But poor judgment on Presley’s part contributed to tragic effect.

Mix of Ambition and Greed Lead to Tragic End

Audiences leave the movie Elvis seeing Parker as a villain. But he is a mixed bag of heart, greed, and narcissism. In part, this is because Parker is strikingly honest (in his narration) even as he is deluding himself about his positive influence on Elvis’s personal life and career.

Overall, Baz Lurhman’s Elvis provides an artful telling of the start, rise, and tragic fall of the King of Rock and Rock. Elvis is a well crafted, visceral movie that serves as a cautionary tale of conflicting interests. It is also a cautionary story about how the unchecked combination of greed and ambition can lead to tragic consequences.