Black Widow may be the movie that brings audiences back into the theaters. While released simultaneously on Disney Plus, the movie’s action and immersive visuals simply will not translate as well or as viscerally on a small screen. Yet well-conceived themes combined with adept direction will also satisfy those unwilling (or unable) to make the trek to the local movie theater.

Black Widow’s plot, however, perhaps inevitably, is a bit tedious. Set in the immediate aftermath of Captain America: Civil War (2016), former assassin Natasha Romanov (Johansson) is on the run. She is unfocused on what to do now that her fellow Avengers have either been killed or jailed. 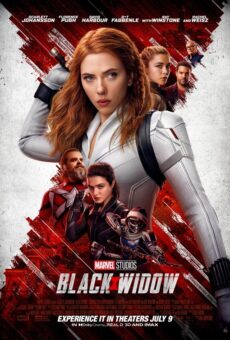 When she runs across a set of vials sent to her from a Budapest safe house, she realizes that something much bigger than her own rogue Avenger status is afoot. She investigates the source, encountering her surrogate younger sister, Yelena Belova (Pugh). Yelena is also a Black Widow and has gone rogue.

Yelena broke the spell of the Red Room, the elite training facility now run by the diabolical and sociopathic General Dreykov (Ray Winstone, Point Break, Cats, Hugo). She still harbors from Romanov’s abandonment of her during her days as a young trainee and surrogate big sister while living as a family in a sleeper cell in Cleveland. Yelena does not fully trust Natasha. But working together is their only real option as long as the Red Room exists.

Nathasha and Yelena resolve to destroy the Red Room. But to accomplish their task, they need the help of their surrogate parents, Alexei Shastakov (Harbour), aka the Red Guardian, and Black Widow Melina Vostokoff (Weisz).

The trademark Marvel action scenes keep audiences engaged. Yet the necessarily over-the-top special effects don’t overwhelm the more important story of two siblings finding their way back to each other after a lifetime of distrust, violence, and suspicion. The strong on-screen chemistry and banter between Johansson and Pugh helps. Each makes the character their own while making their bonding endearing.

Black Widow transcends the movie’s action as a surprisingly sober and poignant story of familial loyalty, trust, and intimacy. These more subtle and nuanced moments are the ones most likely to give the movie an enduring audience on streaming platforms. These themes were also central in Captain America: Civil War. Black Widow deepens and explores the intimacy of these connections more fully. This layer may well be at least partially attributed to the sensibilities of bringing a talented “small film” female director to helm this blockbuster (as well as Johansson’s role as star and an executive producer).

Black Widow definitely nods toward what many might consider “woke” themes. But they fit within the context of the on-screen story and backstory of the Red Room. Sexual assault, exploitation, and harassment are real issues with global implications. An undercover assassin program that recruits from marginalized and “discarded” young girls around the globe is as plausible as any other superhero backstory.

More importantly, the Black Widow program predates by decades the current #MeToo movement. While Dreykov’s character is an over-the-top megalomaniac, this is the nature of comic book villains. His twisted, misogynistic world view fits well into the design and implementation of the Red Room program.

Overall, Black Widow, despite being the 24th movie in the Marvel Universe, is a welcome addition to the superhero movie genre. It’s well worth watching in movie theaters to appreciate the larger than life effects and action sequences. But the movie will likely hold up well on smaller screens because of the strength of the story, acting, and directing.