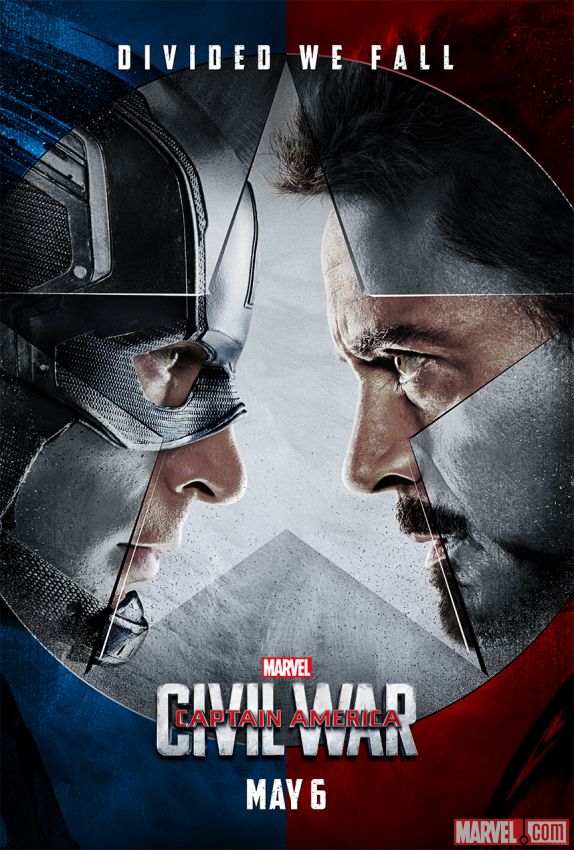 Captain America: Civil War blasted into U.S. theaters generating $192 million in its first weekend and more than $700 million worldwide. I’ll confess: I almost passed this one up: All I could envision were lots of explosions and major cities crumbling. I had my fill of that with the destruction of the fictional Sokovia in the predecessor film Avengers: Age of Ultron.

But Civil War, while a sequel to Age of Ultron, is in fact a very different film, and I’m glad I didn’t pass it up. Mainstream reviewers have emphasized the familial conflict between the Avengers as the core theme. But the glue that holds the entire plot together is a question of political philosophy that is crucial for liberty-minded viewers: Where do you draw the line when the State asks you to submit to its will?

True enough, much of the movie plays out as a test of loyalty between two literal brothers in arms: Ironman (aka Tony Stark) and Captain America (aka Steve Rogers). Both Robert Downey, Jr. (Ironman) and Chris Evans (Capt. America) give audiences top-notch performances—something easy to miss because their work is so consistently good—and the movie has great special effects although they never overwhelm the story or plot. One of the downsides to Civil War is the dizzying array of action heroes that end up on screen. This was inevitable, a necessary concession to the story, because a “civil war” between two people is an alley fight, not a challenge to civilization’s survival. Most of these heroes serve very transparent roles: They are in the film to take sides and fight. But others, such as a very youthful Spider-Man, become story pivots.

The subtitle “Civil War” is apt because the story’s conflict plays out on many levels, including the familial and political. The film starts out with a mission upended because of poor intelligence in Nigeria. Civilians are killed in what is perceived as recklessness on the part of the Scarlet Witch. Global outrage at the death of innocents sets in motion a political move to rein in the superheroes. A negotiated agreement, the Sokovia Accords, is forged among 117 nations that would put the United Nations (UN) in charge, specifying the time, place, and purpose for enlisting superheroes when the global governments decides they are needed. (The agreement raises another set of policy issues concerning national sovereignty, and these have been explored over at the Heritage Foundation by Daniel Woltornist.)

The agreement to submit to UN protocols creates a fissure between the super heroes. One side—the pro-UN, pro-regulation faction—is represented by the more technically and scientifically oriented Avengers, namely Tony Stark. Stark doesn’t trust his own judgement in the wake of the hubris that gave rise to Ultron through his experiments in artificial intelligence, and the destruction of Sokovia. On the other side is Steve Rogers, an old-fashioned hero who is guided by a strong internal moral compass. Rogers opposes the agreement because he doesn’t believe they should be restrained from intervening when injustices occur. He doesn’t ignore the harm created by mistakes, but Rogers believes superheroes are responsible for their decisions, and the consequences of those decisions, and doesn’t believe they should compromise on a first principle of intervening to prevent injustice. Rogers’ conviction is deeply rooted in a moral conviction to right wrongs and restore justice.

Stark, in contrast, is more practical and technical. He doesn’t trust himself or the others, and believes oversight is necessary. Objective third parties are better positioned to provide oversight and determine when the superheroes should be engaged. Stark’s position is also a political calculation. Given the loss of civilian life in several interventions, Stark consistently couches his plea for accepting UN regulation in the argument that they are forestalling something even worse, perhaps a complete disbanding of the Avengers or prohibition on using superhero powers.

This conflict—personal responsibility versus scientific third-party management—is the one that I found most intriguing. It’s also the one that plays out throughout the entire movie: What authority does a government or world power have to regulate the livelihood of individuals? Or, from Rogers’ point of view: What moral responsibility does the individual have to stand up against oppression and injustice in the face of government-sanctioned prohibitions? Stark sides with progressives who believe the State and political rationalism provide the right balance and calculus for deciding how our labor is used. Rogers sides with the individual over the State.

I think it’s hard to underestimate the importance of this particular theme in the movie (which would make for great classroom discussions). Of course, Rogers is embodying Enlightenment principles and the political economy of John Locke (and others), articulated in the second sentence of the U.S. Declaration of Independence: “We hold these truths to be self evident, that all men are created equal, that they are endowed by their Creator with certain unalienable Rights, that among these are Life, Liberty, and the pursuit of Happiness.” Men (and women) are masters of themselves, and governments are instituted by men, among men, to protect personal rights and liberties which exist by the objective truth of their humanity. This is the point of the first sentence of the Declaration, which asserts that the people can choose to dissolve their government (“the political bands which connected them with another”) and then re-institute a government to protect their rights.

Moreover, these ideas are actually much older than John Locke and the Enlightenment philosophers. In Western thought, a significant step toward the authority of the individual to choose their own course outside the scope of human law may have occurred with the widespread acceptance of Christianity and the humanism embedded in its theology. Paul’s letter to Christ Jesus’s followers in Phillipi, a Roman colony at the time (about 60 CE), challenges them to follow the path of a faith rooted in love, peace, and humility, not the human laws of empire and conquest instituted by the Roman emperor. Indeed, Paul writes (Philippians, 3:9), “I no longer count on my own righteousness through obeying the law; rather, I become righteous through faith in Christ.”

This is a qualitatively different admonition than in Matthew 22:21, where Jesus says “Render to Ceasar the things that are Caesar’s; and to God the things that are God’s,” a passage many have interpreted to support separation of Church and State, and the notion that faith can coexist in parallel with government. Paul’s letter to the Philippians, in contrast, emphasizes that followers are beholden to a higher purpose, a deeper faith to principle that is morally greater than earthly commands or laws. Steve Rogers’ path is in this tradition of individual conscience superceding human law, which dates back at least 2000 years in Western thought and is embodied in the governing principles of the American republic.

So, I left the movie theater with a very different impression of the core story (and character arcs) than I expected. If Age of Ultron included a popular meditation on family and civil society, Captain America: Civil War explores courage and the faith in oneself and in principle that is necessary to exercise it. Captain America’s story arc appears to be a long one over principle, at least as it is explored in the films. I now view Civil War as an epic battle about moral principle and political economy, instead of sibling rivalry amidst lots of special effects. Civil War might be the blockbuster most suited for this political season, depending on which presidential nominees make it to the general election in November. My guess is most libertarians will side with Rogers.