President Biden released his first budget proposal on Friday, May 28, 2021. Just ahead of the Memorial Day Holiday weekend.

In the case of President Biden’s first budget, they must think it’s awful. Since it was already months behind schedule, there was no real urgency to release it now. After all, what difference would it make if they waited until the next Tuesday? But they made sure they released it on the Friday before a three-day holiday weekend.

How bad is it?

In terms of spending, it is perhaps one of the worst budgets ever proposed during peacetime. The Biden-Harris administration is proposing to permanently increase the U.S. government’s spending per capita by a very large margin. The chart below shows how much when compared with Uncle Sam’s spending during the last 100 years. 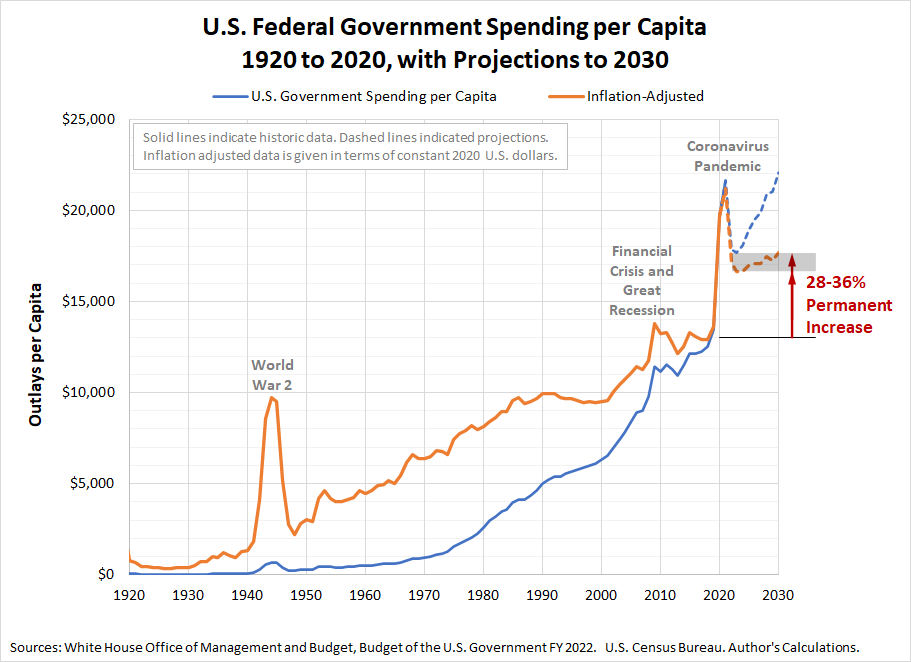 Before the 2020 Coronavirus Pandemic, the U.S. government averaged spending an inflation-adjusted amount of about $13,000 per American per year. The Biden-Harris administration proposes to permanently increase that by 28% to 36% even after emergency pandemic spending ends, from a low of $16,607 in 2023 up to a high of $17,707 in 2030. All these figures are expressed in terms of constant 2020 U.S. dollars.

Covering the cost of all this additional spending can only be done in two ways, by raising taxes and borrowing. The Biden-Harris budget proposes to use both of these methods. But that’s a different story for a different day.

For now, just consider how long you could sustain spending 28% to 36% more than you do today before you would run into serious financial trouble.