How Did Forecasters Get the Pandemic Economy So Wrong?

The stock market and the consensus of forecasters are two sources of economic intelligence that are often enough at odds. But history hardly ever saw a gulf as wide as what occurred in this year of pandemic. Just before the general shutdown began in March, the market’s plunge corroborated the influx of popular fear and pessimism. Then economic views quickly diverged. As the market clawed back its lost ground the gap became dramatic.

Some opinion leaders at first disparaged the stock market as an irrelevant source of information that was out of touch with reality. But the convenient invention of a “disconnect” between the market and the economy turned out to be a fallacy. With evidence pouring in to substantiate the message from the market, the consensus began a long series of re-estimates. According to the Wall Street Journal’s monthly Economic Survey, the average Q3 forecast reached an annual rate of 28.5 percent as of October, compared with 1.2 percent back in March as the shutdown was about to begin. Cumulatively, it was an enormous shift—from implying no recovery at all to recognizing far the most vigorous quarterly GDP increase since records begin.

Even now, with a substantial fraction of the facts already in, the gap has yet to close. The chart shows the path of real GDP growth since mid-2017, as published by the Bureau of Economic Analysis (BEA) in Washington. 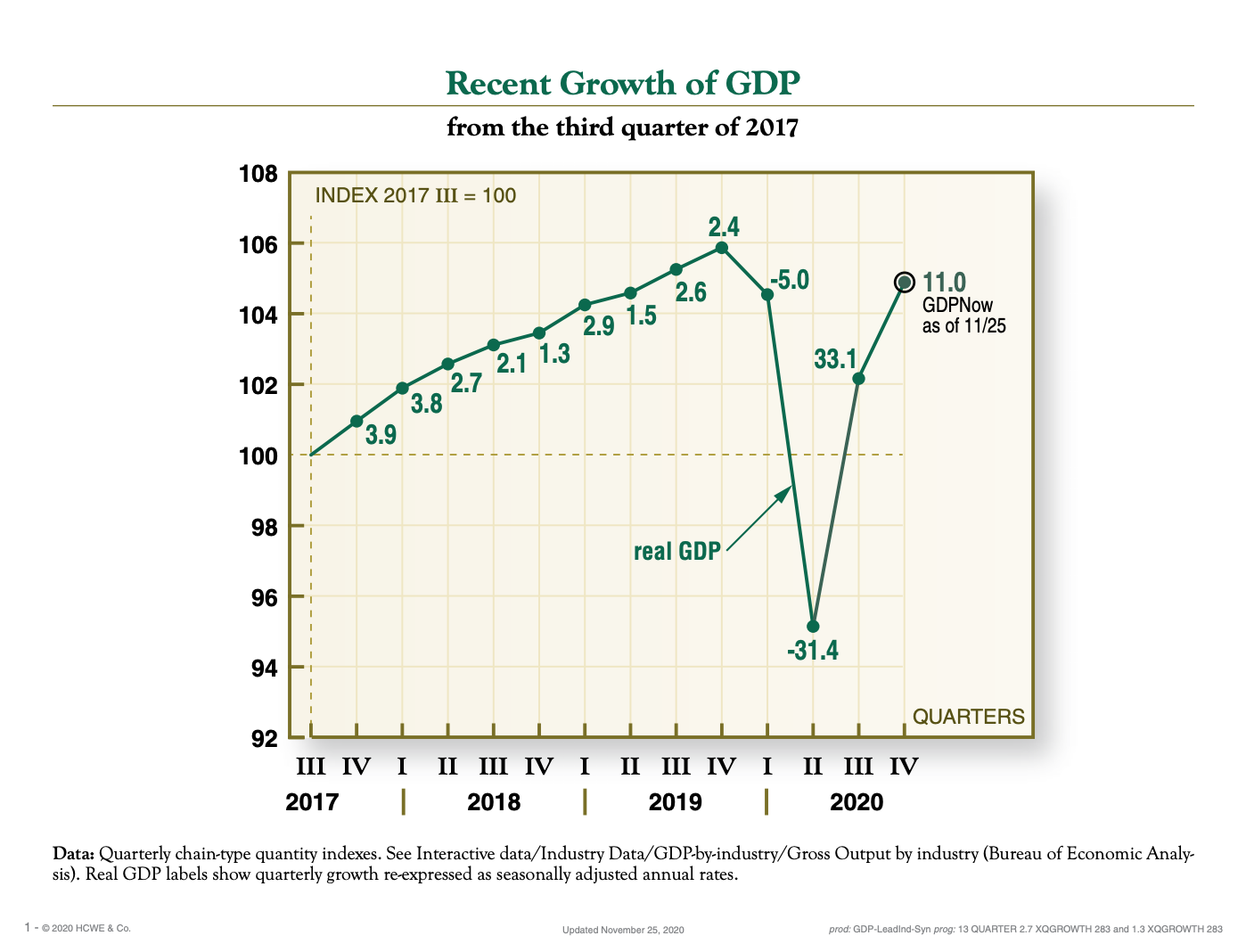 Perversely, the magnitude of the opinion shift has been barely mentioned by the news media, and it remains ill recognized by the public. Although there’s nothing unusual about good news receiving less press attention than bad news, this extreme example was fueled by one an extremely inaccurate diagnosis on the part of consensus opinion.

The most objective starting point for a forecast is to consult the most timely hard data available. On that front, we now have a powerful input, known as GDPNow, that was unavailable in previous recessions: a flow of running estimates of current-quarter GDP growth from the Atlanta Fed. Its methodology for processing real-time raw and incomplete data is similar to the BEA’s. Forecasters could have caught up with reality much more quickly if they had paid this source the attention it deserves. As these “nowcasts” get better known they will be a vital source of previously under-utilized information about the evolving economy.

There are other reasons why the 2020 forecasting debacle did not need to happen. The earliest sign that forecasts were too pessimistic came from the stock market, but it was disbelieved. Now, with hindsight, it has become clear that the stock market signal was far more accurate than the consensus.

Another clue that something might be wrong is unwarranted persistence. When a forecaster is obliged to adjust an estimate in the same direction many times in a row, it’s a sign of resistance or denial. If adjustments have been too small, the forecaster’s beliefs are overriding objective information. Indeed, forecasts cannot be “efficient” if errors are not random.

Contributing causes of unjustified pessimism lie in economic myth and false assumptions. The economy is portrayed to us as akin to a house of cards, easily knocked over by a single setback, and in need of a powerful central authority to rebuild. Too many economists emphasize vulnerability and forget about resilience. To the contrary, economies behave like living systems that adapt to setbacks by changing shape. They adjust to constraints by adopting a path that is feasible instead of the one that would otherwise have been chosen. As the classical economists recognized centuries ago, the course of the economy is not directed from a controlling point such as King George III or the Federal Reserve. Then as now it is guided by a dispersed price system of free and competitive markets.

A related mistake shows up in the popular idea of a “90 Percent Economy.” Back in May, The Economist calculated that avoiding person-to-person proximity of the length of an arm or less would “render unviable” occupations worth approximately 10 percent of national output, and concluded that the resulting economy would be, “by definition,” 10 percent smaller than that which came before. Actually, this is very far from a matter of definition. A free-market economic system substitutes what is viable for what is not, and thereby changes its shape without any necessary reduction in size.

The coronavirus crisis turned out to be a self-inflicted consequence of mandatory shutdowns. Once shutdowns were lifted there was no excuse for professional opinion to underestimate the US economic rebound to such a massive extent. The error could have been avoided through simple changes of mindset and procedure.