In retrospect, perhaps one of the more remarkable aspects of the classic movie The Dawn Patrol is the year it was released: 1938. The bloody carnage of World War I, the setting for the movie, was less than a generation away. Yet, a depression-ravaged Europe was again preparing for war. This time, rather than pointless alliances, they faced the existential threat of Fascism.

Europe on the Precipice

At the time, most Europeans knew they were on the precipice of another potentially epic human tragedy as they entered the movie theaters. Just two months before the film’s release, in September, Hitler had secured the annexation of the Sudetenland in western Czechoslovakia as part of the notorious Munich Agreement. It was Western Europe’s last grasp at 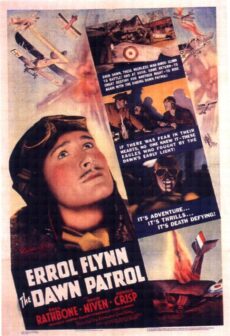 While UK Prime Minister Neville Chamberlain claimed the agreement was “peace for our time,” others believed it was simply forestalling the inevitable. In fact, the agreement just gave Hitler more time. It set the stage for Germany’s invasion of Poland and the further partitioning of central Europe. It also helped lay the foundation for Winston’s Churchill’s elevation to Prime Minister.

The 1938 version of The Dawn Patrol is in fact a remake of a 1930 film (later renamed The Flight Commander). At the time, the movie was noted for its realistic (for the technology of the times) dog-fighting scenes which were directed by World War I flight trainer and movie director Howard Hawks. While the visual effects are clunky, and the back drops will feel amateurish to modern audiences, the set-based production gives the actors—among the best in Hollywood’s Golden Age—greater room to act. The in-flight scenes are surprisingly more intimate and engaging for audiences than in later World War I movies featuring air-to-air combat, such as The Blue Max (1966) or The Red Baron (2008).

But The Dawn Patrol’s themes keep the movie fresh for today’s audiences. The center of the film’s plot is the squadron commander, Captain Courtney (Errol Flynn, Captain Blood, Adventures of Robin Hood, The Charge of the Light Brigade), who is forced to send up inexperienced pilots on dangerous and nearly suicidal missions. We see the psychological toll that wears these commanders down in ruthless succession.

First we witness Major Brand (Basil Rathbone, Adventures of Robin Hood, Captain Blood, Sherlock Holmes in 1940s films) near emotional breakdown as he argues with the “brass heads.” Then we see Courtney transition from lead pilot to squadron commander when Brand is transferred. Finally, and most poignantly, we see the terrifyingly poignant transformation of the go-lucky Lieutenant Scott (David Niven, Around the World in 80 Days, Blake Edwards Pink Panther films) when he inherits successive commands from Courtney. (Another lengthy examination of the effects of combat command on the mental health of officers can be found in Robert Matzen’s exceptional biography Mission: Jimmy Stewart and the Fight for Europe. Jimmy Stewart commanded a bomber air wing and flew nearly 30 combat missions in World War II.)

Much of The Dawn Patrol’s action focuses on the camaraderie of the combat fliers as they deal with personal loss, the stress of combat, and the inevitability of death. The average life expectancy of a pilot in World War I was weeks, not months. Experienced pilots were more likely to survive than newer ones, an effect emphasized throughout the film with the steady string of replacements brought in when the previous crop is shot out of the sky.

While the experienced pilots deflect the trauma of war through drinking, denial, and compartmentalization of the terror, the movie brings the tragic human cost home to audiences over and over again. When Lieutenant Scott’s younger brother joins his squadron, the emotion and toll begins to tear the tight-knit squadron a part. Scott’s brother is sent up the next morning (with the other replacements) with just nine hours of flight training.

Spotlight on the Trauma of War

The Dawn Patrol does not spare audiences from the horrors of war, the burdens placed on those who participated, and the human effects that we now recognize as Post-Traumatic Stress Disorder (PTSD). The contrast between the relative physical luxury of the military’s rock stars and the emotional trauma of personal combat in the air draws out the movie’s main themes. The dialogue is snappy and relevant.

Overall, The Dawn Patrol holds up remarkably well 82 years after its Hollywood release.