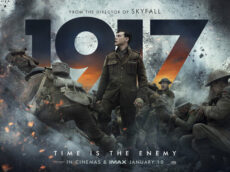 1917 has become a front runner in the race for Best Picture at the Academy Awards. Indeed, the epic movie featuring the brutal trench warfare of World War I is grand in scope and should be experienced, not just watched. Few films are as clearly and convincingly made for the big screens of movie theaters as this one directed by Sam Mendes (Road to Perdition, Skyfall, Spectre).

Roger Deakins (Skyfall, Sicario, Blade Runner 2049), director of cinematography, chose to shoot 1917 is one continuous take, as if one camera tracks the lead characters through the entire arc of the film. The technique effectively immerses viewers into gut-wrenching conditions of warfare on the front lines of the “Great War.” The trenches were a meat grinder, and the sweeping shifts in the camera capture all its carnage, fear, and shocking inhumanity of the one of the costliest, and least effective, wars in history.

In the story, the Germans have pulled back, abandoning their trenches. Colonel Mackenzie (Benedict Cumberbatch, Doctor Strange, The Imitation Game, Avengers) believes the Germans are in full retreat. He plans an attack the next morning to route the Germans. The British central command, however, has received aerial photos showing that the Germans are simply regrouping behind their mainline, hoping to lure the British into an attack and then ambush them with overwhelming force. It’s up to British army corporals Tom Blake (Dean-Charles Chapman, Game of Thrones, Into the Badlands) and Will Schofield (George MacKay, Captain Fantastic, Ophelia) to get a message to Mackenzie in time to call off the attack. As an incentive, Mackenzie tells Blake that his brother Joseph (Richard Madden, Game of Thrones, Rocketman), a lieutenant, is likely to be in the first wave and killed if the attack is launched. Blake becomes locked into the mission over the skepticism of the war-weary Schofield.

The plot in 1917 doesn’t get much more complex than this, so it’s up to the skill of Mendes and Deakins to keep the forward momentum. The immersive effects of the single-shot technique, which never breaks from the motion and dialogue between Blake and Schofield, effectively keeps audiences engaged, never quite sure of what will happen next. The result is a striking display of cinematographic excellence, and worth seeing on the biggest screen possible (e.g., Dolby Cinema or IMAX). This artistry may well lift the movie, Mendes, and Deakins to the top spots during the Academy Awards. It also may make 1917 one of the most compelling antiwar films of the past decade.

1917 has already won the Golden Globe for Best Motion Picture—Drama and Best Director and has ten nominations leading into this year’s Oscars.