Just Mercy is the type of drama that infuriates its audience.

Based on a true story, the plot focuses on the case of Walter MacMillian (Jamie Foxx, Django Unchained, Baby Driver), an African American man unjustly accused and convicted of murder in mid-1980s Alabama. MacMillian spent six years on death row before criminal defense attorney Bryan Stephenson (Michael B. Jordan, Fruitville Station, Creed, Black Panther) was able to force a re-trial over the objections of the local sheriff, prosecutor, and judge.

The details of the case are astounding in their own right. MacMillian was convicted in 1988 of murdering an 18-year old white woman, based on the coerced testimony of a lone witness. Local law enforcement did not interview witnesses that could have corroborated MacMillian. He was convicted by an all-white jury in a local trial despite the highly polarizing and racially charged atmosphere of the case.

Just Mercy doesn’t need to sensationalize the story, because the reality was already a dramatic affront to common-sense justice. And this injustice makes the movie all the more compelling.

Director and co-writer Destin Daniel Cretton keeps the plot moving forward with tension that surrounds Stephenson’s attempt to secure justice for MacMillian. The drama hinges on how the local small-town Alabama community reacts to the investigation and the hoops Stephenson jumps through. Little mystery surrounds whether MacMillian is guilty. The resistance to the obvious injustice becomes the source of the conflict, with audiences engaged with bewilderment that a legal travesty such as MacMillian’s conviction happened anywhere in the United States after the 1960s. 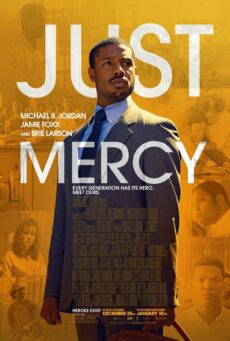 Jamie Foxx’s performance as MacMillian is outstanding. His portrayal of the unjustly accused MacMillian is captivating. (He earned a nomination for best supporting actor in the 26th annual Screen Actors Guild awards.) Each interaction, inside the prison and out, draws audiences into his plight—incredulity, hopelessness, cynicism, futility—not even allowing himself to believe he will be taken off death row despite countervailing evidence.

Also helping the movie along is a top-flight performance by Michael B. Jordan. The character and screenplay give him an opportunity to show depth and range as an actor, as Stephenson evolves from a naive Harvard-law educated lawyer to a gritty civil rights lawyer facing down racism. Brie Larsen is also given a chance to stretch her acting chops as the Equal Justice Initiative’s Director of Operations and a white ally of Stephenson.

Just Mercy, however, is more than a story of an individual case. The movie balances the case of MacMillian with other inmates sentenced on death row. The story and plot dive deep into two powerful forces that can perpetuate injustice without the proper checks. The first is racism, which starts from the presumption of guilt for blacks and minorities.

The second force is procedural inertia that is resistant to reversing wrongly decided cases even when new exculpatory evidence is presented. Both dark forces are real, and the human consequences are well told. Thus, the movie’s message is universal. It also serves as a warning for those willing to believe that legal protocols and proceedings will result in a just outcome on face value.

Currently, twenty-eight states allow the death penalty and more than 2,600 men and women sit on death row. More than 40 percent of those awaiting execution are minorities. One hundred and sixty-six men have been exonerated since the death penalty was legalized by the U.S. Supreme Court in 1976. Just Mercy makes a compelling case that the human costs and injustice of having just one person on death row may be incalculable.

Just Mercy, released late in 2019 and in wide-release in January 2020, is available on DVD and streaming via Amazon Prime.