A Growing Mountain of Debt

What will be the longest lasting legacy of 2020’s coronavirus pandemic?

The Wall Street Journal’s Jon Hilsenrath has summarized it in just three words: Mountains of Debt.

The full impact of the coronavirus pandemic may take years to play out. But one outcome is already clear: Government, businesses and some households will be loaded with mountains of additional debt.

Perhaps the quickest, easiest way to see how much additional debt the federal government, businesses, and households are now accumulating is to look at the changing balance sheet of the U.S. Federal Reserve, which has virtually become over the past month the only creditor to each of these groups. The chart below shows how much the federal government, foreign central banks, and U.S.-based financial institutions and businesses have borrowed from the Fed. 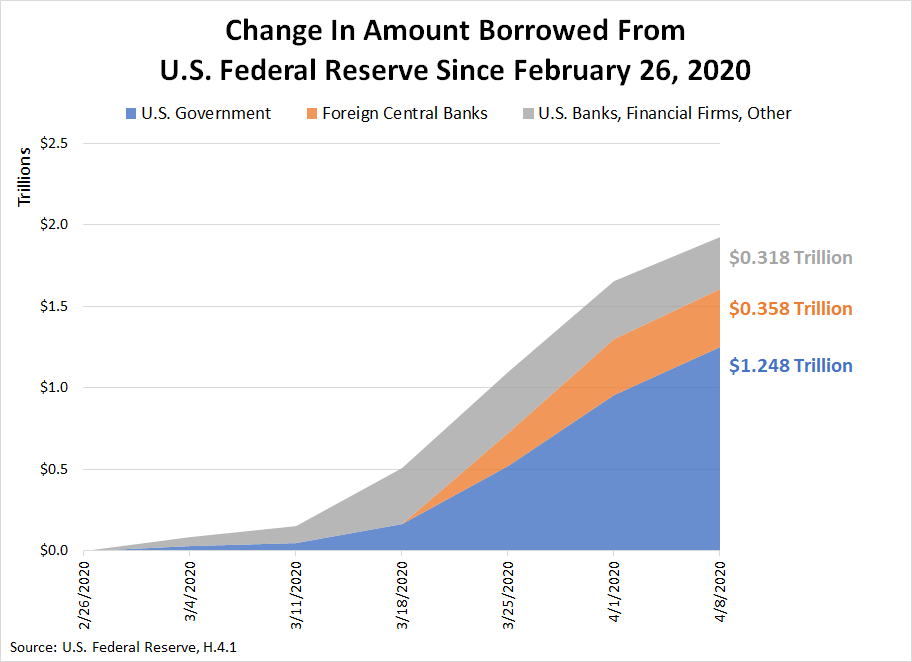 That may be the fastest rate at which the U.S. government has borrowed money in its history.

The scariest part is that the chart shows only half of the additional federal borrowing that Congress has already authorized for coronavirus relief. And all this is on top of the $1 trillion deficit the U.S. government was already on course to run in a world free of the coronavirus pandemic.

Hilsenrath explains why today’s rapid and large increase in debt is certain to become a burden on Americans for a very, very long time:

The debt surge is set to shape how governments and the private sector function long after the virus is tamed. Among other things, it could be a weight on the expansion that follows.

Many economists believe low interest rates will help the nation manage the soaring debt load. At the same time, they say high levels of private sector debt could lead to a period of thrift, slowing the recovery if businesses and individuals try to rebuild their savings by holding back on investment and spending.

“People and firms and government are facing a negative shock, and the classic textbook prescription for a temporary shock is to do some borrowing to smooth that out,” says Alan Taylor, an economist and historian at the University of California Davis, who has studied the economic effects of pandemics going back to the Black Death of the 14th century.

Borrowing now amounts to a transfer of economic activity from the future to the present. The payback comes later. “You do have something to worry about in terms of the recovery path,” Mr. Taylor Said.

Today’s debt situation results largely from the steps that state and local governments have taken to try to mitigate the effect of the coronavirus epidemic from spreading in their jurisdictions, many of which have involved ordering the closure of businesses and for residents to stay at home. For many Americans, many of whom live in regions that are far from the areas where the coronavirus’ spread has been most concentrated, the knee-jerk reactions and overly broad restrictions that state and local government officials have imposed are what has put their livelihoods at risk.

For these Americans, it is very rational to want to protect themselves from the impact of government officials abusing their power by repeating the severe actions they have taken in the current crisis. The worse thing they can have is their own personal mountain of debt, so for them, building their savings is the insurance they can count on. Being free of debt means being able to better weather similar crises in the future.

If it weren’t for their existing mountains of debt, businesses now at high risk of bankruptcy, such as airlines, could much more easily afford to shut down a significant portion of their operations for an extended period of time, without any need for a federal bailout.

If it weren’t for its existing mountain of liabilities, the U.S. Postal Service wouldn’t be at such risk of going broke and the quasi-government operation wouldn’t be requesting yet another multi-billion federal bailout.

And if the U.S. government hadn’t already borrowed $23 trillion, much of which was done to fund previous bailouts and other poorly considered schemes, ordinary Americans wouldn’t now be at such risk of having their taxes rise and their freedoms diminished because of the additional burden of the government’s new debt and the desire of too many state and local government officials to fully exercise their powers without restraint.

Had more state and local government officials been more consciously restrained in their actions, matching them to the known spread of coronavirus infections within their jurisdictions, the cost of the coronavirus pandemic for ordinary Americans could have been much less.

Alas, that’s not an objective that many of America’s current politicians and bureaucrats have sought to achieve.