Bombshell Bombs With Too Much Hollywood, Too Little Real Life

Bombshell, the narrative film chronicling sexual harassment at Fox News, appears to be a dud at the box office. After three weeks in theaters, it still hasn’t generated enough revenue to cover its production budget, a leading indicator of commercial failure. Yet, the movie has A-List actors, directors, producers, and a timely topic. What happened?

The #MeToo and #TimesUpNow movements combined with the high-profile sexual assault trial of Harvey Weinstein and others should have at least given Bombshell enough heft to make its money back. After all, Hollywood is supposed to be “woke”—re-oriented to promoting social justice and social change—giving its considerable financial and creative muscle to make movies exactly like Bombshell.

Ironically, Bombshell’s problem might be that it’s not “woke” enough—too much elite Hollywood and not enough real life for a movie that wants to push a true social agenda. 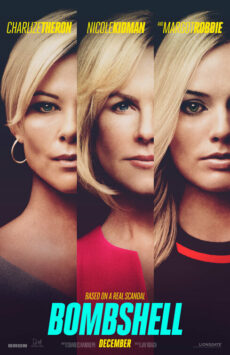 Certainly, sexual harassment is real. A national survey analyzed by the University of California at San Diego’s Center on Gender Equity and Health for the Institute for Women’s Policy Research found that 77 percent of women, and 34 percent of men, experience verbal sexual harassment in their lifetime. More than half of the women (17 percent of men) reported experiencing unwelcome sexual touching. An astonishing 27 percent of women (7 percent of men) reported experiencing sexual assault. Sexual assault is so widespread that it’s become a part of the college experience for most women. And the impacts are significant: Numerous academic studies show that systemic sexual harassment lowers productivity, increases turnover, and puts employers at risk. (A review of the academic evidence by the Institute for Women’s Policy Research with citations can be found here.)

The core problem with Bombshell, however, is not the issue, or its importance. Rather the heroes (or heroines) in the story don’t reflect the real-world of sexual harassment even if the villain(s) do. In fact, the movie may do more to alienate general audiences than to bring them in.

Bombshell follows the journeys of three ambitious, conservative, Fox News television journalists. Two of the movie’s characters are based (faithfully) on real-world people: Gretchen Carlson (Nicole Kidman) and Megyn Kelly (Charlize Theron, who is also a co-producer). The third character is a fictionalized. Kayla (Margo Robbie, Wolf of Wall Street, I Tonya, Once Upon a Time in Hollywood) is climbing her way to the top of broadcast news, aspiring to be an on-air personality or anchor. At the center of the conflict is the authoritarian and lecherous boss of the channel, Roger Ailes (John Lithgow).

All the performances in Bombshell are excellent. Theron, in particular, provides an uncannily real and Oscar-worthy performance as Kelly. Margo Robbie’s range shows why she is becoming one of the most sought after actresses in Hollywood. John Lithgow is convincing if physically unrecognizable in the role of Ailes.

Bombshell’s depiction of Ailes is also not far from the truth. Ailes ran Fox News with an iron fist. He used his power to direct content and careers. He also aided and abetted a hostile workplace for women (and, implicitly, gay workers), encouraged sexual stereotyping (ostensibly for ratings), and actively invoked professional retribution against those who challenged him. Ailes consciously built a “bro culture” at Fox News, believing his audience was primarily men, or women who accepted masculine aggressiveness, as part of their world-view. In short, when Gretchen Carlson was demoted at Fox News in a series of scenes depicted in the movie, her case of sexual harassment was credible.

In Bombshell, Fox News is represented as a hyper-masculine environment. Women survive by passing off insensitive and boorish behavior as “boys being boys.” To the director and producer’s credit, the movie focuses on these elements, not primarily on the network’s conservative politics or program content. Thus, in the movie, Carlson and Kelly increasingly push back against Ailes’ insistence on sexualizing the appearance of the on-air personalities. They also argue for on-air discussion of topics that might crack the masculine veneer and conservative brand of the network. While Hollywood might think conservatism and boorish male behavior are the same, the movie puts the politics in the backseat as a story driver.

But Hollywood’s biases show up in subtle but profoundly important ways. Ultimately, they undermine Bombshell’s message and the broader social movement its clearly attempting to promote.

Organizational cultures that tolerate or fail to address systemic sexual harassment marginalize employees, limit creativity and innovation, and undermine the dignity of those working in the organization. But this doesn’t come through in the movie. Each character faces sexual harassment and deals with its negative consequences, but their circumstances are too far removed to be relatable for many, if not most, viewers. The protagonists—Kelly, Carlson, and Kayla—are too distant from the average workplace experience to connect with the vast majority of people feeling its effects.

Megyn Kelly, the primary focus of the movie, grapples with offensive behavior and derogatory comments based on gender. But she is strong, an aggressive Type-A personality herself, and thrives because she has thick skin. This meshes well with a corporate culture driven by aggressiveness and domineering bosses.

Kelly can, and does, put up with her insensitive colleagues and derogatory comments. She is okay with this culture until she starts butting heads with Ailes. But Kelly has something most victims of sexual harassment do not have: status, power, and authority. She can weather Ailes and Fox News even as she pushes back. The stakes for her losing in this fight are relatively low. She’s already paid well and could move on.

Gretchen Carlson, on the other hand, represents the character who experiences the boorish behavior as well the punishing personality of Ailes. She is demoted and eventually fired. In real life, Carlson’s legal action eventually set the wheels in motion that brought Ailes down. But, as a protagonist, her situation is sympathetic but hardly relatable for the typical harassment victim (male or female).

Carlson may be out of a job—in the movie, this decision is more nuanced—but still has a nice house. She does not lose the respect of her colleagues. She can still work out in her own home as she watches the news unfold on TV. She has the influence and wherewithal to engage pricey, legally savvy lawyers to press her case. No middle manager, receptionist, coder, low-level engineer, or entry-level lackey is represented in her story.

Carlson got to the top and then started challenging an unlikable corporate CEO. She is unjustly cut down a notch, but she suffers little material damage to her career despite her humiliation and loss of dignity. Thus, for a movie, the consequences for Carlson are relatively low given her position and professional level of accomplishment.

Enter Kayla, the naive, innocent, but ambitious twenty-something, probably fresh from a college internship. She’s trying to break into television journalism. She is also a political conservative, so her political philosophy meshes well with the Fox News brand. (Kayla’s character, however, is fictional, a conglomeration of different women.)

The vast majority of people experiencing sexual harassment are more likely to connect with Kayla, the rising but non-established star, not Kelly or Carlson. She represents represents the powerless, the cogs in the wheel that don’t make enough to hire expensive lawyers. Unlike Kelly or Carlson, they can’t afford to walk away from their job. Yet they still put up with it or deny it, because they believe their professional future depends on it. They bear the brunt of the everyday indignity and humiliation of sexual harassment as they are objectified and dehumanized at work. However, Kayla’s role is instantly marginalized because the movie’s point of view is Megyn Kelly’s, and it’s her story to tell.

More problematically, Kayla’s character and her moral authority are diluted by her journey. Even though Kayla is a hard-core conservative, she inexplicably enters into a lesbian relationship with a gay coworker. Presumably, the relationship appears to point out the implicit hypocrisy of a workplace that projects certain attitudes that are also inconsistent with the values of the people who work there. But the gay relationship does little to further the plot or Kayla’s character arc. It’s a pure Hollywood plot device.

Certainly gay workers face harassment, fear, and intimidation in the workplace. This is wrong and should be stopped. This is not the issue. The problem is the specific gay romance characterized in Bombshell. It’s not central to the story and it structurally undermines the character of Kayla. A critical character most effectively ably to connect to a wide audience is largely taken out of the story. Statistically, fewer than five percent of the American population falls along the LGBTQ spectrum (according to nationwide Gallup polling, just one of many similar estimates). Fewer than 2 percent will identify outside the male/female binary. In other words, the vast majority of viewers are heterosexual, identify as heterosexual, and experience sexual harassment as heterosexual.

Kayla’s sexual confusion confounds the character’s arc in the story, making her journey about sexual discovery disconnected from sexual harassment. This is unfortunate, because it’s Kayla, played brilliantly by Robbie, who poignantly conveys the devastating personal consequences of workplace sexual harassment near the end of the film. Just about everyone aspiring to move up in the professional workplace would be able to relate to her experiences and the emotional toll it takes. The psychological consequences are real, and Robbie does a great job of conveying the degradation and humiliation that comes with that experience in a remarkably short and poignant scene.

Bombshell can’t adequately capture the devastating consequences of systemic sexual harassment in the workplace. It can’t capitalize on the awareness raised by the #MeToo and #TimesUp movements, the toxic corporate culture that nearly toppled Uber, or the stunning breadth of the harm done by the likes of Harvey Weinstein, Bill Cosby, former gymnastics national team doctor Larry Nassar (256 women and counting), or the Ohio State sexual abuse scandal triggered by Richard Strauss (who may have abused more than 200 male college athletes).

A fair question is whether Bombshell and its story might have been handled with more nuance, more relevance, and more effectively by one the industry’s top female directors. Bombshell was written and directed by men (although Theron’s production company was a producer). Human psychology shows that men and women process and work in profoundly different ways. Organizational psychology recognizes that the key to increasing productivity is acknowledging and tapping into the diversity of individual perspectives.

Perhaps a truly woke Hollywood would have recognized these differences and considered a female director and screenwriter. Near the top of any list of alternative directors (and screenwriters) would be Lorene Scafaria (my review of Hustlers here), Patty Jenkins (my review of Wonder Woman here), or Sofia Coppola (Lost in Translation). (A list of the top movie female movie directors can be found here.)

Paradoxically, Bombshell may be bombing at the box office because it isn’t woke enough. With a more layered understanding of the way men and women respond to different circumstances and work contexts, the movie might have found the wide audience it needed to make money and contributed to the social change it clearly wanted to nudge.