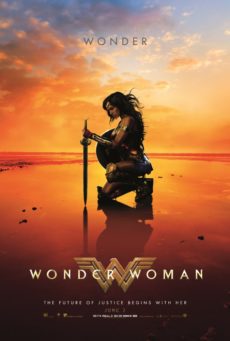 Wonder Woman is already one of the year’s most successful films just three weeks into its U.S. box office run, and for good reason: It’s a smart, well-executed action film. Despite acting that is just above average for superhero films—probably no Academy Award performances in this movie—the directing is top notch, special effects scaled to serve the story, and the screenplay holds the story together despite a few significant plot holes early on.

Wonder Woman is Diana Prince (Israeli actress Gal Gadot, Batman v Superman, The Fast and the Furious), the daughter of Queen Hippolyta (Connie Nielsen, Gladiator, One Hour Photo) who rules over a race of Amazon women warriors. Ancient Greek Gods created the Amazons to protect humankind from their own corruption. Hidden on the island of Themyscira, Queen Hippolyta forbids Diana, the only child on the island, to train as a warrior, while the queen’s sister, General Antiope (Robin Wright, The Princess Bride, House of Cards, Moneyball), recognizes the child’s natural abilities and begins training her in secret.

In 1918, American spy Captain Steve Trevor (Chris Pine, Star Trek, Hell or High Water, The Finest Hours) breaks through an invisible shield protecting the island and is pursued by a German warship. A grown Diana saves Trevor whose plane has crashed into the sea. A German landing party attempts to recapture Trevor, but they are defeated by the Amazon warriors at great cost to the women warriors (including the heroic death of General Antiope).

The site of a man befuddles Diana, whose isolation on the island has prevented her from interacting with humans other than Amazon warrior women. Trevor and his stories of the carnage in the War to End All Wars (World War I) convince her that Ares, the Greek God of War, has returned to corrupt men and unleash his evil. When she learns the Germans are developing a chemical weapon that will kill millions in order to secure victory, she is spurred to fulfill the destiny of the Amazon warriors’ mission to protect humankind despite her mother’s objections. She is determined to find Ares and destroy him, bringing the Earth back into balance and restoring the good nature of men.

The events unfolding in Themyscira, while essential for backstory, end up as the least interesting part of Wonder Woman. Far more interesting is Diana’s entry into war-torn, early, 20th century Europe where she confronts discrimination, prejudice, and the inhumanity of war. Her innocence is challenged early on at every turn in London and in the Allied war room as Trevor implores the all-male high command to recognize the threat posed by the German experiments with chemical warfare.

He is unsuccessful, but Trevor and Diana are determined and resourceful. Diana holds fast to her identity as mankind’s savior, dismissing the prejudices and ignorance of the mortals. She wins over Trevor and the motley band of soldiers he assembles for a clandestine attempt to find and destroy the German general and the gifted chemist Isabel Maru (Elena Anaya, The Skin I Live In, Van Helsing, Room in Rome) who created the lethal gas.

Diana’s innocence faces a full-throttle challenge in the butchery of trench warfare in northern France and Belgium. Her instincts and identity, rooted in her training as an Amazon, are challenged by the practical realities of war that prevent her from saving everyone despite her compassion, superhero powers, and prowess as a fighter. Rather than succumb to the horror, her resolve hardens and she leads. Her heroic commitment spurs her to even more aggressively track down Ares, who she believes is embodied in the persona of German General Erich Ludendorff (Danny Huston, Wolverine, Hitchcock, Robin Hood)—a suitable real-world villain although the character in the movie bears no resemblance to the actual WWI German general. Wonder Woman climaxes in an epic battle involving the inevitable confrontation between Diana and Ares (David Thewlis, Naked, War Horse, Harry Potter film series).

In many, perhaps most, superhero movies, the winner of the climactic battle is determined by who has the most powerful toys, power, or resolve. They are high energy events triggered by explosive emotion and reflective of the physical prowess bestowed on the characters through their super powers. Wonder Woman differentiates itself from the pack on this score, no doubt thanks to sophisticated directing of Patty Jenkins (Monster, The Killing, Five) and a smart script by Allan Heinberg (who is credited with relaunching Wonder Woman for DC Comics).

The Moment of Truth is in fact a Moment of Truth, and Jenkins and Heinberg use it to push the story forward as the penultimate point where Diana’s faith is challenged to the core, her innocence is completely purged, and she becomes a fully realized adult. The appropriately scaled special effects do not overwhelm the story so the audience sees Diana’s power come as much from the attitude and thought she brings to their use as the superhero tools she deploys.

Wonder Women contains an excellent story in a well-executed film that grapples with the conflicts between idealism and practicality, innocence and experience, gullibility and wisdom. Jenkins has crafted a film that infuses substance into a smart story. She uses well-crafted storytelling elements, such as defined and complex character arcs, to allow the anti-war social conscience that underlies the film to shine and provide a compelling context for the film.