Since mid-September 2019, the U.S. Federal Reserve has been fighting to contain a liquidity crisis in the nation’s money markets that was caused in large part by excessive spending by the U.S. government.

That surge in spending was prompted by “the worst budget deal in history” in late-July 2019, which forced the U.S. Treasury Department to begin borrowing massive amounts of money to provide the additional funds that a bipartisan majority of U.S. politicians authorized to spend. Consequently, the public portion of the national debt has been increasing to keep pace, reaching crisis levels in mid-September 2019.

The chart below shows the increase in the publicly-held portion of the U.S. national debt from the end of July 2019, through December 11, 2019. 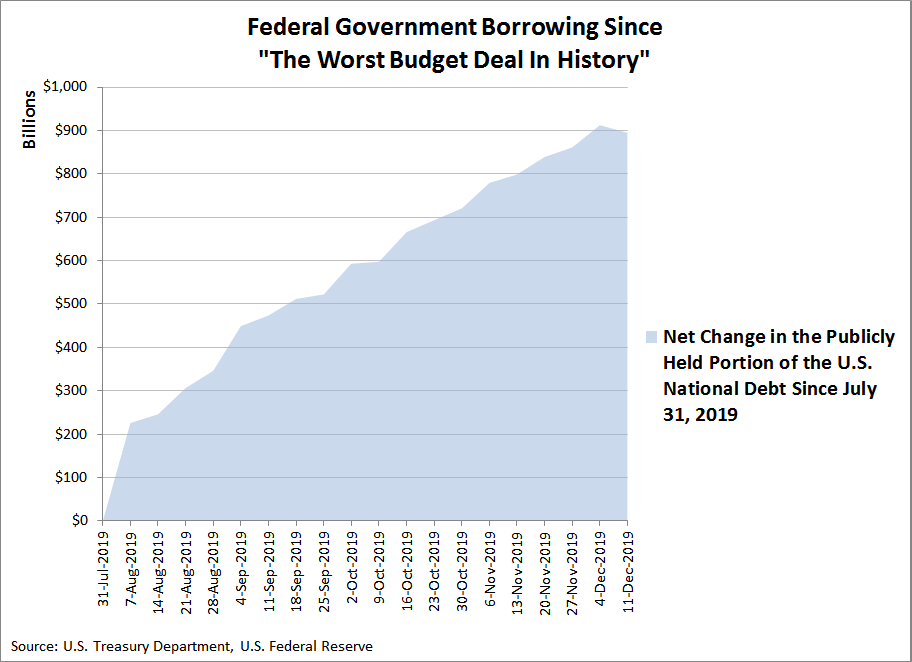 Federal Government Borrowing Since “The Worst Budget Deal In History”

There was only so much of this new government borrowing that the nation’s money markets could sustain before something broke, which is exactly what happened in mid-September 2019 as the Federal Reserve was forced to intervene in the nation’s money markets to fill a critical shortage of money by making emergency overnight cash loans, called “repos”, to cope with the developing liquidity crisis caused by the national debt growing too quickly.

Lee Adler of the Wall Street Examiner provides a colorful explanation of what happened between late-July 2019 and mid-September 2019:

The only way the market could finance all that Treasury issuance was through repo borrowing. That, folks, is margin debt plain and simple. The dealers and the banks were buying up Treasury issuance on 90% margin. In September, they said, No mas! They’d had enough.

The Bank for International Settlements (BIS), which is the central bank for central banks like the Federal Reserve, has pointed to the heavy reliance of U.S. repurchase, or “repo”, markets on just four banks to supply marginal lending, echoing events that occurred at the onset of the Financial Crisis of 2008.

The Federal Reserve has responded to the liquidity crisis by sharply increasing the amount of money it lends directly to the U.S. government. The chart below shows how much the Fed’s holdings of U.S.-government issued debt securities have increased in the almost-three months from September 18, 2019 to December 11, 2019. 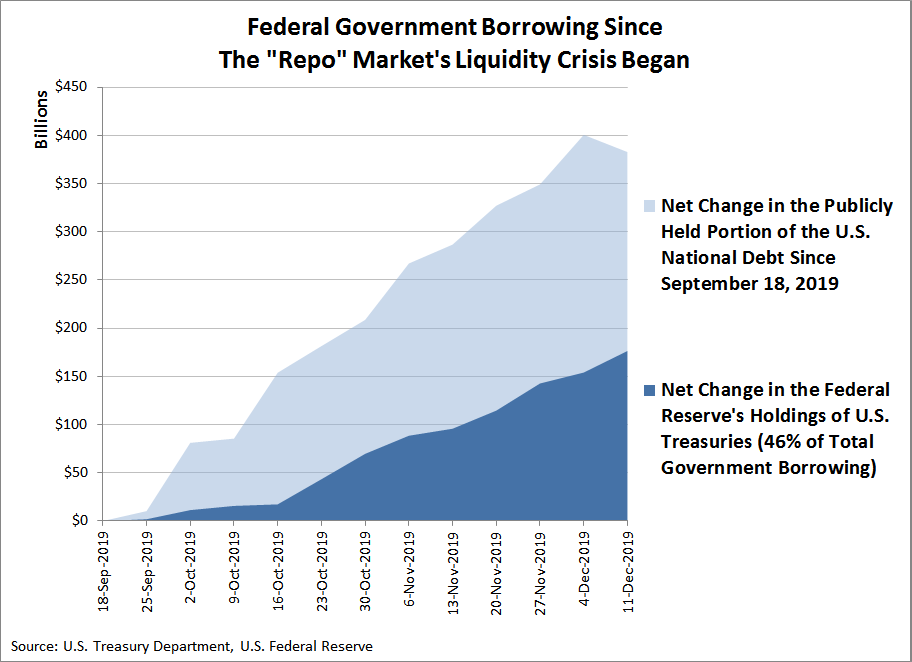 During this period, the U.S. Federal Reserve has become the dominant lender to the U.S. government, providing over 46 percent of all the funds the U.S. government has borrowed since the repo market liquidity crisis struck, with the central bank’s balance sheet expanding at the fastest pace it has recorded since the 2008 financial crisis.

The Federal Reserve’s role in sustaining the U.S. government’s excessive spending will continue well into 2020, where projections indicate the Fed will loan money to cover 40 percent of the U.S. Treasury’s net issuance of debt throughout the year.

But between now and 2020, the Fed may be forced to fund even higher percentages of the growth in the U.S. national debt, because the repo market still hasn’t recovered from its liquidity crisis.

All in all, the Repo Liquidity Crisis of 2019 may be both the most predictable and the most unnecessary financial crisis ever in American history. It could all have been avoided, if not for a bipartisan coalition of spendthrift politicians who put their election campaigns ahead of any concept of fiscal restraint.

P.S. Here is an update on the extraordinary amount of government debt the Fed is now financing. From July 31 through December 18, 2019, the Fed has loaned the U.S. government 24% of the net $930 billion it has borrowed. From the start of the “repo” crisis, the Fed has loaned 47% of the net $418 billion it has borrowed, all during the last three months. Since October 16, which is when the Federal Reserve really put the spurs to its lending activity, the Fed has financed two-thirds of the net increase in the public portion of the U.S. government’s total public debt outstanding.