That’s a very big number. Usually whenever anyone talks about the national debt, its size is compared with that of the U.S. economy, the largest in the world, which was estimated to be $21.3 trillion through the second quarter of 2019. Against that benchmark, the U.S. national debt is between 105 and 106 percent of the nation’s GDP.

But that may be the wrong benchmark to use. Because the national debt is owed by the U.S. government to its creditors and must be paid back to them from its income, it would make more sense to compare the size of the national debt with the amount of money it takes in each year, which is predominantly made of up receipts from taxes. 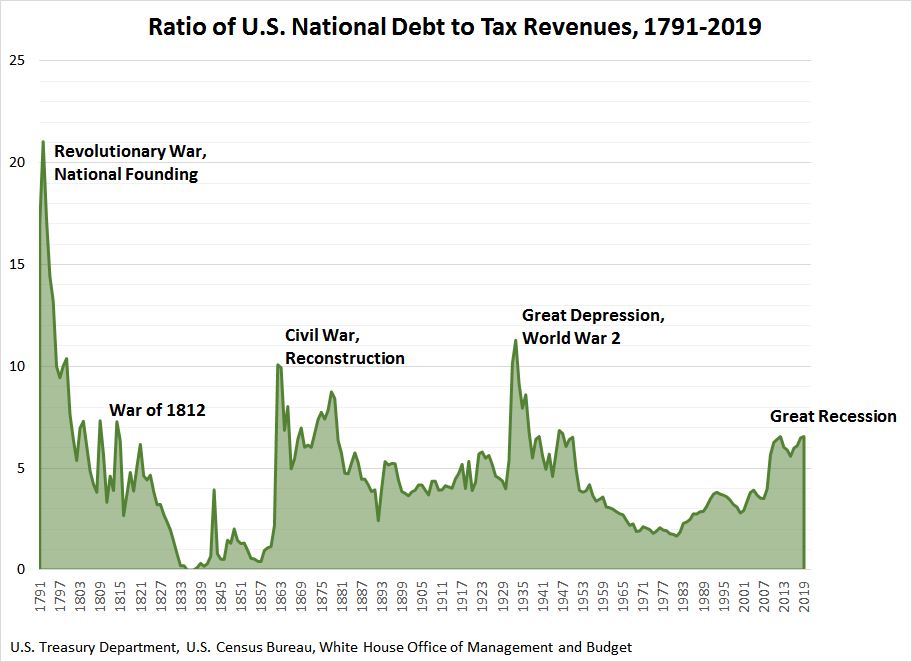 Over time, it is the spikes in this ratio of national debt to the federal government’s tax income that stand out. Nearly all coincide with or follow events that would be described as crises, which have each involved the level of national debt rising to be greater than five times the U.S. government’s annual tax revenues. These periods include the Revolutionary War and national formation, in which the federal government assumed debts previously held by states joining the union, to the War of 1812, to the Civil War and Reconstruction, and the Great Depression and World War II.

And then, we see a new spike in the period of the Great Recession, where the ratio of the national debt to the government’s annual tax revenues rose rapidly above this level to reach a peak of 6.5 twice, once in 2012 and now again in 2019.

With the national debt having risen so high with respect to the U.S. government’s revenues, is it wrong to consider that we are indeed experiencing a crisis in the current era? Especially with the government already collecting record high tax revenues. Does anything about this time really make it all that different from all the previous times of crisis when the burden of the national debt has risen so high?