The U.S. government set new records for spending and tax revenues in July 2019. But because spending has risen so much faster than its tax collections, the latest U.S. Treasury monthly statement also confirms that the government’s budget deficit through the first 10 months of its 2019 fiscal year now exceeds the full year deficit of $777 billion recorded in 2018.

Terence Jeffrey of CNS News describes how today’s spending compares with the previous record for inflation-adjusted government spending, which was set back in 2009:

The federal government spent a record $3,727,014,000,000 in the first ten months of fiscal 2019 (October through July), according to the Monthly Treasury Statement released today.

Before this year, the most that the federal government had ever spent in the first ten months of a fiscal year was in fiscal 2009, when the Treasury spent $3,576,745,930,000 (in constant June 2019 dollars, adjusted using the Bureau of Labor Statistics inflation calculator).

Federal spending was impacted in fiscal 2009 by the recession that was ongoing when that fiscal year began. At the beginning of fiscal 2009, President George W. Bush signed the Troubled Asset Relief Program to bailout failing banks. Later that fiscal year, President Barack Obama signed the American Recovery and Reinvestment Act, aimed at stimulating the economy.

The chart below shows the amount of government spending and tax revenues by month for the U.S. government’s 2015 fiscal year through the fiscal year-to-date for 2019: 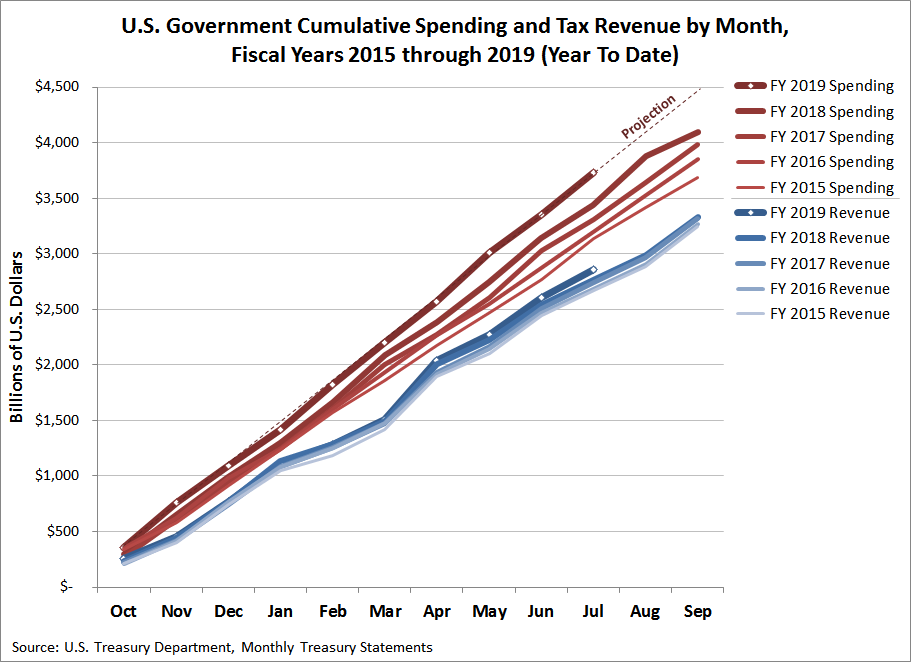 But wait, it gets worse. Between now and the end of its current fiscal year at the end of September 2019, the U.S. Treasury Department projects it will borrow $443 billion, more than double its previous forecast for borrowing in April, because the government needs to rebuild its supply of available cash to avoid defaulting on its liabilities because it has nearly run out of money.

After borrowing just $40 billion in the past, April-June period, which left the Treasury with a quarter end cash balance of $264 billion, in the current quarter, the Treasury now expects Treasury issuance to explode higher, and borrow a whopping $433 billion in net marketable debt, a massive $274 billion higher – or more than doubling – its prior forecast announced in April 2019.

The reason for this debt issuance flurry? To rebuild the cash balance back to a level of $350 billion, which is where the Treasury expects its end-of-September cash balance to be, up from just $85 billion as of the April 29 forecast.

The bipartisan debt deal that President Trump reached with House and Senate leaders last month was struck to avoid the risk of a cash flow default.

Is that really any way for a government to operate?