The Return of Quantitative Easing

The liquidity crisis feared by financial analysts has arrived. Sparked by a surge in the U.S. government’s borrowing following the Bipartisan Budget Deal, the Federal Reserve has been forced to intervene in the nation’s money markets to fill a critical shortage of money by making emergency overnight cash loans, called “repos”, for the first time since the financial crisis of 2008.

The Fed has been heavily buying repurchase agreements (repos). Translated, this means they’re trying to reduce short term interest rates. Quite aggressively too.

Nathan Tankus explains that this is a response to the Basel III accords for avoiding and managing financial crises. These are not official yet, but the U.S. is following them. This is the first time they’ve had to do this particular thing, and it’s been clumsy, but not a problem.

Basically, the really large banks now have to have enough liquidity to get themselves through 30 days of bad news. But that means they have to hoard liquidity. But liquidity is costly to hold; in the past their (internal) liquidity would go up and down with interest rates, as they sold and bought Treasury bills. Those big banks have been short on liquidity so they’ve been hoarding it. This drove up rates. A central bank is supposed to respond to this by buying securities from the banks. That’s the repos. The Fed was a bit slow on the uptake that this is the way the world works now.

There’s more to it than that, however. Because the flood of new government-issued debt securities that the U.S. Treasury will be issuing in the months ahead is so large, the Fed will feel compelled to “resume the organic growth of the balance sheet sooner than we thought,” in the words of Fed Chair Jerome Powell this past week. Which is to say that the Federal Reserve is getting set to restart its quantitative easing policies within the next few months.

Quantitative easing (QE) is an extraordinary monetary policy that the Federal Reserve implemented during the Great Recession to stimulate the economy after it had cut interest rates to zero percent by purchasing government-issued debt securities, such as U.S. Treasury bills and bonds, to get the effect of additional cuts to interest rates. As a result of its QE policies, the Federal Reserve became one of the largest single creditors to the U.S. government at a time when the size of the national debt was surging.

How big of a creditor? At the peak of its second period of quantitative easing at the end of July 2011, the U.S. Federal Reserve had lent the U.S. government over 30 percent of all the money it borrowed from the public since it first launched its extraordinary monetary policy at the end of September 2008. 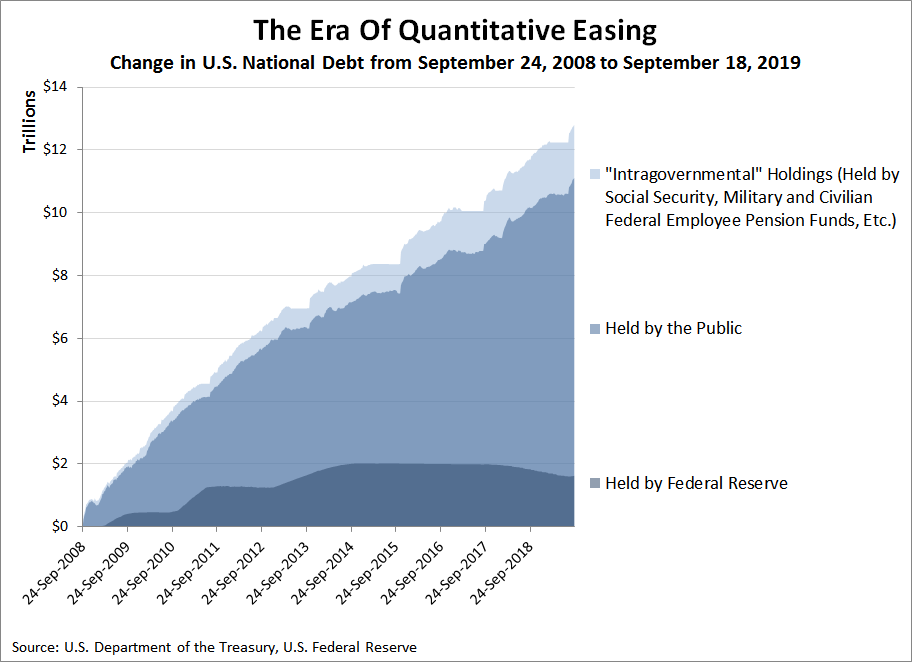 Since that time, the Fed’s share of the U.S. government’s total public debt outstanding has fallen off as the U.S. central bank has sought to “normalize” the holdings on its balance sheet, but the new liquidity crisis is forcing it to reverse that policy and to begin a new era of quantitative easing. Bloomberg reports on the comments of former Fed official Simon Potter:

A former top Federal Reserve official, who oversaw the U.S. central bank’s trading desk, has warned that the type of actions taken so far to quell this week’s turmoil in money markets may not be enough to keep conditions calm and fresh debt purchases may be needed.

Simon Potter, the former New York Fed executive, made the remarks during a conference call that Bank of America hosted for its clients, according to three people who listened.

Potter cautioned that policy makers may have to expand the central bank’s balance sheet through outright purchases of U.S. Treasury securities, to ensure stable liquidity conditions at the end of the quarter as well as at year-end, said the people, who declined to be named because the call was private.

The recommendation follows a week of intense upheaval in money markets during which short-term interest rates spiked and pulled the Fed’s policy benchmark rate outside its target range. It also goes beyond what the New York Fed has promised so far to keep the situation in check going forward.

There has already been an increase in the amount of U.S. Treasuries on the Federal Reserve’s balance sheet in recent weeks as the Fed has reversed its normalization policy. One effect of the Fed’s new interventions will be to lower the cost of borrowing for the U.S. government by lowering interest rates.

But there are severe costs to go along with that apparent benefit. Because all interest rates would be lower as a result of the Fed’s new QE intervention, a lot of Americans who rely on interest income from their savings, such as retirees, can expect to have less income to live on. In response, a lot of these folks will chase riskier investments for higher returns, which will put them at risk of even greater losses. The short history of QE is littered by such savers who were crushed by the experience.

The new financial crisis could have been avoided, if only a bipartisan majority of politicians in Washington, D.C., could have restrained the growth of their spending to sustainable levels. But they wouldn’t, so here we are.