Health insurance costs have gone through the roof since the Affordable Care Act (ACA) fully went into effect in 2014. In 2019, those costs have gotten so out of hand that relatively higher-income earning American households who used to buy health insurance are instead choosing to drop it.

That’s a major finding from the Centers for Medicare and Medicaid Services’ 2019 report on trends in subsidized and unsubsidized enrollment. Health Exec‘s Amy Baxter describes the report’s findings:

Enrollment of people who are ineligible for subsidies on the individual healthcare market appears to be slowing down, according to a recent report from CMS. In fact, enrollment dropped 1.2 million, or 24%, from 2017 to 2018, according to CMS.

Those who did qualify for subsidies based on income levels saw a 4% increase of 330,000 in enrollment over the same time period, according to the report. Enrollment across the entire individual market dropped 7% nationally from 2017 to 2018. During that time, premiums increased 26%, CMS wrote.

The U.S. Census Bureau’s annual Consumer Expenditure Survey for 2019 confirms the decline in health insurance enrollment, which is occurring among higher income-earning households:

Between 2017 and 2018, overall health insurance coverage decreased 1.0 percentage point for people in families with income from 300 to 399 percent of poverty and 0.8 percentage points for people in families with income at or above 400 percent of poverty. During this time, the overall health insurance coverage rate did not statistically change for any other income-to-poverty group.

Now the question is why. Is it because health care costs are increasing? Or could it be for some other reason?

Annual data from the Consumer Expenditure Survey breaks household expenditures for health care down into four categories: health insurance, medical services, drugs, and medical supplies. The chart below presents the annual average out-of-pocket costs for each of these health care expenditures from 2008 through 2018. 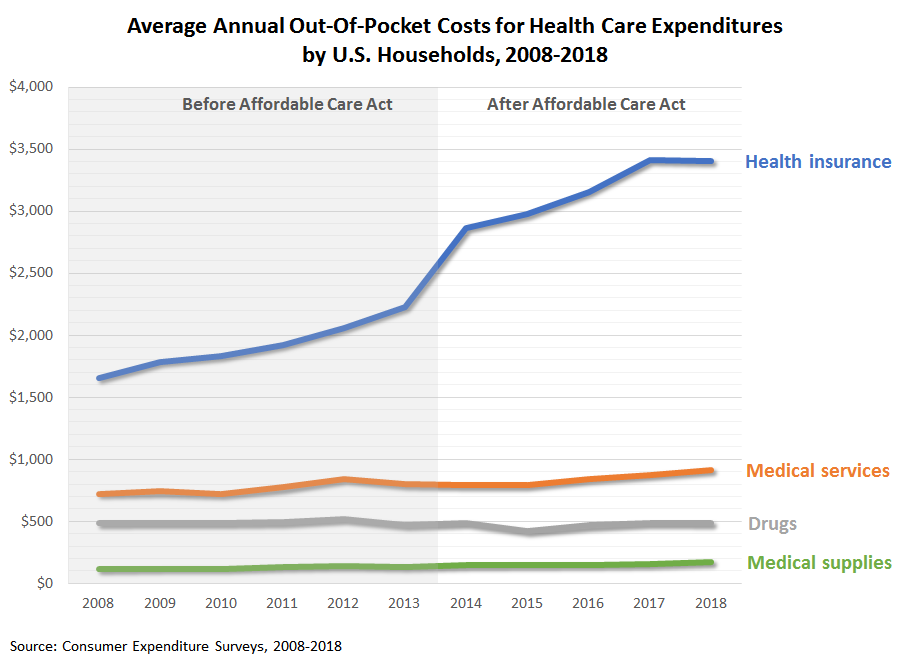 Since the Affordable Care Act went into effect in 2014, the data indicate that average health care expenditures for drugs has held steady and that expenditures for medical services and medical supplies have increased at fairly slow rates, keeping consistent with their pre-ACA trends. But expenditures for health insurance have escalated rapidly since 2014. They only begin slowing in 2018, largely because of modest reforms introduced by the Trump administration during 2017.

Why has health insurance become so much more expensive so quickly since the Affordable Care Act went into effect in 2014?

There are many reasons behind the ACA-caused increases in health insurance costs. First, the U.S. government’s implementation of the Affordable Care Act has been exceptionally wasteful, with Investor’s Business Daily tallying the total waste it has produced since it was passed into law at $55 billion, none of which went toward providing medical services, drugs, or medical supplies.

Second, and most importantly, Affordable Care Act-compliant insurance requires Americans who buy it to pay increasing sums for very little in return.

Travis, a millennial personal finance blogger, wrote about his experience with his Affordable Care Act Bronze-level plan back in 2017, after he became one of those people who had to pay its full cost:

My ACA Healthcare Plan Covered Basically Nothing for Me

The ACA covers a lot, but only for certain people. If I needed preventative care for a host of items, I could get it. Free birth control or an IUD as a woman? I could get it. If I had a pre-existing condition and couldn’t get insurance before the ACA, I can get care now.

So I’m not trashing this law for the folks who appreciate the benefits they have under it. Rather, I’m saying that the ACA has made healthcare so burdensome and expensive for young, healthy folks like me that it’s impossible to have a functioning insurance market while it exists.

I experienced this first hand when I started earning enough of an income this year to not qualify for any subsidies (basically anything above $40,000 for an individual). Now, I was confronted with the true cost of my healthcare plan. I paid $204 a month for the Cigna Missouri Connect 5500 HSA Bronze Plan.

Here’s what’s crazy. My deductible was $5500 a year and then a $6550 out of pocket maximum. So keep in mind I’m paying $2400 a year in premiums for a policy that has a $5500 deductible. If I do anything short of have major surgery in a particular year, the policy essentially covers nothing.

So here I am, trying to spend money on things that make sense for me personally, and I’ve got to make a sacrificial offering of over $7000 to America’s screwed up healthcare system before I get any benefit from having insurance at all.

But the Coverage Was Actually Even Worse

So I looked into my plan a little more, and I realized that it only covered in network providers. What does that mean you say? The plan designated one hospital system in my city as in network. Luckily, that was the same hospital where my fiancee worked, so at least that helped some.

However, what if we were traveling and I needed some non-emergency care from another hospital? What if I needed to see a specialist who didn’t work in that hospital system because I contracted a rare illness? The plan I had covers $0 of anything out of network. So effectively outside of an ambulance ride from a car accident where I’ll die if I don’t get medical care, my health insurance is basically worthless outside of the city of St. Louis.

Affordable Care Act health insurance is an increasingly expensive product that makes sense only for people who aspire to a life of serfdom. For the vast majority of Americans, that’s a road best never traveled down.