The Patient Protection and Affordable Care Act (ACA) was supposed to make the cost of health insurance more affordable by slowing the rising trend of increases in health insurance costs. The controversial law was passed in 2010 on a strict party line vote, with nearly all Democrats in favor and all Republicans opposed.

The law went into effect in 2013 and by now we all know the story. Instead of bending the cost curve downward, as promised by then-President Obama in 2010, health insurance costs spiked sharply upward when the law took effect in 2014 and then continued to increase through the remainder of President Obama’s tenure in office.

The first chart shows the average annual cost of health insurance premiums and the combined cost of premiums and deductibles for individual coverage from 2008 through 2019. 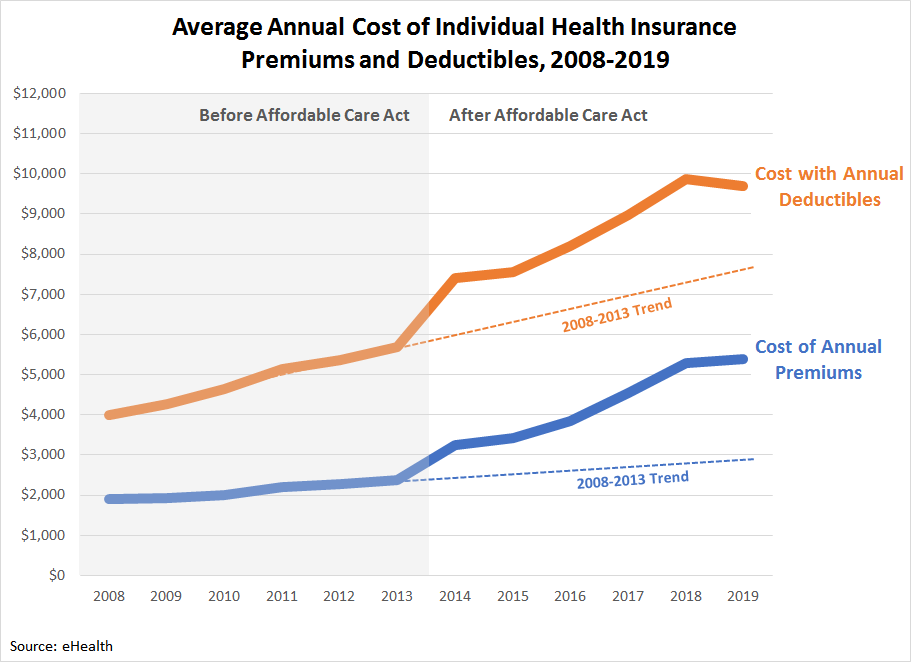 This chart confirms the average cost of health insurance premiums and deductibles for individual Americans have risen well above the trend they were following in the years from 2008 through 2013, before the Affordable Care Act fully took effect in 2014. In 2014, these costs rose sharply and through 2018, continued to increase at a faster rate than they had been growing in the five years before the ACA went into effect. That trend changed only after 2018, as several modest reforms introduced by the Trump administration slowed that exponential rate of growth.

The second chart shows a similar pattern for the average cost of family health insurance coverage during the same years, but the main difference from individual coverage is that the average annual deductible for families increased far more in 2014 when the ACA went into effect than it did for individuals. 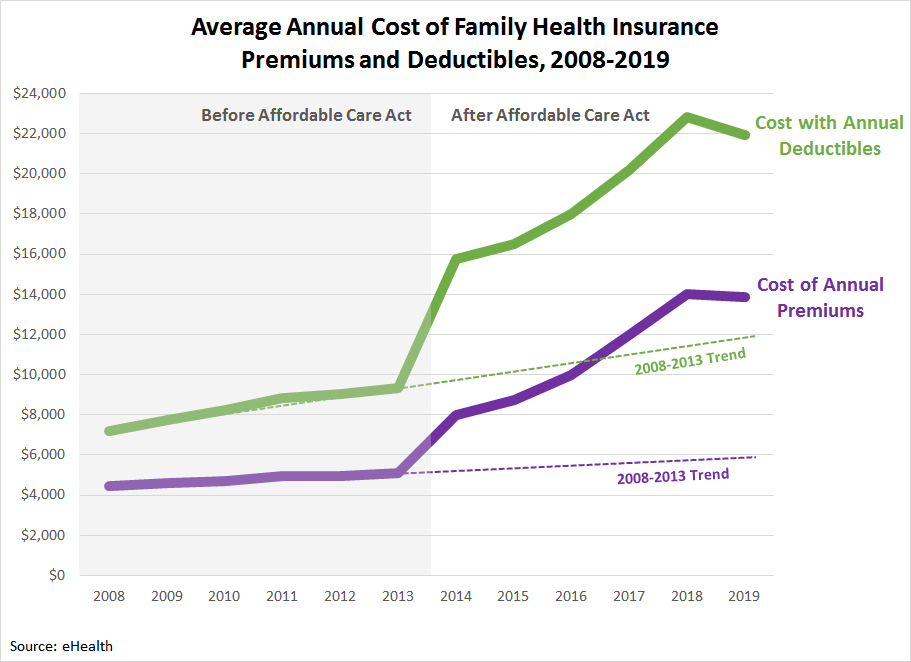 The average annual premium and deductible data in the two charts above comes from the private health insurance firm eHealth for the years 2008-2017 and 2018-2019. As of this writing, average cost data for the health insurance policies that Americans buy for coverage in 2020 should become available in several months.

The failure of the ACA to restrain the growth of the cost of health insurance was not a surprise. The Independent Institute’s senior fellow John C. Goodman predicted the Affordable Care Act would fail to restrain the rate of growth of the cost of health insurance coverage for Americans shortly after it became law in 2010. As the charts above demonstrate, the government’s intervention sharply increased its cost instead.

All this has become relevant again today because many of the leading candidates now running for president in 2020 are calling for an even more radical and costly expansion of government control over health care in the United States without addressing any of the factors that led to the runaway health insurance costs that occurred because of the Affordable Care Act.

All of these presidential primary candidates supported the passage of the Affordable Care Act. If nothing else, their support for an even more intrusive government intervention in American health care is a tacit admission the ACA is a failure.