With the deadline for U.S. residents to file their 2018 income tax returns having once again come and gone, a good question to ask is, How much money does the federal government collect each calendar year?

The U.S. Treasury Department’s Monthly Treasury Statements are the sources for the numbers shown in the chart below for the tax years of 2016, 2017, and 2018. 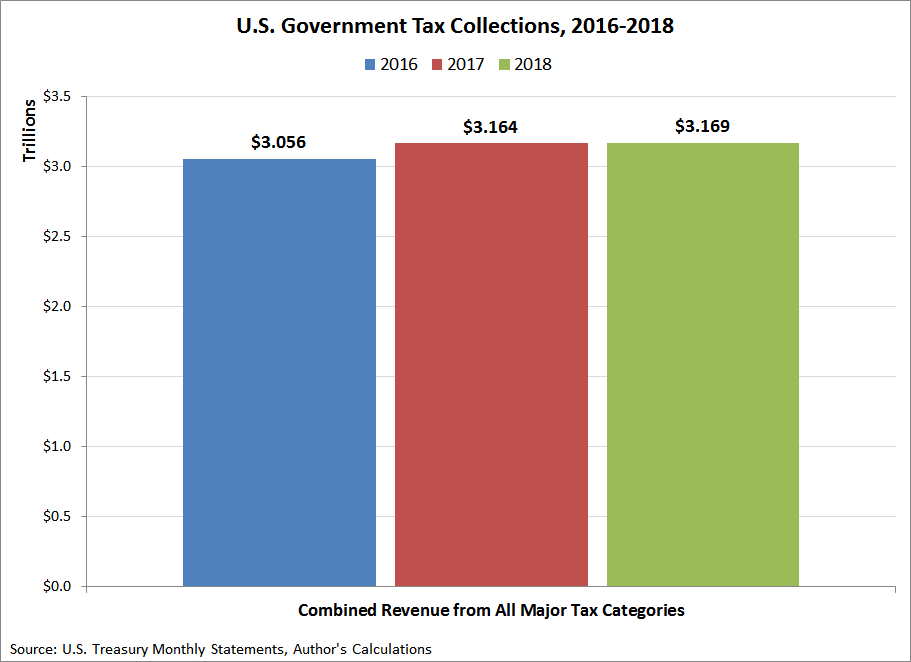 Uncle Sam receives a pretty steady annual income from his tax collection racket, which is surprising because the U.S. government enacted significant income tax cuts for corporations and individuals in 2018.

Although many people might expect that the government’s revenues from these sources would be down in 2018 when compared to previous years, the numbers indicate that revenue fell only for corporate income taxes.

The amount of money that the U.S. government collected from individual income taxes actually rose. 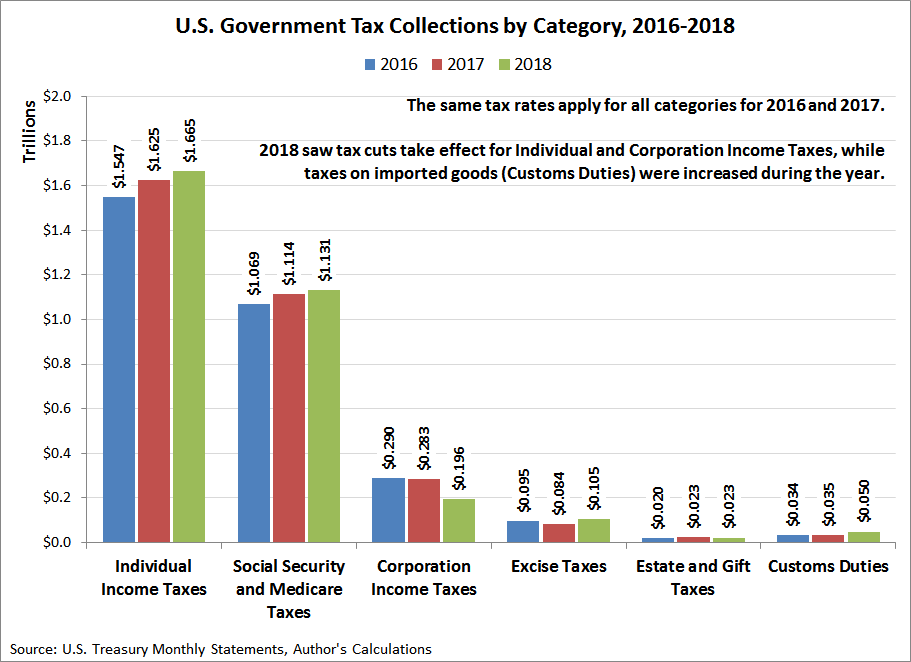 There are several reasons that individual income-tax revenue increased. First, more Americans earned incomes in 2018, with many earning higher incomes and working more hours than they did in 2017, which boosted the U.S. government’s tax collections from individual income taxes by $40 billion and its tax collections from Social Security and Medicare taxes by $17 billion.

Part of that increase in individual income resulted from the reduction in corporate income taxes, which led many employers to pass through more of their business revenue to their employees in the form of adding new hires to their payrolls and rewarding many employees with raises and bonuses. Many corporations also increased the dividends they paid to their shareholders, which boosted that form of individual income as well, with dividends subject to dividend income taxes. Also, some corporations bought back stock from their shareholders, with proceeds becoming subject to capital gains taxes as part of the shareholders’ income taxes.

Another reason is the stronger growth that the U.S. economy experienced in 2018. The tax cuts are believed to have stimulated the economy to achieve its strongest annual growth since before the 2008 recession. That greater economic activity helped boost the U.S. government’s revenues from its excise taxes by $21 billion, whose rates were unchanged by the Tax Cut and Jobs Act of 2017.

Together, faster economic growth and increased numbers of Americans earning higher incomes led to increased individual tax collections in 2018, even though most Americans are seeing their effective individual income taxes decline when compared to what they would have paid on the same incomes in the 2017 tax year.

The tax cuts did not, however, fully pay for themselves. The U.S. government’s tax collections during the 2018 calendar year rose above their 2017 level only because the U.S. government also increased its taxes on imported goods from several nations in 2018, most notably China, as part of President Trump’s trade war strategy. These increased tariff revenues added a little over $14 billion more to the U.S. Treasury’s coffers in 2018 as compared to 2017, but with American businesses and consumers paying a portion of the increase through higher prices.

Tax collections from U.S. corporation income taxes fell by $88 billion as a direct result of the tax reform, but overall, the U.S. government collected some $5 billion more in taxes in 2018 than it did in 2017 because of the way its other major sources of revenue from its taxes increased to offset this reduction.