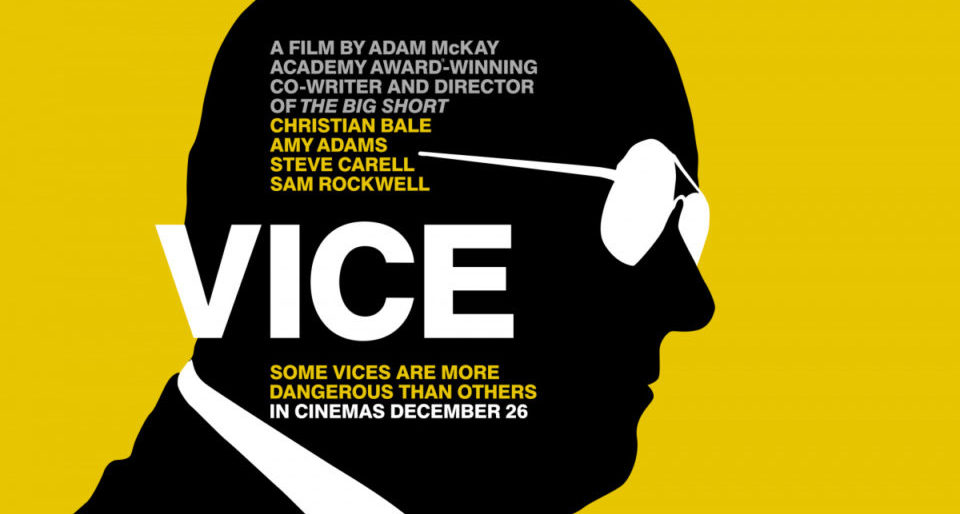 The Vice in Vice

Viewers with more than a passing familiarity with Republican national politics over the past thirty years are likely to leave theaters with mixed feelings (at best) after seeing the Golden Globe award-winning movie Vice. The narrative film by Adam McKay (The Big Short, Talladega Nights, Anchorman 2) is a line-blurring, occasionally satirical look at the political career of former Vice President Dick Cheney and his rise to power. Released nationwide on Christmas Day, Vice is creative and, at times, artistically brilliant. The distortions in the narrative, however, are so partisan and propagandistic many will have trouble, as I did, appreciating the movie’s artistry.

I am no Dick Cheney fanboy. As a libertarian, large swaths of the Republican policy agenda fashioned and implemented by Dick Cheney and others are an anathema to my views on governance and the proper scope of political power. These disagreements include those squarely in the sights of Adam McKay’s scathing narrative: the dramatic expansion of executive power in the White House, the terrifying abuse of surveillance and torture as part of a national anti-terrorism campaign, misguided military adventurism that continues to kill hundreds of Americans and thousands of innocent civilians. I also largely agree that Cheney has been a principal architect of the military and intelligence Deep State and the expansion of state control at the expense of individual liberty. But McKay’s narrative crosses several lines in his exuberance to vilify him, even in a narrative film.

Unfortunately, Vice squanders its artistic excellence by refusing to do what writer-director Adam McKay accomplished with his brilliant narrative expose of the 2008 Financial Crisis, The Big Short. McKay’s movie and academy award-winning screenplay provide an excellent window into several root causes of the housing and financial crises that triggered the Great Recession. (My review of The Big Short and its analytical accuracy is discussed here and in Chapter 5 of Contemporary Film and Economics.) On substance, Mckay takes pains to provide a nuanced approach to the economic crisis and its human toll, informed by varied perspectives and viewpoints. The effect is dramatic, educational, and compelling visual storytelling.

In Vice, McKay has chosen to present the political power couple of Dick and Lynne Cheney as caricatures of blind (if brilliant) political ambition. While he struggles to portray the Cheney’s with some empathy, McKay’s effort largely falls flat because the relationship seems to be fashioned from the original sin of political ambition. This is particularly evident over the arc of the movie through a critical thread dealing with the Cheney’s gay daughter.

According to McKay’s telling, Lynne Cheney (Amy Adams, Arrival, American Hustle, The Fighter) is the chief motivator and emotional mentor to young Dick, played by Christian Bale (The Dark Knight trilogy, The Big Short, Hostiles) in a Golden Globe Award-winning performance. Dick is an unfocused ne’er-do-well, but Lynne sees his potential. She also sees him as her ticket out of an abusive home life and a future limited by Wyoming’s conservative, rural culture. Dick struggles to find focus and direction after he is kicked out of Yale for poor grades, falling into a yeoman job as a telephone linesman in their native Wyoming. She prods and inspires him to be more ambitious.

Dick Cheney ends up securing a coveted internship in Congress and is astute enough to grab onto the coattails of the politically powerful Donald Rumsfield (Steve Carell, The Big Short, Battle of the Sexes, Marwen). Cheney is a quick and patient study, and, in due time, he rises to become President Gerald Ford’s White House Chief of Staff (the youngest), an influential Congressman from Wyoming (1979 to 1989), George H.W. Bush’s Secretary of Defense (1989 to 1993), and Vice President of the United States under George Bush (2001 to 2009).

McKay uses a variety of film techniques to keep the audience hooked into his narrative. Flashbacks, oral and documentary-style written narration, inventive cinematography using visual contrasts, false narratives and incongruent story trajectories, among others, are used to raise questions about Cheney’s ethics and link decision points across disparate timelines. Video of ground forces engaged in fierce desert fighting in the Middle East (Iraq or Afghanistan) are flashed into a scene where Cheney (and others) are making decisions about whether to invade Iraq in the aftermath of the Twin Towers attacks on 9/11.

Along the way, McKay plays fast and loose with facts and context. Some of the more egregious cases propagate flat-out falsehoods. For example, one of the movie’s transitions link’s Cheney’s political career under Gerald Ford to Ronald Reagan. The film pauses just just long enough in the arc to provide glimpses into the forward thinking, progressive policies of Jimmy Carter as solar panels are installed on the White House roof the president talks about the inevitability of solar as an alternative to fossil fuels. The movie implies this was a pre-emptive strike against climate change when in fact Carter’s move was in response to rising gas prices due to OPEC oil embargoes and the (misguided) belief fossil fuel resources were physically scarce. Forty years later solar power requires deep government subsidy to remain viable even as the justification for its use has shifted to climate change.

At the same time, the movie’s narrator comments on how Ronald Reagan’s presidential election in 1980 triggered a flood of money from billionaires and special interests to create right wing think tanks and fund lobbying organizations to dismantle alternative energy programs, reduce regulation on businesses, cut taxes, and build the military. The movie’s narrator explicitly cites the Koch Brothers. The Koch Brothers were libertarians, not conservatives, and did did not become active in conservative Republican politics until the mid- to late-1990s. The film also flashes an image of the Cato Institute, which is a libertarian think tank (funded at the time by the Kochs) that actively, vocally, and consistently advocated against almost every policy McKay highlights as part of Cheney’s policy agenda–expanded executive presidential power, militarism, government surveillance, torture, etc. McKay is clearly playing on the false narratives that permeate current liberal political discourse irrespective of facts or historical context. (See, for example, the false narratives propagated by progressive academics such as Nancy MacLean here and here.) (Disclosure: I worked for the Cato Institute in the mid-1980s and have held leadership positions in free market think tanks since then.)

At no point does McKay allude to anyone outside Cheney’s Republican circle as harboring the same ambitions. This narrative is also deceptive and misleading. Cheney did not invent executive privilege and the quest for expanded executive power in the White House. He was not the first to use the ambiguities of the U.S. Constitution and the permissive interpretations of the law by the U.S. Courts to greatly expand the executive powers of the presidency. The many expansions of executive power were pioneered, aided, and abetted by Democrats and Progressives. While Cheney and friends are rightly credited with novel new interpretations of how to expand executive power, they are simply continuing a long contemporary trend toward strengthening what Arthur M. Schlesinger, Jr. called the “Imperial Presidency.” The expansion of presidential power in modern times dates at least to Franklin D. Roosevelt’s New Deal, and others have traced it back to Abraham Lincoln. As a practical matter, critics of expanded presidential power are partisan–opposed to it when their party is out of power, and in favor of it when their party has political control.

The partisanship on display in McKay’s narrative film is unfortunate on many levels. As a writer and director, he has squandered the acting talents of an exceptional cast, brilliant editing, and dazzling cinematography. Amy Adams and Christian Bale are top shelf actors, among the fewer that could pull off Shakesperian wordplay as contemporary pillow talk, and they do it with superb comic effect in Vice at McKay’s direction. While McKay does a solid job of portraying the genuine love and affection the Cheney’s had for each other as well as their children, the emotional impact is diminished, even relegated to a minor theme. The emotional bond seems contrived for political purpose by the time viewers are more than a few minutes into the film.

McKay showed a deftness and intelligence that was remarkable for its ability to help the lay public navigate complex issues in The Big Short. Artistically, McKay’s talent is also on full display in Vice, earning accolades including Golden Globe nominations for best director, best screenplay, and best motion picture (musical or comedy), among others. Unfortunately, he appears to have traded in his talent and gift for storytelling to promulgate a politically partisan narrative that villainizes rather than probes an important political figure who reshaped (some would more charitably say “modernized”) the vice presidency as well as the presidency. In this way, McKay’s creative choices in Vice contribute to a political climate that is divisive and less thoughtful, undermines effective policymaking, and unnecessarily contributes to rising levels of discord and political intolerance. The movie also diminishes the importance and role of ideas as legitimate components of political discourse in a democratic process.

Of course, none of this criticism implies that McKay shouldn’t use his wealth or his craft to articulate his views of public figures or social issues of the day. Quite the contrary. This activity is properly and quite literally his right.

Nevertheless, the partisan nature of McKay’s narrative will likely mean his message will backfire. He has failed to take the ideas, political concerns, and elected representatives of a large swath of the American public seriously. In fact, based on the final scenes of the film, he may well not even understand them. Moreover, he has displayed a striking ignorance of the larger sweep of political history. The marketing subtitle for the film, “The Untold True Story That Changed The Course of History,” is anything but.

Rather than use his craft to provoke a thoughtful consideration of alternative points of view, he has distracted from his own artistry, undermined his narrative, and diminished his ability to tell an important story. This is a shame because the American public may well have needed this discussion more now than any other time in recent memory, and, McKay may have been uniquely suited to telling it.

Samuel R. Staley is a Research Fellow at the Independent Institute and Managing Director of the DeVoe L. Moore Center in the College of Social Sciences at Florida State University. He is a contributing author to the Independent books, Property Rights and Housing America.
Posts by Samuel R. Staley | Full Biography and Publications
Adam McKay Executive power Republicans Richard Cheney Vice
Comments
Before posting, please read our Comment Policy.