The Big Short’s Oscar Win and Capitalism in Film 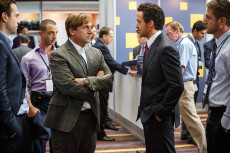 My blogging colleague Bob Murphy did a nice job of reviewing The Big Short in January, but the film is worth revisiting in light of its Academy Award win for best adapted screenplay. Nominated for five awards, including Best Picture and Best Director, with fine acting by all the principals in the star-studded cast, the fact it won on the strength of the story may bode well for capitalism in Hollywood.

The Big Short chronicles the financial meltdown that triggered the so-called Great Recession in the wake of the bursting housing bubble, and is based on the 2010 book by Michael Lewis. The film follows the conventional narrative, taking aim at Wall Street bankers while ignoring the bigger policy issues such as relaxed lending rules and federal policies that pushed mortgage lending into dangerous territory that set up the bubble. (See the chapters in Housing America on Fannie Mae, Freddie Mac and the mortgage meltdown by Lawrence J. White and Stan J. Liebowitz for this deeper analysis.) But Bob points out that the film focuses on a small group of heroes: savvy financial investors and hedge-fund managers who identify the bubble and unveil the corruption (moral and institutional) that leads to the economy’s collapse. These prescient financial geeks are given a surprisingly good turn because unlike many (most?) other films these capitalists have dimension. They aren’t rapacious “greed is good” businessmen. They have a heart, and a soul, and this moral core is critical to the plot and the tension that keeps viewers engaged (as well as extraordinary editing).

Particularly noteworthy is the character of Fred Baum played by Steve Carrell. At a key point in the climactic final act, Baum has to make a decision about whether to cash out and reap the financial benefits of his bet that the economy would burst—he “shorted” the economy, hence the title The Big Short—or keep on crusading against Wall Street corruption as a lone but noble wolf. He is torn by his obligations to his family, coworkers, and investors (who would be ruined if he didn’t sell), and his desire to go after the bad guys.

In another era, the decision to sell would be cast as the tension between greed and the desire to take a Don Quixote-esque path to purge his beloved industry of the corruption. Instead, Baum wrestles with the practical consequences of both choices. No one feels good at the end of the movie, but no one feels dirty either. Capitalists, even hedge-fund managers, are human. They have a sense of right and wrong, they act on their convictions, but these yeomen of the financial world also bow to the practical realities of the world (and industry) they live in. They may capitalize on a broken system, but they never become part of the corrupt system itself.

The moral quandaries that drive the lead characters are important to the plot, and the film’s resolution. I think this is important. Adam McKay, co-writer of the screenplay and the film’s director, is no capitalist apologist. At a forum at the Brookings Institution on the eve of the academy awards, McKay is clear that he believes Wall Street is corrupt, “captured” by the Big Banks. Indeed, The Big Short ends chastising the system, and noting that only one minor player was convicted of fraud while hundreds of others went without consequence. (Financial columnist Gregg Ip pushed back at the forum by claiming it was really stupidity, not fraud, and the principals lost the most money. I am sympathetic to the charges of corruption in the system, although, like Greg Ip, I’m not sure it rises to the level of criminal negligence or corruption.)

I might be willing to chalk this up as a pleasant surprise at the box office, a one-off, if I hadn’t also seen something similar in, of all movies, Jurassic World. This 2015 box office juggernaut, became the first film to gross $500 million in its opening weekend and the fastest movie to top $1 billion. As the fourth movie in the Jurassic Park film franchise, inspired by the novels by Michael Crichton, I expected the story and plot to be somewhat stale. But the story had a much richer plot than previous films in the franchise and the businessmen had much more dimension.

In the fourth movie, the Masrani Corporation, a multinational conglomerate, has reopened the park, but the story line makes clear that they’ve done their due diligence to keep it safe. Of course, as a sci-fi action film, everything goes wrong. That’s the conflict that drives the drama. But the failure in Jurassic World is not a moral or ethical one implicitly rooted in the hubris of business, or even cast as an inherent flaw of the capitalist system.

The Masrani Corporation, led by CEO Simon Masrani, is “socially responsible.” When things start to go wrong, he does not ignore or deny his responsibility. In fact, he takes charge, first trying to manage the situation and then ordering the destruction of the prized rogue dinosaur. He even leads the team to kill it (and dies in the process). Masrani’s character is noble, heroic, and human centered. This isn’t quite redemption, but it’s a refreshingly more nuanced approach to corporate enterprise than what we typically see in Hollywood films (or indie films).

Capitalists don’t get off with a free ride. The principal antagonist in the story is also a businessman: Vic Hoskins. He is head of security for InGen, the company that creates the dinosaur clones, but he has turned the security division into a weapons manufacturer and trader. Hoskins is a much more conventional capitalist bad guy: He sees dinosaurs, namely velociraptors, as a revenue generator for his military weapons company, which is a subsidiary of the Masrani Corporation. But, in an instructive subplot, it’s clear Hoskins is an amoral opportunist who puts the proverbial search for gold above ethics and relationships. He takes advantage of organizational weaknesses, even in an organization that appears to be run by a competent leader and ethical businessman.

I am hopeful that these movies might be a harbinger of the future for capitalism in film. By merely establishing an alternative paradigm for business leadership and management imbued with courage and nobility, Jurassic World’s plot and story line creates a more complex and nuanced depiction of private enterprise than typical of films. Similarly, The Big Short puts financial hedge fund analysts and managers at the moral center, grappling with real ethical dilemmas, as keys to the plot’s resolution. Both films are nested in a more nuanced vision of free enterprise more consistent with the ideas of Adam Smith, viewing the market as a system of production and distribution rooted in an embedded system of social ethics for its success.

Moreover, neither film is a direct critique of business or capitalism. Rather, the character of the individuals, rather than the institutional forms, determine the outcomes of markets and the goals of enterprises. This is less visible in The Big Short, but even in this film the viewer is left with the impression that the problem can be fixed and it’s not inherent in the capitalist system. To the extent the enterprise is seen as value neutral, this is a step forward in popular culture since private enterprise is usually directly associated with moral corruption.

Neither movie should be seen as a paean for capitalism. But the fact Hollywood screenwriters are finding the tension necessary to drive a successful plot with more nuanced characters from business and industry, however, may be laying the groundwork for future movies to be even more bold. Only time will tell us if this more nuanced depiction of business and enterprise becomes an ingrained part of mainstream storytelling in film.