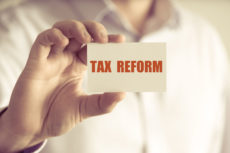 It appears the Congress is getting closer to passing a tax reform bill. While there are differences between the current House and Senate versions, they are close enough that it is easy to see that they can be reconciled and tax reform legislation can be passed this year.

Reform on the individual income tax looks like some tinkering with its provisions, not a major reform. The major reform is in the corporate income tax, which would significantly lower rates and provide other benefits.

On the individual side, rates will not change much, and the reform package will benefit some taxpayers and harm others. The biggest change is a substantial increase in the standard deduction. This means fewer taxpayers will itemize, making it politically easier to eliminate itemized deductions, but by-and-large, neither the House nor Senate versions take advantage of this.

Both versions are not worse than the current individual income tax structure, but they are not much better either. Some taxpayers will pay less because of the tinkering, some more, but Congress is passing up the opportunity for a more substantial reform.

On the corporate side, both House and Senate versions cut the rate from 35% to 20% and allow full expensing of short-lived capital investment. Both are desirable changes. We have been lamenting business investment flowing overseas and have been proposing various alternatives to keep investment at home. The best way to do that—and to attract foreign investors—is to make investment opportunities more attractive, so corporations and investors want to invest in the U.S. This tax reform has a number of provisions that do that.

Why is it that most of the substantial tax reform is aimed at the corporate side, with only tinkering on the personal side? One reason might be that most individuals do not pay much attention to what Congress does, because individuals can’t do much to affect what Congress does. Corporations invest in lobbying and have a heavy presence in Washington, giving them more influence. Congress is aiming the major tax reform at corporations because they—not individuals—are the ones who are paying attention.