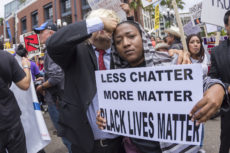 Last year I put up a blog post on the Black Lives Matter movement, saying that the movement had a valid complaint about the excessive and too often fatal use of force against unarmed and too often innocent blacks. I believe I received more comments on that post, both positive and negative, both on this website and through private correspondence, than on any other of my posts.

A year later, I still agree with the BLM argument that excessive force has been used against blacks partly because of their race. The BLM movement has probably done some good by publicly airing the issue, and likely has restrained some law enforcement officers who otherwise might have been overzealous in their actions.

My perception is that their arguments about overzealous police actions against blacks is correct, partly because in the internet age I’ve seen videos that appear to confirm it. I also think the argument has the moral high ground in arguing against abuse of government power. And, I think their complaints about excessive use of force by the police is powerful enough to gain sympathy from everyone, regardless of race.

Thus, I am disappointed that the BLM movement has lost its focus on excessive use of force by police, and gone on to project an us-against-them mentality, which will always be a hard sell when the “us” is in the minority.

This story describes a BLM organization that is explicitly anti-free speech, and that claims “liberalism is white supremacy.” Actions like this undermine the group’s appeal to a broader audience, and therefore undermine its efforts to call attention to and reduce police brutality.

If the BLM movement is saying “we don’t want the police killing us on the streets,” I’m completely with them, and they should get widespread support on that message. But if they are shutting down campus lectures, protesting against free speech, and projecting an us-against-them message where us is blacks and them is everyone else, it’s easy to see that they are unlikely to get the support of everyone else.

A year ago my thought was that the BLM movement had a valid complaint, and I still think so. On that one issue, they should get lots of support. That’s where the BLM movement started, but it has lost its focus, and regrettably so, because it weakens their ability to make progress on the very real issue of excessive use of force by the police.