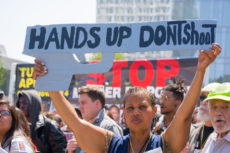 My initial reaction to the Black Lives Matter movement, like many old white guys, was that All Lives Matter. But recent events have changed my thinking on this.

Everyone should be treated as an individual and not judged based on personal characteristics over which they have no control. That doesn’t always happen, but a free society does not force people to deal with others except on terms that are mutually agreeable. If someone discriminates based on race or any other characteristic, those discriminated against must deal with this as best they can. People can’t be forced to drop their biases.

My new thinking: When those who hold racial biases also hold government-issued firearms and are given a mandate to go after the bad guys, this is life-threatening to those who the people with the guns and the mandate are biased against. Everyone who is reading this is well aware of the number of video recordings of white cops killing black victims who posed no immediate threat to anyone.

On the rare occasions when I’m stopped by the police, I’m a bit nervous about it. If I were black, I would have good reason to be terrified.

I place some of the blame for the current situation on the war on drugs, and some on the way police are trained.

As for the war on drugs, any victimless crime requires that law enforcement actively search for violators, because those violating the law are trying to keep their activities hidden, and nobody has an incentive to report the activity. Victims of robberies or muggings report those crimes to the police and want the police to help them. Buyers and sellers of drugs want to hide what they are doing from the police, who then have to come up with various pretenses to try to detect drug activity.

It creates an adversarial relationship between police and citizens. All citizens. Because the police don’t know whether you’re a drug dealer or a drug user, everyone’s privacy is subject to violation and everyone is a suspect. But if police suspect that some races are more likely to be involved in drug activity than others (even if it is true), those people are subject to more invasive policing, and the relationship between those people and the police is even more adversarial.

As for the way police are trained, I have a minimal amount of firearms training, most of it from law enforcement personnel, and my views are partly based on that training. I admit up front my training is minimal and welcome anyone to provide more information and set me straight if I’m wrong. Two things have bothered me about the training I’ve received.

First, there was an emphasis on using a firearm to get a “bad guy.” That’s the term that was used over and over again. I’ll agree that muggers, home invaders, and carjackers are bad guys. Because of the law enforcement background of the people who ran the courses I took, I assume that they are trained using the same language. Their job is to get the bad guy. This type of training creates an adversarial mindset among law enforcement personnel, in contrast to “the policeman is your friend” type of propaganda we’ve heard.

When the police stop someone for questioning, the officer’s mindset isn’t “I’m your friend,” it is “there is a good chance this is a bad guy. That’s why I’m questioning him.” Combine that with a racial bias, and it’s bad for blacks.

Second, I’ve done some scenario training, also run by law enforcement personnel, and the heavy emphasis in the training I had was on shooting quickly to neutralize the threat. Something bad was always happening in those scenarios. It was never a mistake to draw and shoot quickly. The mistake was to fail to recognize the threat until the “bad guy” had the upper hand.

Think about the recent police shootings in this context. Police are trained that they are going after bad guys, and they are trained to react quickly to neutralize any perceived threat. Those police were just doing what they have been trained to do.

The war on drugs combined with the nature of police training makes police view themselves in an adversarial relationship with citizens. Combine this with the increasing militarization of the police, and the police start to look more like an occupying force rather than the protector of our rights.

The situation is unfortunate for everyone, but when a group of people find themselves more suspect just because of their race, it’s especially bad for them. Sure, all lives matter. But black lives are the ones most threatened by the ever more adversarial police state.