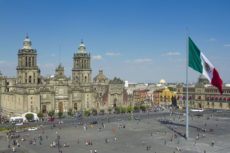 A melancholy saying reminds us that you can’t go home again. I know I can’t. My parents have been dead for decades, and my brother Bill, my only sibling, died three years ago. Moreover, the house in which we lived when I was growing up in the late 1950s and early 1960s has been wiped from the face of the earth. Only a few old timers might recall that on a certain spot of now-bare ground once stood the house in which Jess Higgs and his family flourished some sixty years ago.

Yet, if you cannot go home again, it may happen that home can come to you, as it has come to me in a heart-warming way since my emigration to Mexico two years ago. Here in Mexico I live in a remote place with very limited local availability of groceries and other ordinary consumer goods. Fortunately, however, three times each week Lucio, an enterprising fellow from Bacalar, a town a hundred miles away, comes to my gate with his pickup loaded with fresh produce, eggs, pastries, tortillas, and other goods. (If we ask him to bring something he would not ordinarily bring, he brings it on a later trip.) Among the goods I routinely buy from him are cantaloupes, and often the label on the melons indicates that they were produced by Pappas Family Farms of Mendota, California.

Which takes me back to my boyhood. I grew up on the west side of the San Joaquin Valley, on a ranch about eight miles east of a little town called Firebaugh, which is itself about 45 miles or so west of Fresno. When I was growing up there, Firebaugh called itself the “Cantaloupe Capital of the World.” (I notice that recently this claim is being made by Mendota, a town about nine miles down the road from Firebaugh.) During the summers of several years in the late 1950s and early 1960s, I worked at General Box Company’s facility just outside Firebaugh, where materials were prepared for the shipping of cantaloupes packed in wooden crates loaded into iced-down railroad cars. (That technology has been superseded in more modern times.) Among my jobs at General Box was operating a machine that put labels on the end slats of the crates. These labels were colorful and artistic identifications of the various growers, including Pappas Farms.

So, today, when I buy a cantaloupe brought to me in the far reaches of the Mexican state of Quintana Roo, I immediately feel a link to my boyhood and relive at least for a few moments the youthful joys of that long-ago time and far-away place.

I recognize, too, with immense gratitude the debt I owe, along with many others, to the entrepreneurs who make the world of commerce serve the needs of consumers so beautifully. George Pappas, who founded Pappas Family Farms, back in the 1930s, had immigrated a few years earlier from Greece. Like so many other immigrants, he did not settle for being a lifelong wage worker, but ventured to take the risks and make the demanding efforts required to establish a successful firm. The longevity of his creation speaks for itself. But let us not forget my amigo Lucio while we are celebrating and expressing gratitude for entrepreneurship. Lucio is never going to rival Bill Gates in his accumulation of wealth, but he works wonders to make life in my little community here in Mexico more livable and joyful.

Thank God for the entrepreneurs, both those who immigrate from distant lands and those who work among us every day to keep the wheels of commerce rolling. Today’s world is utterly reliant on entrepreneurs. Their willingness to bear risks and their skill in appraising how they might best serve consumers make life possible, not to mention comfortable and often delightful, for the earth’s huge human population. They are at work everywhere—in the USA, in Mexico, and in the enormous movement of goods and services between these two great economies.

It is nothing short of tragic, as well as utterly foolish, that the Trump administration is devoting itself to impeding and distorting such commercial entrepreneurship between the USA, Mexico, and other countries. Let us hope that even in Washington, D.C., some of the economic dullards and political opportunists will rouse themselves and decide to desist from their current, destructive policies.

Robert Higgs is Senior Fellow in Political Economy at the Independent Institute. His most recent book is Taking a Stand: Reflections on Life, Liberty, and the Economy.