Is Trump Destroying the GOP? 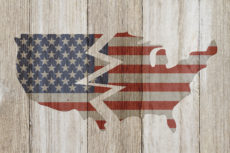 Of all the concerns raised about President Donald Trump and his behavior in the Oval Office, perhaps one of the more sobering one is the way he and his allies have elevated a minority position within the GOP to a dominant policy agenda at the national level.

Throughout his primary campaign, Trump spoke to his base by consistently harping on populist policy proposals such slowing or stopping immigration by building a wall along the Mexican border, repealing Obamacare, renegotiating or pulling out of NAFTA, and lowering corporate taxes. He also leveraged his business background to legitimize a bold, no holds barred approach to governing the country without any critical thought to how top-down business management approaches might undermine democratic institutions.

While these agenda items consume public debate today, however, they represented a minority position within the Republican Party when he began his candidacy in 2016. In fact, Trump remained a minority candidate within the GOP up until the last month of the primaries.

As the chart below shows, Trump did not win a majority of GOP primary votes in any state until April 19th when New York became the 34th state to vote. Seventy-four percent of the party’s votes had been cast by that time, and just 37% of Republican Party voters had thrown their lot in with Trump. The majority of Republicans were voting for other candidates, specifically John Kasich, Ted Cruz, and Marco Rubio. While Trump secured 45% of the parity’s votes by the end of his primary run, a competitive final stretch could have slimmed his share of the vote going into the convention to under 40% based on earlier voting trends. 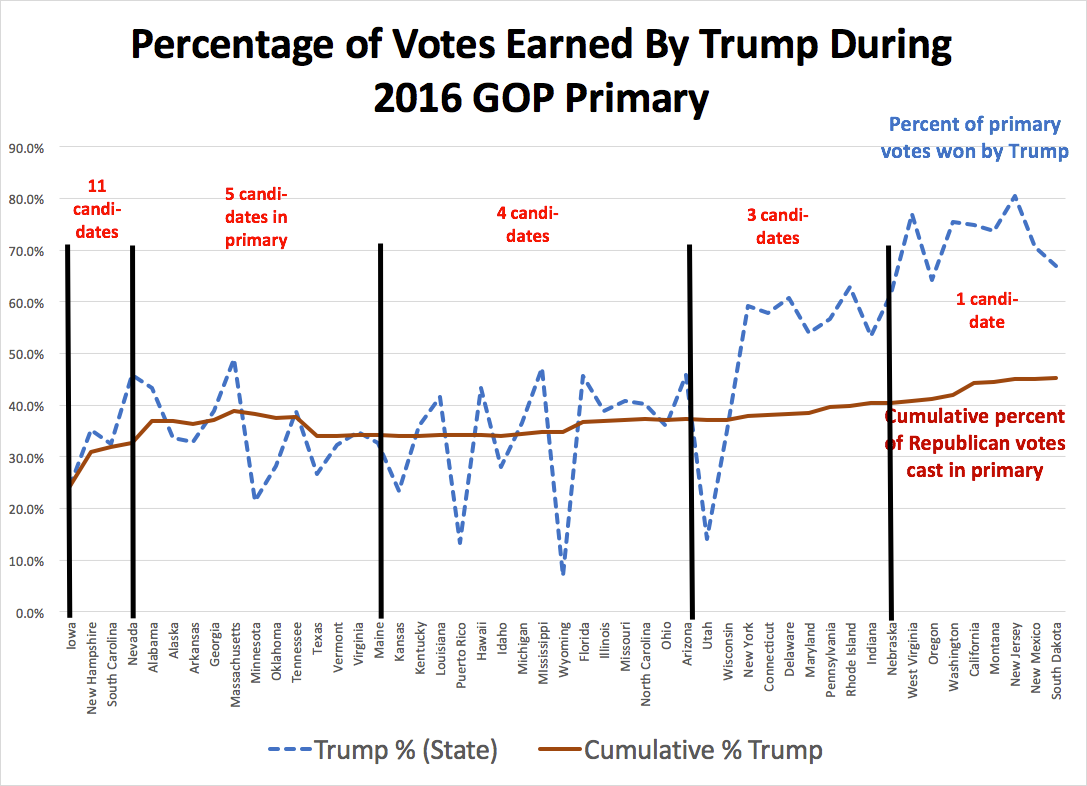 Trump supporters, of course, were loyal block voters. They consistently delivered between 30% and 40% of the vote to his presidential bid. This is a non-trivial number, but well short of a majority or what would be needed to be considered a consensus candidate. Thus, Trump benefited considerably from a large candidate pool that didn’t provide viable alternatives until the primary season was two-thirds gone.

By then, however, the proverbial writing was on the wall. Trump started to chalk up majority wins consistently. Notably, many GOP voters still resisted his candidacy. He did not pull two-thirds or more—consensus range—until he was the lone active candidate in the waning days of the primary.

Many politicos thought that President Donald Trump would be more open and inclusive once most Republicans backed their presidential nominee. Clearly, Trump’s actions during his first year in office have shown little willingness to drift from his message or his base. He has successfully trumpeted his presidency and election win as a mandate to implement populist priorities and has been tone deaf to dissenting voices outside his cabal of loyalists.

Perhaps Trump believes that the rest of the GOP will see the error of their ways and fall in line behind him. More likely, he will continue to divide the GOP as he and his supporters consciously shake the party from any moorings in principled conservatism.

This does not bode well for the Republican Party. The United States, as Grover Norquist at Americans for Tax Reform consistently observes, is center-right and fiscally conservative (see an earlier post on the political implications here). A more likely outcome is that economic nationalists and populists will continue their scorched-earth policy of alienating key blocks within the shell of the current party. GOP majority within the shell of the current party. In this case, the Republican Party may well have elected its last national candidate.

The question then becomes: Will an alternative rise in its place to compete with the Democratic Party?