Was Hillary Clinton’s Progressive Presidential Bid Doomed from the Start? 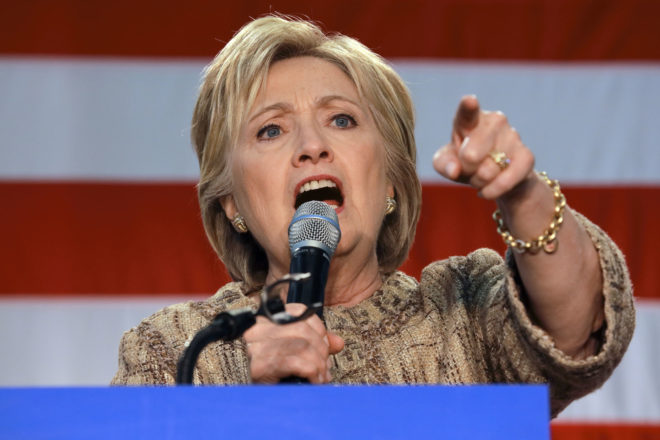 Hundreds of thousands of people protested Donald Trump’s presidential election win, many believing he “stole” the presidency because Clinton “won” the popular vote. Digging below the surface of the November 2016 election results, however, suggests that Clinton’s presidential bid was doomed from the beginning. Moreover, the popular vote “win” may actually have been a result of conservatives in the “never Trump” camp crossing party lines, raising intriguing questions about whether she could have even governed successfully if she had won.

Most Americans, including those at the top levels of the Trump campaign, were shocked as Hillary Clinton’s presidential bid crumbled at the polls. She ended up with a popular win of 3 million votes, but this still represented a minority, just 48 percent, of the voting public. Most national polls failed to predict the outcome, prompting industry experts to do some serious soul searching. Their problem, however, may have been less methodological (e.g., sampling bias, survey design, or other technical issues) and more a failure to pay attention to fundamentals.

One person who pays keen attention to political fundamentals is Grover Norquist, head of the anti-tax advocacy organization Americans for Tax Reform (ATR). After the election, ATR compiled revealing data about politics on the state level with profound implications for interpreting the national election results and thinking about the future of politics in America. Most Americans, it turns out, live in states where Republicans have a virtual lock on state policymaking. More than half of the U.S. population, 162.3 million, lives in 25 “Red” states where the GOP controls the governor’s office and the state legislature (both houses). This is not a trivial accomplishment. Securing and maintaining this kind of partisan control is very, very difficult. A reasonable interpretation of this result is that a majority of Americans live in states where the Republican Party political platform resonates more deeply and directly than the Democratic Party platform. 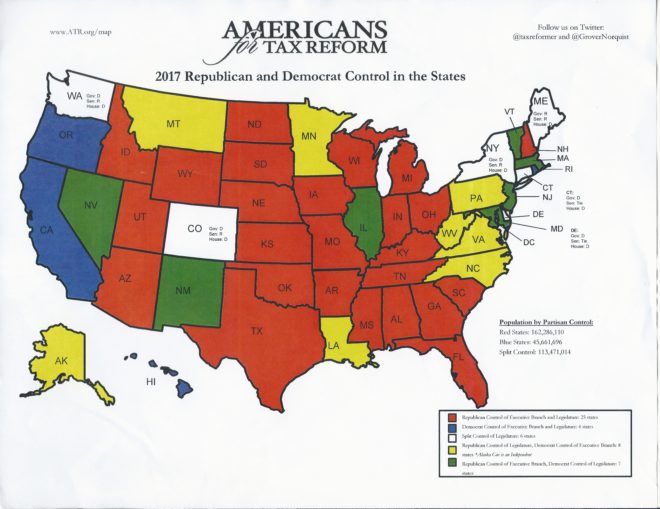 Democrats control the governor’s office and legislature in just four states: California, Oregon, Hawai’i, and Rhode Island. The population of these states amounts to 45 million people, or 17.3 percent of the total U.S. population. Eighty-five percent of the population in these “Blue” states reside in California. So, the Democratic Party is really the party of California. The remaining 65 million people, 35.3 percent, live in states where political power is split.

But there is another significant part of the presidential election story. For the first time in decades, one candidate—Donald Trump—had broad-based, organized opposition from within his own political party to the point where some of the party’s most prominent supporters urged other Republicans to defect and vote for Hillary Clinton in the national election.

A look at the exit polls gives us a few clues about importance of these defections. The New York Times estimated that about 15 percent of Clinton voters indicated they were conservatives. About 10 percent of Trump voters indicated they were liberals. CNN’s exit polls estimate 16 percent of conservatives voted for Clinton while 10 percent of liberals voted for Trump. (More than half of moderates voted for Clinton according to both exit polls.) Thus, Clinton benefited from a 5 percent to 6 percent net increase in cross-over votes due to ideological defections. In other words, conservatives crossing party lines may have represented somewhere between 2 million and 3 million popular votes, about Clinton’s general election popular vote margin over Trump. Trump, it turns out, helped Clinton because he alienated conservatives, not because she drew in more moderates.

The implications for national policy are pretty stark. The Democratic Party appears wildly out of sync with mainstream American political sentiments. Candidate Hillary Clinton branded herself as the successor to Barack Obama’s progressive political agenda. She didn’t secure a majority of the popular votes at the ballot box, and would likely have fallen significantly short of a plurality with a candidate less polarizing than Trump. The Democratic Party’s progressive agenda can claim control of the policy making apparatus in just four states, and they hold a small share of the U.S. population. By implication, the progressive political agenda embodied in Obama’s tenure as president has been devastating for the Democratic Party.

These data are somewhat heartening for the Republican Party. Trump did not bring the Republicans to power at the state level. The state-level success is part of a broader trend most likely triggered by the election of Obama in 2008, the progressive Big Government response to the Great Recession, the rise of an ideologically coherent (in the early stages) opposition Tea Party, and the 2010 midterm elections that gave Republicans control of the U.S. House of Representatives. Trump was in the right place at the right time to ride this wave, but he is not generating or inspiring it.

Whether Republicans stay in control rests on answers to two questions. First, can the Democratic Party regroup and pull itself together along a more moderate agenda in line with American mainstream values? Second, can the Republican Party survive what appears to be an inept, amateurish, unprincipled, and unstable Donald Trump White House?